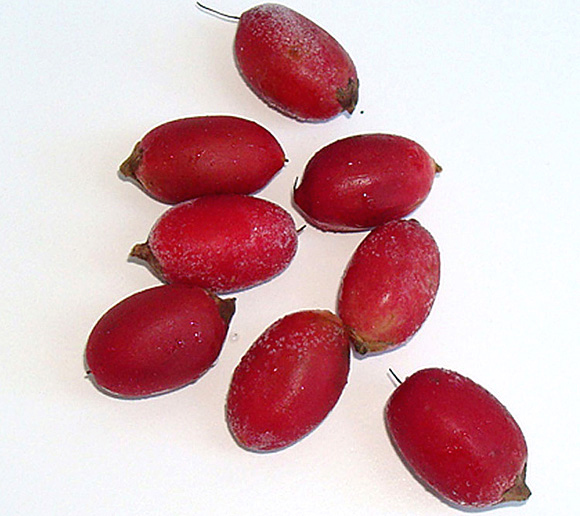 Hallelujah, I’ve experienced a miracle — albeit a modest one.

It didn’t involve seeing Jesus on a tortilla or the Virgin Mary in a rust stain on the side of a building. No, my miracle involved a teeny-tiny red berry known as “miracle fruit.”

Haven’t heard the buzz on this fruit, Synsepalum dulcificum, that’s native to West Africa? Well, brothers and sisters, let me fill you in. I’ve been intrigued by the fruit ever since reading a New York Times story about it in May.

This small fruit purports to have an amazing effect when eaten: It changes the taste of anything you stick in your mouth afterwards, particularly things that are sour or bitter, leaving them seemingly sugary sweet.

Admittedly, I was more a curious skeptic than any kind of true believer. So when my friend, Elaine Villamin, winemaker at her family’s Eden Canyon Vineyards in Creston, Calif. (believed to be the only Filipino-American estate winery in the country) asked me to come to a miracle fruit event she was hosting last weekend, I jumped at the chance. Elaine planned to have attendees test the reaction of the fruit on her wines, as well as a variety of other foods, including Tabasco, white vinegar, pickles, Spam, and her homemade pot roast. Talk about a rather curious last supper.

The event was held at Periscope Cellars in Emeryville. Trivia fans will note that its warehouse area was the set for the first season of Bravo TV’s “Top Chef.” The Kenmore appliances are still there as proof.

About three dozen folks forked over $12 in hopes of having a miracle last Saturday afternoon. The seeds ($3 each and just a tad larger than pomegranate ones) were picked just a couple days ago in South Florida, where they are grown by Curtis Mozie who sells them through his Web site.

We were instructed to pop the seed into our mouth, to suck on the smidgen of pulp that’s pretty tasteless, then spit out the bitter seed. We also were told the effect of the protein, miraculin, would last about an hour. Then we made our way around the tables set up with condiments and foods, trying each with eager anticipation.

Was there an earth-shattering epiphany? For me, not an enormous one. After reading the Times’ story, I expected a more dramatic difference; I expected everything to taste like candy. Although it didn’t, there were still some definite marvels.

We tried sucking on a lemon wedge first. A couple people around me said the lemons tasted like lemon sorbet to them now. Lynne Char Bennett, a San Francisco Chronicle food writer who also was at the event, thought the miracle fruit made the lemon taste like Splenda. I thought the lemon now tasted like fake lemonade or even a little like Chinese salted plums.

Salty foods such as anchovies and Spam tasted less salty now. Other tangy ingredients such as sour cream, white vinegar, and pickles tasted only marginally less sour. The red wines became less complex because the tannins were muted.

For me, the biggest differences occurred with fresh strawberries, which tasted so very ripe and sweet, bordering almost on strawberry soda; and Guinness, which tasted a bit like chocolate milk, its hoppy bitterness all but obliterated.

Because taste is so subjective to begin with, I’d surmise that the impact of miracle fruit differs from person to person. My husband also wonders if tasting in a group situation like this also might affect someone’s perceptions differently than if that person were to do the tasting alone.

Farmer Mozie is experimenting with miracle fruit to see if it might have some useful applications in the future for those who suffer from diabetes. But that might be a struggle since the fruit is so expensive, can be difficult to grow, and because the Food and Drug Administration ruled against its use as a sugar substitute in the 1970s.

If you’d like to become a disciple of miracle fruit, Elaine hopes to have more tasting events in the future. Just monitor her winery’s Web site for more details to come. Because this first tasting sold out almost immediately, it might help to say a prayer to ensure you get into the next one.