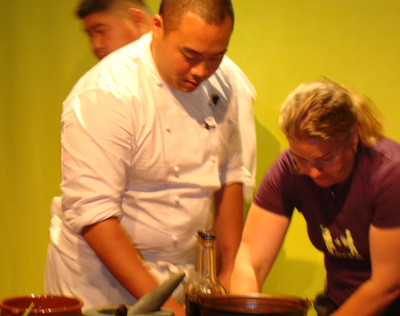 If you missed this weekend’s Slow Food Nation event in San Francisco, you’ll still be able to enjoy a part of it on the Web in the near future.

Cooking demos in the “Green Kitchen” were filmed and will be posted on YouTube at a future date. I got a chance to sit in on two of the demos, the first featured Alice Waters of Berkeley’s Chez Panisse making vinaigrette with her 25-year-old daughter, Fanny Singer, who was on break from grad school. The second featured maverick New York chef David Chang, who created his take on caprese salad, in which he substituted tofu for mozzarella, and shiso for basil.

Alice Waters has long been associated with salad, having almost single-handedly popularized mesclun mix in the United States. Fanny said her mother’s salad was probably the first food she ate in puree form when she was a baby.

“Salad is my favorite thing to cook,” Fanny said. “When I say that, my friends all say that there’s not much cooking to that. But there is a lot involved in making a good salad.” It starts with carefully washed leaves that have been dried completely so that the dressing will adhere to it better and the greens will be crisper. Then, there’s the vinaigrette, which Waters says, should not shock you with its tartness, but give you a pleasant brightness.

Such care is taken with her salads that Waters said it used to take one person eight hours to wash and dry all the salad leaves when Chez Panisse first opened.

Decades ago, when Playboy magazine named Chez Panisse the seventh best restaurant in the country, Waters flew to New York for the big gala event. She decided to make salad as her dish. She picked all the lettuces from the garden at the last possible moment, carrying them on the plane still covered in dirt (imagine getting that through security today).

She borrowed a big salad bowl from her friend, cookbook author and cooking teacher, James Beard, and proceeded to make her simple, tossed salad. When she walked into the event carrying her salad, she saw that “all the other 24 chefs were men. And they all had ice sculptures. I was mortified!”

But Waters got the last laugh. “The next day, the journalists didn’t write about the ice sculptures; they wrote about my salad.”

Up next was Chang, the James Beard-award-winning, Korean-American chef known for his foul language, hot-headedness, cocky demeanor, surprising friendship with Waters, and his gift for transforming Asian street-food staples into modern masterpieces. His three Momofuku restaurants in New York City (Momofuku Noodle Bar, Momofuku Ssam, and Momofuku Ko) are among the hardest tickets in town.

After working at Craft and Cafe Boulud in New York, Chang decided fine-dining just wasn’t him. He wanted to do something else — to make the best-tasting casual food around.

“I didn’t think I could be a four-star chef,” he told the audience. “So I thought I’d sling noodles downtown instead.”

After working in ramen and soba shops in Japan, he returned to New York to open his own noodle bar. The rest is culinary history.

As he sliced brilliant-hued heirloom tomatoes, he said, “We don’t have the green markets (farmers markets) like you guys have in San Francisco or California. I’m very bitter about that!”

Chang stirred together his vinaigrette, using grapeseed oil instead of olive oil because he didn’t want to recreate an exact Italian dish. In went a drop of sesame oil, some sherry vinegar, and soy sauce. A sprinkling of sesame seeds over the tomatoes and tofu completed the dish.

He loves adding sesame seeds, he explained, because they add a subtle crunch and texture. “Sometimes when we make this salad at the restaurant, I’ll throw in a frozen tomato just to freak people out. I just like the surprise of texture.”

When asked why he traveled all the way from New York to the Bay Area for this event, Chang’s answer was simple, humble, and said it all.

“Why? Because Alice asked me to.”