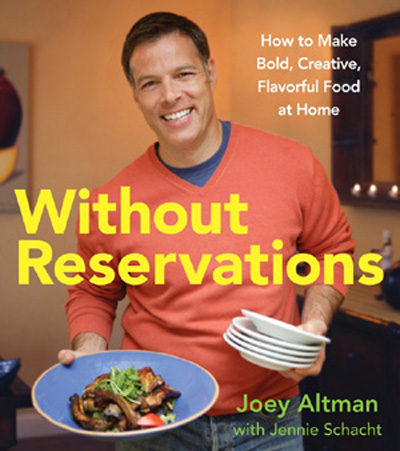 For the past nine years, Joey Altman has been a familiar face on TV as the host of KRON’s “Bay Cafe,” where he’s welcomed us into his home and into the kitchens of some of the region’s best restaurants.

Nine months ago, the award-winning show sadly went off the air, the victim of the dismal economy and the unfortunate lack of a major sponsor, Altman says.

His first cookbook also was published this year: “Without Reservations” (John Wiley & Sons), which is filled with tips and recipes for cooking boldly flavored dishes at home.

I caught up with him recently to talk about life after TV, his disdain for TV dinners, and his favorite TV and music idols.

Q: I remember when “Bay Café” first aired. Would it be fair to say that you weren’t nearly as ease on TV as you are now?

A: I was horrid the first 200 shows. They’re unwatchable for me. I was just ‘on’ as opposed to ‘being.’ I’ll go on a show now, and I’ll see other people practice bullet points in front of a mirror. I can’t imagine doing that today. I don’t think about it anymore. I just ‘do.’

Q: Was it sad for you when “Bay Café” ended?

A: I was very sad. All of my life has been a series of 90-degree turns. It requires one door to close for another to open. I’m confident I’ll find something. I won’t sit at home and pick lint out of my belly button.

I love the diversity of my career. I’d like to do another cookbook, more consulting on restaurants, and to play with my band (the Back Burner Blues Band, made up of fellow Bay Area chefs), and to a business project that would give me some sort of equity.

Q: Would you like to open another restaurant of your own?

A: God forbid. Not with three young children at home. Knowing what it takes to really make a restaurant work, I don’t want to sacrifice that much in my life right now. As it is, I’m doing 16-hour days at Miss Pearl’s. I’ll be there a couple more months. 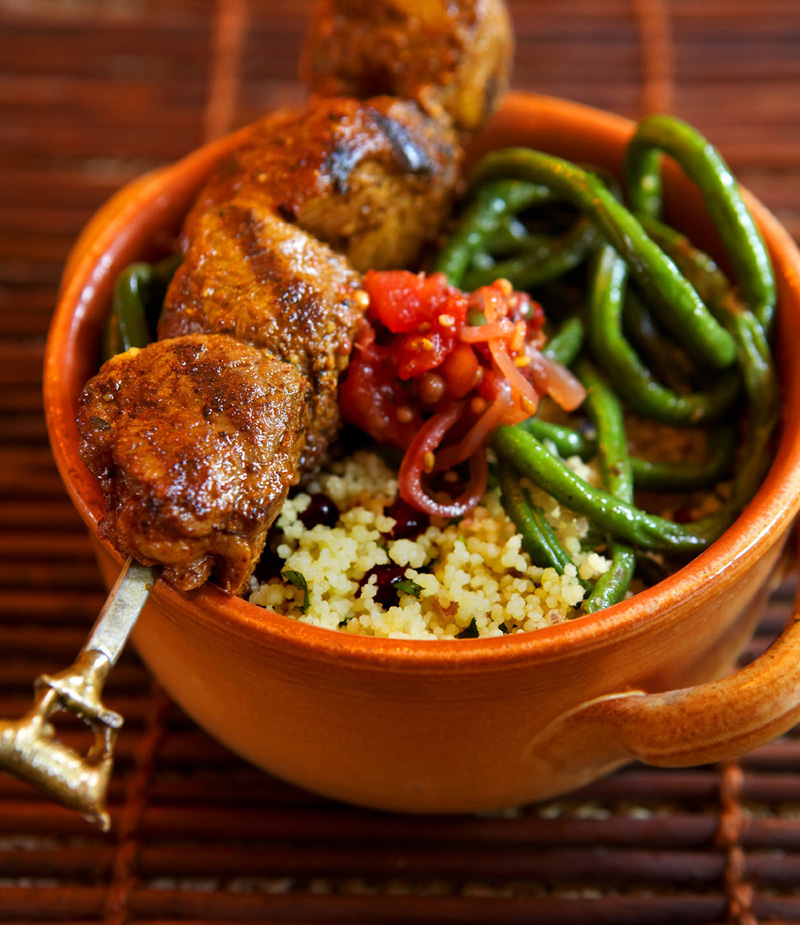 Q: Is the new Miss Pearl’s similar to the original one?

A: The sensibilities of both are the same, but it’s really the evolution of the original as if it had continued to grow. The signature dishes are there and the funky drinks. We’re also embracing things that have come on the scene since then — sustainable and local. The cooking there isn’t trendy; there’s not a lot of sous vide or foams happening there. It’s just more sophisticated because the environment is more so than it was before. There are elements of whimsy there. It’s bold flavors that are really dynamic and evocative of island cooking with lots of chilies, ginger, and lime juice.

Q: If you could trade places with anyone on TV, who would it be?

A: David Letterman or Conan O’Brien. They have the greatest gig in the world. They get to interview really interesting people.

As far as cooking shows, I like the new Jamie Oliver one where he’s cooking at home.

Q: Did you always know you wanted to be a chef?

A: Yes, from the time I was 16 years old. Then, when I went to France when I was 19, I was certain. I love the mix of creativity, and physical work, and doing something that gives other people pleasure. There’s an immediate gratification. It’s not like when you work in finance, and then you wait until the end of quarter to see if it’s ‘wow,’ or ‘that sucked.’ You know immediately if it came out good or if it sucked. I have a very short attention span. When I was young kid, I was a troublemaker, I was hyperactive. I would get myself into trouble with my parents. When I started cooking, it was something I liked that I actually got praise for, and not in trouble for doing.

Q: Do you come from a family of great cooks?

A: My grandmothers on both sides were fantastic cooks. My Mom says she was a great cook, but my parents were working when I was a kid. I ate one third of all Swanson Salisbury steaks produced. I had more TV dinners than I know. I can’t even look at one today.

Q: Given your schedule, who does most of the cooking at your house?

A: Me. I do 98.9 percent of it. My wife, Jaemie, will make a tuna casserole once a quarter. When I’m not home, I come home to Chinese food or pizza boxes.

Q: Are your kids adventurous eaters? Or do you have to make them separate meals from what you and your wife are eating?

A: Johanna, 14, is starting to become adventurous. My youngest, Piper, 3 ½, used to eat anything, but now is more picky. The middle one, Caleb, 9, has never been adventurous. He likes only seven things. He has the most limited diet I know. He’s the anti-foodie.

I’ll only make different food for the kids if it’s convenient. It’s more likely, ‘Here’s dinner – take it or leave it.’ Kids don’t starve. They will eat.

Q: Do you think any of your kids will follow in your footsteps as a chef?

A: Piper likes to help me cook. We made chocolate madeleines the other night. She whipped the egg yolks with sugar. She wanted to taste it. She said, ‘It’s nummy.’ But when she grows up, she better be a high-powered attorney, making a lot of money. Whatever she does, she needs to make a lot of money to take care of her dad. (laughs) Seriously, you want your kids to be whatever they want to be.

Q:  So is the title of your cookbook, “Without Reservations,” a reference in any way to Anthony Bourdain’s show, “No Reservations”?

A: The title was decided years before Bourdain’s show. It really refers to having the motivation to get in your kitchen without worrying so much.

I knew the cookbook was going to be a lot of work. It took a good six months to write the recipes. Luckily, I had a lot of them in a rough form already. I spent four weeks straight, making everything. Then, I had them tested by other people. The hardest time was sitting at the computer by myself. I don’t work well like that. It’s not my milieu.

Q: How long have you been playing the guitar?

A: They both operate in a visceral, emotional, call-and-respond kind of way. You react to what you’re doing. You do it for yourself and for other people. Musicians do their best work in front of a live audience. Cooks do their best work when there’s a dining room out front. You think you know how it will come out, but it then takes on a life of its own. It’s in the moment, you eat it, and it’s gone. You play it, you hear it, and it’s gone. You rarely can play something the exact same way twice. You rarely can make something the exact same way. Flavors have all these variables, just like sounds do.

Q: If you could be any musician, who would it be?

A: Eric Clapton. He’s gotten to play with so many people. He’s so eclectic.

Q: Lastly, what type of music is most like your cooking?

A:  It would be a cross between blues and classic rock. It’s loud, in-your-face, got a good groove you can dance to, and doesn’t take itself too seriously. It’s not too cerebral; it’s for pure enjoyment. 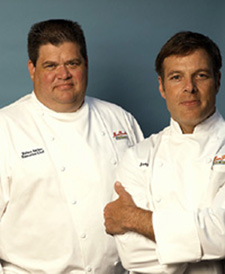 Put 12 wooden skewers in a pan of water to soak for at least 20 minutes.

Put lamb cubes and marinade into a large glass baking dish and toss, rubbing marinade all over lamb. Thread 4 to 5 pieces of lamb onto each skewer. Place skewers into baking dish, cover with plastic wrap, and refrigerate for at least 1 and up to 4 hours.

While lamb marinates, preheat a grill or broiler to medium-hot and prepare beans. Saute beans in remaining ¼ cup olive oil in a large skillet over medium-high heat, stirring frequently, until they are tender and begin to blister. Stir in butter, 1 teaspoon salt, and ¼ teaspoon black pepper. When butter just begins to brown, transfer beans to a warm serving platter and drape with foil.

Grill lamb, turning skewers every few minutes, until medium rare (internal temperature of 130 degrees), about 6 minutes. (Alternately, skewers can be broiled until medium rare.) Transfer skewers to a plate and let stand for 5 minutes.

To serve, place long beans to the side, and lay skewers across them.

From “Without Reservations” by Joey Altman