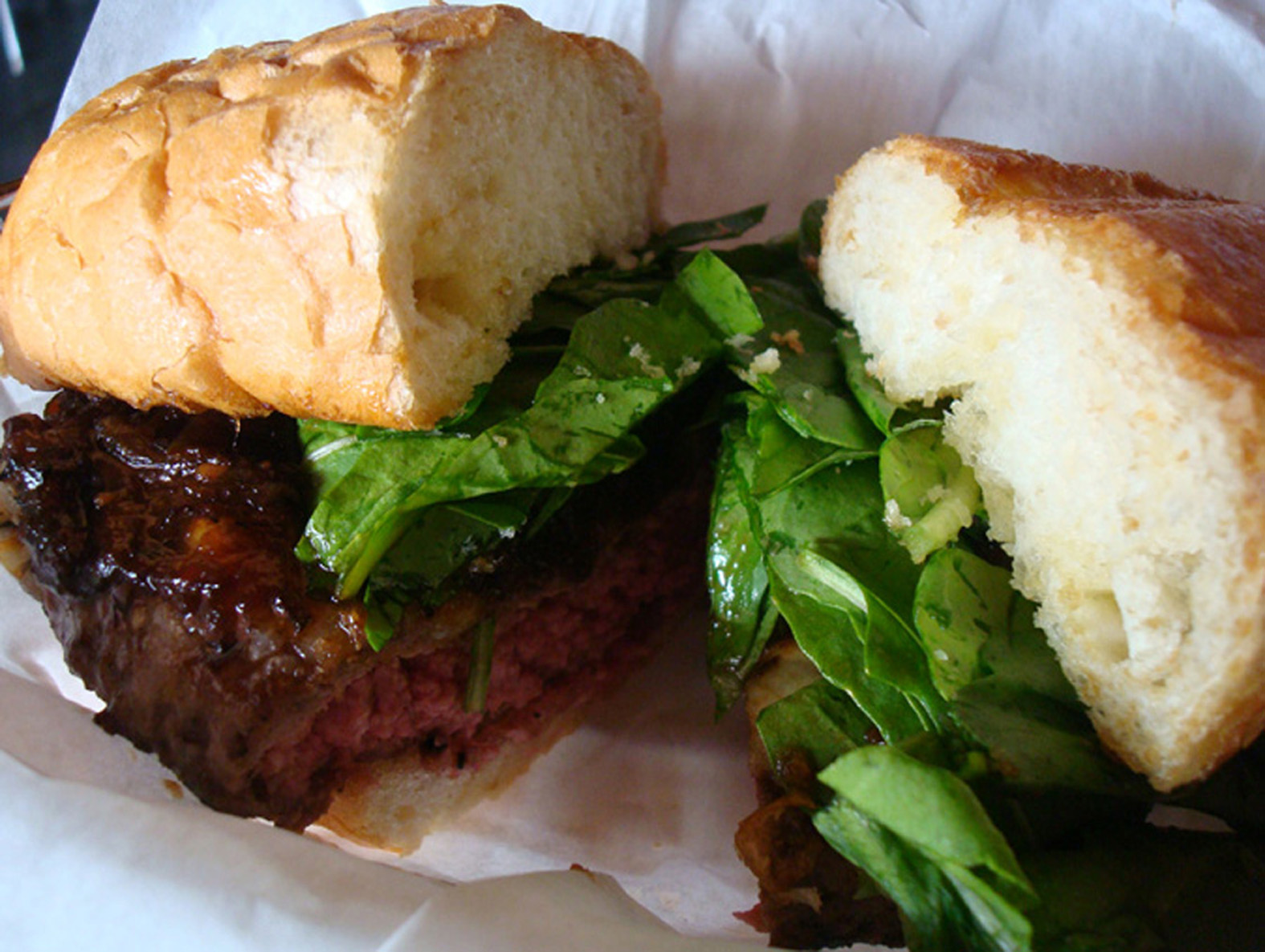 If a shrine could be built for a burger, fans of Father’s Office gastropubs in Santa Monica and Culver City would erect one to be sure.

Sang Yoon, a South-Korean-born chef who has worked with the likes of French culinary genius Joel Robuchon, turned his back on fine-dining to create these two casual, fun, hip pubs that serve gourmet bar food and 36 craft beers on tap. Smoked eel with poached egg and horseradish creme fraiche, anyone?

It is his “Office burger,”  though, that has got tongues wagging and teeth chomping for seconds. A $12 burger made of dry-aged strip steak, bleu cheese, arugula, and onions caramelized with a splash of sweet-tangy balsamic. It trounced other chefs’ creations in a “Today Show” cook-off. Esquire and Chowhound fanatics have labeled it the best around. Indeed, foodies have deemed it a “masterpiece” of burger-dom.

But the real question, of course, is what my hubby, aka Meat Boy, would think of it. He had been looking forward to sinking his teeth into one ever since we planned our recent Los Angeles trip.

We lucked out on a table at 2:30 p.m. on a Saturday at the new Culver City locale of Father’s Office. It’s located in the very cool looking, refurbished Helms Bakery District. For four decades, the Helms Bakery would deliver fresh-baked bread to your door to as far north as Fresno and as far south as San Diego. Households would place a blue cardboard “H” in their windows as a signal to the delivery coaches to stop so that families could buy bread.

Those days are long gone. But in 1997, the building was named a landmark structure. Now restored, it houses a bevy of modern furniture and design shops, as well as a handful of restaurants.

We ordered the burger; a basket of skinny fries with aioli; a duck pastrami salad with figs; and house-cured Spanish white anchovies in olive oil and sherry vinegar. I don’t think I’ve ever had a more chic salad at a beer bar, and the anchovies were simply divine in their simplicity.

As for the burger? Decidedly worth the hype. The quality of the ingredients was evident from the first bite, and the sweet, soft, gooey tangle of onion confit elevated it to a whole new level. I’m not even a burger fanatic, and I thought it was pretty incredible. As for Meat Boy? Two big, beefy thumbs way up.