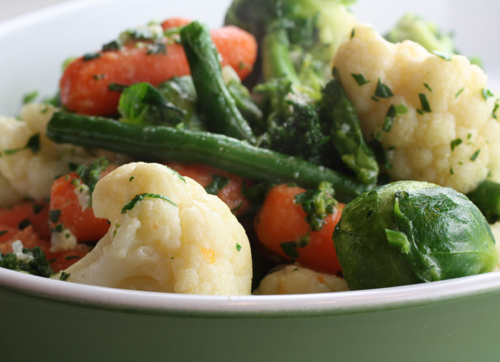 Been there. Done that.

Wake things up by mixing an equal amount of blonde miso into the butter first.

Voila! What you get is a really velvety sauce that clings beautifully to the veggies. The flavor doesn’t scream miso soup. Rather it just lends a subtle umami or savoriness to it all.

The recipe for “Saute of Market Vegetables with Miso Butter” is a cinch to make. Even better, you can vary the vegetables you use, according to what’s in season.

The dish is from the new “The Paley’s Place Cookbook” (Ten Speed Press) by Vitaly Paley and Kimberly Paley, the husband-and-wife team behind one of Portland, Ore.’s most charming restaurants.
A  mix that also included baby carrots, broccoli, cauliflower, and green beans – get blanched first. The miso butter could not have been any easier to make; Just stir together equal parts softened butter and blond miso paste. Everything gets a final warming and mixing in a sauté pan over medium heat.

If you’re expecting the dish to taste very Japanese-like with the bold, salty, savory flavor of miso soup, you’re going to be surprised. The flavor is much more subtle. The miso adds a heightened umami note to the whole dish, and creates a much lusher sauce with more body than mere butter alone would.

But the dish does not scream “Asian” from the get-go. In fact, even though it has miso in it, this vegetable medley could probably be served alongside almost any main dish you like, no matter what the cuisine. I’m already thinking this would be wonderful alongside Thanksgiving turkey.

To make the miso butter, place the butter and miso into a small bowl and mix with a fork until well blended. Cover, and set aside at room temperature.

Have a large bowl of ice water ready. To cook the vegetables, bring a large pot of water to a boil. Season it with salt until you taste it. Add the green beans all at once and cook until tender yet still brightly colored, about 5 minutes. Remove the beans from the water with a slotted spoon and immediately refresh in the ice-water bath to stop the cooking and help the beans retain their bright color. Drain and dry with paper towels, then set aside.

Repeat the process with the broccoli, cauliflower, and green onions. Taste for doneness and be mindful of the cooking time, as it will vary from vegetable to vegetable.

Quarter the green and yellow zucchini lengthwise, then slice into 1/2-inch pieces. In a large skillet over high heat, add the 1/2 cup of olive oil and heat until it shimmers. Add the green and yellow zucchini pieces, season with salt and pepper, and cook, stirring, until they turn golden brown, about 3 to 4 minutes. Remove with a slotted spoon to drain on paper towels. Discard the oil and wipe the pan clean.

In the same skillet over medium heat, warm the remaining 2 tablespoons of olive oil. Add all the vegetables, including the carrots, to the skillet to warm them through, about 5 minutes.

Stir in the miso butter until it melts, and then the persillade. Transfer the vegetables to a large serving platter and serve immediately.

Finely chop the parsley on a cutting board, then gather it to one side of the board. Finely chop the garlic. Mix them together and chop some more until well incorporated. Transfer the mixture to a small container, cover tightly, and refrigerate until ready to use.

From “The Paley’s Place Cookbook” by Vitaly Paley