Apricots — In the Evening (Part 2) 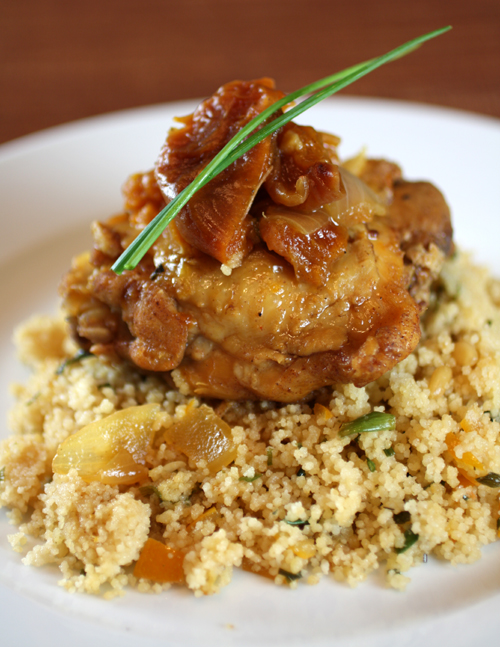 I know a woman who turns up her nose at vegetables in baked goods. Sweet potato pie and pumpkin cheesecake would never touch her lips.

No doubt, she’d push her plate away at fruit tucked into savory dishes, too.

If only she knew what she was missing.

And of course, apricots with chicken.

There’s just something magical about the slightly sweet, softly rounded flavors of fruit in a main dish.

I love to serve it with couscous. Just follow the directions on the box of your favorite brand of quick-cooking couscous. I like to cook it with chicken broth instead of water. Sometimes I’ll throw in a pinch of saffron, or not. After it’s cooked, and has steamed to a fluffy texture, I’ll add half of  a chopped preserved lemon, some minced chives, and a handful of toasted pine nuts. For a more substantial side dish, stir in some canned, rinsed and drained chickpeas, too, if you like.

Together, they make for a most satisfying supper, and one that doesn’t require that fruit secede from your dinner plate.

Rinse chicken and pat dry. In a small bowl, mix together cardamom, cumin, cinnamon, and salt. Sprinkle hafl of the spice mixture over chicken.

coat bottom of a 5- to 7-quart Dutch oven with a thin film of oil and set pot over medium-high heat. When oil shimmers, add enough chicken to cover bottom in 1 layer. Cook, without stirring, utnil chicken lifts easily from pot with tongs and is browned on bottom, about 5 minutes. Turn pieces over and cook until they brown and release easily on the other side, about 5 minutes more. Transfer browned chicken to a plate.

When last batch of chicken has been removed, add onion, garlic, and ginger to pot and cook, stirring for 1 minute until fragrant. Stir in the saffron, cayenne, and remaining spice mixture. Add lime juice and sugar and let come to a boil, stirring to release browned bits. Add broth and return chicken and any accumulated juices to pot. Let liquid come to a boil, then reduce heat, cover, and simmer for 25 minutes. Meanwhile, cut each dried apricot in half.

When chicken has cooked 25 minutes, stir in apricots. Continue to simmer, covered, until chicken is opaque at the bone and apricots are plump, 10 to 15 minutes more. To serve, splash each portion with a few drops of rose water, if using.

From “Braises and Stews”

Yesterday: Apricots — In the Morning (Part 1)