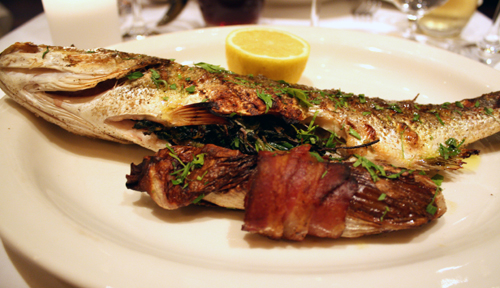 Of all the places I wanted to dine during my recent trip to New York — and believe me, there were many — the one I probably wanted to go to most of all was Mario Batali’s Babbo.

I’ve long admired his exacting techniques and his way of paying hommage to old-country traditions while giving them a fresh, modern interpretation. I also love pasta. Moreover, you have to give it to a man who can get away with a red pony-tail and bright orange clogs.

The first clue that you’re walking into an establishment very much molded into the chef’s image is by what hits your ears. Loud, loud music. It was a lively mix of country and blues the night we were there. The New York Times once famously said it would have annointed Babbo with four stars if not for the pounding music. But Batali wouldn’t have it any other way. The soundtrack is what he wants to listen to. You have to admire that.

Plus, the energetic beat adds a convivial feeling to the restaurant. Amid the striking, huge spray of flowers in the center of the first floor, you’ll find tables of families enjoying a night out with their young kids, as well as couples clad in chic little black dresses and jeans with sports jackets.

The service is top-notch. Knowledgeable to a fault. They make a point to tell you that pasta dishes are entree-sized, and that you can have your whole fish filleted by a server or do it yourself if you wish. Servers can expertly recommend wines to go with your dishes, and tell you exactly why they would marry well with the flavors in the particular dishes you’ve ordered. You gotta like that. 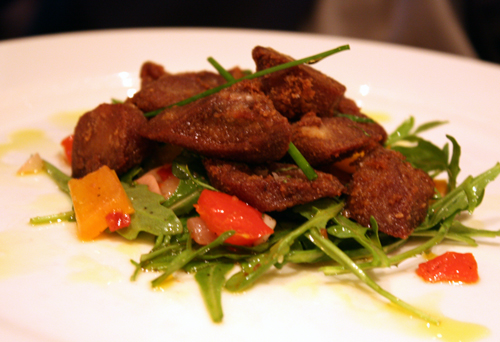 Batali is known for his love of offal, and you’ll find many dishes featuring organs not often found on many other menus. When we heard there was a special of fried goat tongue salad with arugula ($13), we had to get it. We also had to have the lamb’s brain “francobolli” with lemon and sage ($19). And we couldn’t resist the starter of fresh cured sardines with caramelized fennel and lobster oil ($12). 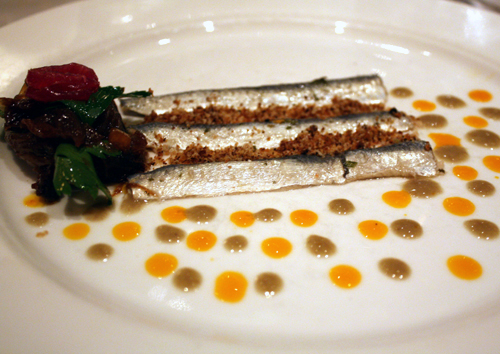 The fried goats tongue were crispy like fried sweetbreads in texture. The taste was a little gamy, almost duck-like. The sardines were velvety, their robust flavor nicely tempered by the licorice taste of the fennel. 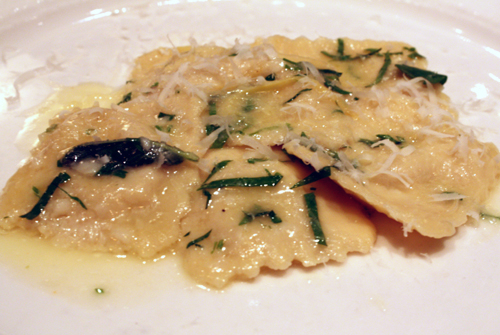 The lamb’s brain pasta? Simply incredible. The filling was soft, and slightly creamy like forcemeat. There was an aged cheesy taste to it. The pasta wrappers were tender as can be. I had split the order with my hubby, but we agreed we each could have easily polished off a full plate. 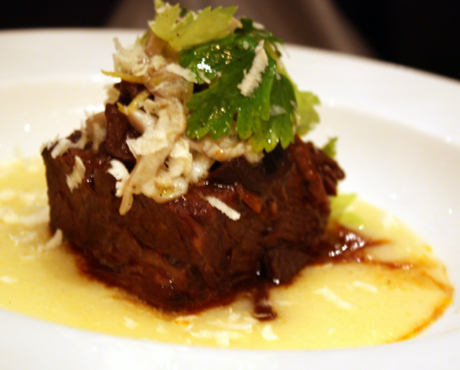 For our secondi, my hubby, aka Meat Boy, opted for braised beef with porcinis and wine ($29), while I went for the whole grilled branzino with lemon oregano jam ($28). The beef was succulent with the earthy flavors of the wine and mushrooms infused throughout. My fish was cooked perfectly, with a smoky edge and moist flesh. 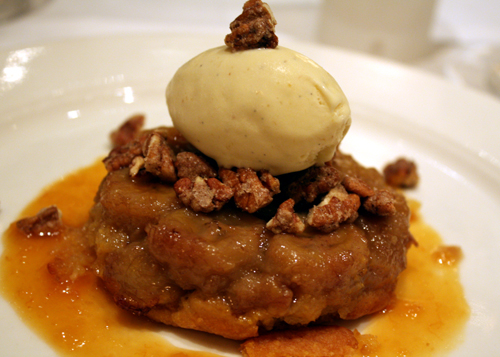 We ended the night with a banana upside-down cake ($12), a twist on a tarte tatin,  that was served with a scoop of banana buttermilk gelato and cardamom-scented pecans. Tiny almond, chocolate, and anise cookies preceded the check. A sweet way to cushion the dent in the wallet, which was not an unreasonable one at all. In these times especially, you have to love that.