Pizzanostra SF Knows How to Slice It When a new pizza joint opens in San Francisco where the pies are made by a guy who placed sixth one year and seventh one year in the World Pizza Championship in Italy, you can’t help but have carb-loving, high hopes for the place.

Pizzanostra SF, which opened in March in San Francisco’s hip Portrero Hill neighborhood, delivers on that.

The executive chef is David Bazirgan, who has worked with celeb chef Todd English, and who has cooked at Baraka, Chez Papa Bistrot, and Chez Papa Resto, all in San Francisco. The pizza maestro is 37-year-old Giovanni Aginolfi, one of Europe’s foremost pizza chefs with 18 years of experience.

Recently, I was invited to try the pizza at this industrial-looking eatery that seats 36 inside and 45 outside when the fog hasn’t rolled in too thickly. 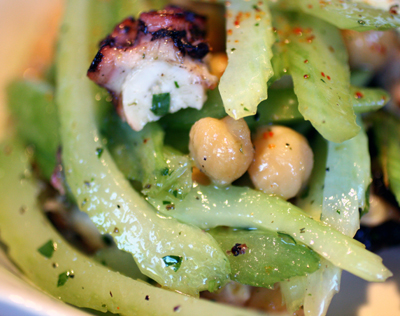 We started with an antipasti of tender, smoky grilled octopus tossed with nutty chickpeas, lemon, and celery ($9). Pizzanostra SF serves a variety of pastas ($9 to $16), and even a grilled burger ($12). But of course, we were there to test the pies.

My hubby, being Meat Boy, opted for the “Cannibal” (tomato, mozzarella, bolognese, oregano, and an egg cooked in the center; $15). Nuggets of seasoned sausage were strewn over the top of the crispy crust. The egg, with its runny yolk, added an extra rich, gooey touch. I had the “Pescatora” (tomato, mozzarella, prawns, clams, calamari, and persillade; $16). The gas-heated pizza oven turns out crusts with very crisp, charred edges. The center sometimes is a little soft, though. But the toppings have a marvelous balance and progression of flavors. Imagine the wonderful garlicky, briney, olive oil-infused sauce on a dish of linguine with fresh clams. That’s the taste that permeates this seafood pizza, which features clams still in the shell to keep them tender. It’s a taste of the sea on a land of crust. The finely chopped persillade, a mix of parsley and garlic, lends a final note of freshness and brightness.

For those not on the Atkins diet, you can end your feast at Pizzanostra SF with even more crust. “Tronchetto Nutella and Banana” ($9) is like a dessert calzone. It arrives on a big plate, cut up and arranged around fresh fruit. Who can resist warm hazelenut-chocolate spread enveloping soft bananas inside a sweet, crisp crust dusted with sugar and cocoa powder? 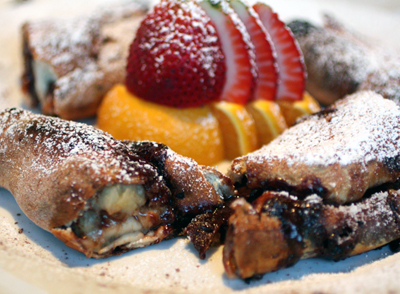 I brought home two slices of leftover pizza, which might have been even better the next day when I warmed them up. For those who don’t know about this fantastic method, the best way to warm up a few slices of cold pizza is definitely not in the microwave, where the crust will turn soft, but in a frying pan on top of the stove. Just place one to two pieces in a frying pan over medium heat. Put a lid on top, and let cook undisturbed for a few minutes until the cheese melts. You’ll end up with nicely warmed slices with crusts that are crisp all the way from the outside in.

We only wished they delivered to our neighborhood, some 50 miles away.