As a long-time food writer, I’ve found myself in some enviable positions over the years.

One of my fondest memories is the time a few years ago when I was invited to Chef Gerald Hirigoyen’s Marin County house for lunch. It was a gathering of just three other food writers. We all hung out in the kitchen as the charming Basque chef cooked us lunch in honor of his friend’s new cookbook.

Oh, the friend in question? That would be New York four-star Chef Eric Ripert of Le Bernardin. And the other cooks in the kitchen that afternoon? Laurent Gras, who went on to open his acclaimed L2O in Chicago; and Laurent Manrique, chef-partner of the Aqua Restaurant Group in San Francisco.

It’s hard not to feel a little star-struck in that company, especially when Ripert hands you a warm croque monsieur (done his way with salmon instead of ham) that he just made in a frying pan at the stove. But as we all sat down at the kitchen table to eat, chit-chat, and share laughs, it was as comfortable as any gathering of old friends could be. 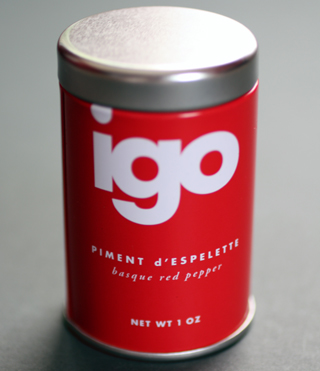 Therein lies the beauty of Hirigoyen’s hospitality and cooking that permeates his San Francisco restaurants, Piperade and Bocadillos. Both are infused with warmth and soul throughout.

His new cookbook is no exception. “Pintxos: Small Plates in the Basque Tradition” (Ten Speed Press) by Hirigoyen and co-author Lisa Weiss is filled with recipes for small plates that pack a lot of gusto. They are mostly Basque-inspired, but a few also feature the Cal-Asian flavors Hirigoyen has grown to love. Pintxos (the Basque version of Spanish tapas) make for perfect, casual party food.

Many of the recipes call for piment d’Espelette, a dried red chile powder from the Basque French region. The chiles, grown only in and around the town of Espelette, have a smoky, complex flavor and a subtle kick. Hirigoyen imports his own that’s sold under the Igo Foods brand. I picked up a 1-ounce container ($16) at the Spanish Table in Berkeley. I decided to try making his “Chicken Thighs with Spicy Basque ‘Ketchup’.” You make a piperade first (a stew of sweet peppers and onions) that gets pureed in a blender and seasoned with more piment d’Espelette.

The chicken thighs are simmered in the sauce until done. It couldn’t be easier. As for the taste? Let’s just say that my husband and I now want to spoon this sauce over everything and anything. It’s tangy, sweet, a little spicy. It’s ketchup with new-found personality, and yes, heaps of soulfulness.

Sprinkle the chicken on all sides with salt and pepper. Heat a sauté pan over high heat until hot. Add the olive oil and warm it until it ripples. Add the chicken, skin side down, and cook for 3 to 4 minutes, or until the skin is golden brown. Using tongs, turn and cook on the second side for 3 minutes, or until lightly browned. Transfer the chicken to a plate and discard the oil.

Return the pan to high heat and add the brown sugar, whisking until it melts. Remove from the heat and whisk in the sherry vinegar. Return the pan to medium heat and whisk the mixture for about 1 minute, or until it has thickened and reduced. Stir in the pipérade and the piment d’Espelette. Return the chicken to the pan, cover, decrease the heat to low, and cook for 10 minutes, or until the thighs are cooked through.

Transfer the chicken, skin side up, to a broiler pan and broil for about 2 minutes, or until the skin is crisp.
To serve, spoon a pool of the sauce on each warmed plate and top with a chicken thigh. Sprinkle with the parsley.

To Drink: The Navarre region is in north-central Spain, and its food is strongly influenced by the Basque Country, which borders it. Most of the grapes grown there are Garnacha, and though it was long thought of as the region of rosadas, or rosés, its reds are gaining in popularity. A spry, light, fruity Navarre red, served slightly chilled, is ideal here.

Heat a large sauté pan over medium-high until hot. Add the olive oil and warm it until it ripples. Add the onion, bell peppers, garlic, and tomatoes and cook, stirring occasionally, for about 10 minutes, or until the vegetables have softened and have begun to color. Remove from the heat and let cool.

Season to taste with salt and piment d’Espelette before using, and then use immediately, or store in a tightly covered container in the refrigerator for up to 5 days.

From “Pintxos: Small Plates in the Basque Tradition” by Gerald Hirigoyen