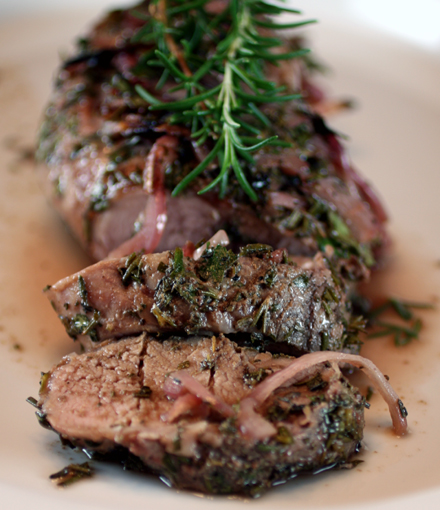 I love all things Spanish.

When I spied the new “One Pot Spanish” (Sellers Publishing) cookbook by Spanish cooking authority Penelope Casas, it brought back delectable memories of my trip to Spain long ago, when I got my fill of seafood paella, briny olives, and bracing gazpacho.

Casas’ newest cookbook is filled with dishes easily made at home, including marinated chickpeas with capers and red pepper; lentil soup Madrid-style; and grilled fish with anchovy-caper sauce.

I was enticed by “Solomillo De Cerdo En Jarabe De Granada” (Pork Tenderloin in Pomegranate Syrup). The dish is characteristic of Andalucia’s Moorish heritage with its sweet and savory flavors.

Pomegranate juice is reduced in a saucepan. When it has cooled, the juice is mixed with white wine, rosemary, thyme, parsley, and bay leaves to form a marinade for pork tenderloins. The pork is then roasted in the oven, with its marinade becoming a flavorful sauce for the meat.

The pork emerged from the oven extremely tender. The herbs added complexity to the dish. But I was disappointed that the pomegranate flavor wasn’t more pronounced, and the thin sauce not nearly as syrupy as I thought it would be.

If I made the pork dish again, I might increase the amount of pomegranate juice to be reduced, and maybe stir in a little honey to give the resulting sauce more body.

2 pork tenderloins, about ¾ to 1 pound each

Chicken broth or water as needed

Put the pomegranate juice in a small saucepan and boil over high heat until juice has reduced by half. Remove from the heat and let cool completely.

In a deep bowl large enough to hold the tenderloins, stir together the pomegranate juice, onion, wine, oil, parsley, rosemary, thyme, bay leaves and salt and pepper to taste. Add the tenderloins, turning to coat with the marinade. Cover and refrigerate for 2 hours, turning tenderloins occasionally.

Preheat the oven to 375 degrees. Remove the tenderloins from the marinade and put in a shallow roasting pan.  Scatter the onion from the marinade around them and add just enough of the marinade to moisten the pan, reserving the remainder. Roast the tenderloins, uncovered, for 30-40 minutes, until a meat thermometer registers 145 degrees, adding more marinade occasionally to keep the pan juices from burning.  By the time the meat is done, you should have added all the marinade, if more liquid is needed, add a little chicken broth or water.

Transfer the tenderloins to a cutting board, tent loosely with foil and let rest for 10 minutes. Cut the tenderloins at an angle into ½-inch slices and arrange on a platter. Drizzle with the juices from the roasting pan.

From “One Pot Spanish” by Penelope Casas