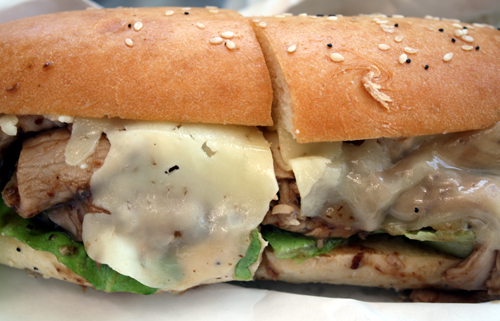 Last week, I finally got around to eating at a revered place in San Francisco I’ve been dying to try.

It’s owned and operated by a most esteemed chef. It garnered a glowing, three-star review in San Francisco Magazine. Oh, and it’s tinier than many people’s walk-in closets.

It is, of course, The Sentinel, the doll-sized, corner sandwich shop South of Market opened a year ago by Dennis Leary, a most talented chef who makes no bones for marching to his own beat.

Long before it became uber hip for high-end chefs to chuck it all to careen around town in blinged -out, gourmet taco trucks, Leary left behind the highly regarded Rubicon restaurant, where he was its highly regarded executive chef, to open a glorified diner named Canteen.

Ah, but the 20-seat Canteen is no dive. It’s a cozy, lively joint decorated with shelves of classic books, a nod to Leary’s Phi Beta Kappa degree in English literature from Wheaton College. With room for only two or three other helpers behind the counter while he cooks, Leary miraculously turns out prix-fixe and a la carte dinners that are nothing short of magical. His Parker House rolls are reason alone to go. As is the warm vanilla souffle that never leaves the menu.

Before heading to Canteen to cook each night, he mans The Sentinel at breakfast and lunch each weekday. I’m sure I’m not the only one wondering if the guy ever sleeps.

I did try snapping a few photos of Leary, who was behind the counter at The Sentinel the afternoon I visited. But the red-headed chef is a whirlwind as he assembles sandwich orders lickety-split, making for some god awful blurry images I didn’t want to inflict on you. 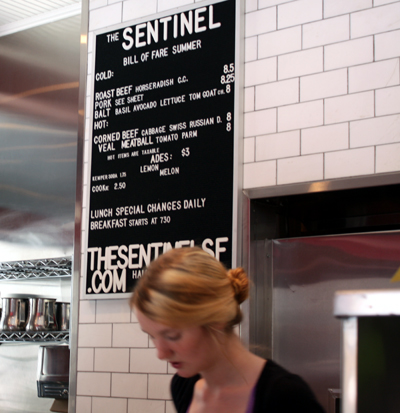 The small menu at The Sentinel changes daily. Usually, there are a couple of cold sandwiches, a couple of hot ones, a soup, and one “Daily Special” that comes complete with a side and dessert.

There are two doorways leading into this bustling, take-out cafe that has no seats and really no room at all to linger.

You get in line at the entrance on Stevenson Street. And yes, at lunch-time, there’s usually quite a line. A piece of paper printed with that day’s menu is near the entrance for your perusal. 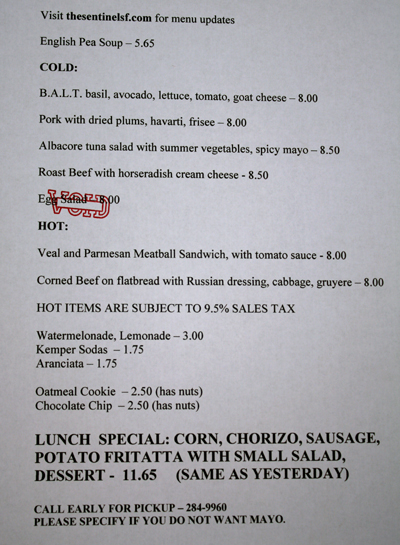 Just as you’ve barely set a big toe inside the entrance, a young woman will peek her head out to take your order. Before you’ve even finished saying, “I’ll have the pork sandwich, a watermelonade, and an oatmeal cookie,” she’s already handed you the cookie in a paper bag. The second you get to the cashier, a mere step and a half farther into the cafe, you’re handed your beverage, and asked your name, which will be called when your order is ready.

The distance from that Stevenson Street entrance to the New Montgomery St. doorway exit is barely six steps. This former smoke-shop space is so small that you’re in, then out, before it practically registers in your brain.

Yet in this bite-size place, Leary and one other cook manage to craft simple sandwiches and salads with real panache. The ingredients are top-notch. It’s a sandwich that hasn’t been slapped together, but has had real thought put into it — from the carefully wrapped pickle spear that goes into each brown paper bag to the Andes chocolate mint that gets tucked inside, too.

Grab your order, then enjoy your food al fresco on a nearby bench or in one of the surreptious atriums set up with chairs and tables hiding in some of the surrounding office buildings.

My pork loin with dried plums, frisee and Havarti cheese ($8) came warm and gooey on a soft, torpedo-shaped roll. It was messy — but in a good way, with the melty cheese blanketing the thin slices of pork almost like a Philly cheesesteak. The chopped dried plums added a wonderful sweet note. 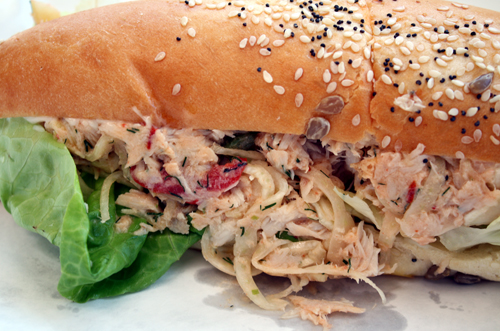 My friend’s albacore tuna salad sandwich ($8.50) with thin slivers of fennel, all mixed with chipotle mayo made for what we both declared one of the best tuna sandwiches we’d ever sunk our teeth into. 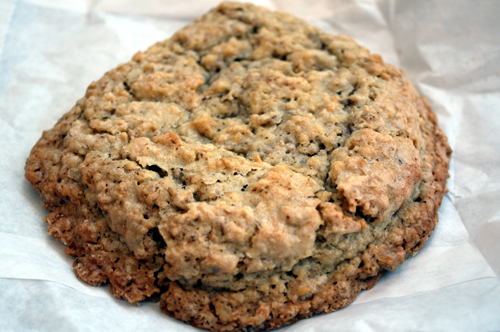 The watermelonade ($3) was refreshing and thankfully not overloaded with sugary sweetness. The oatmeal cookie ($2.50) was beyond enormous. Although it may have been a bit under-baked in the center, it proved a buttery, satisfying ending.

I can’t wait to return to this miniscule spot that’s the wondrous epitome of true In ‘N’ Out.