Kick Off Your Heels At Martins West Pub 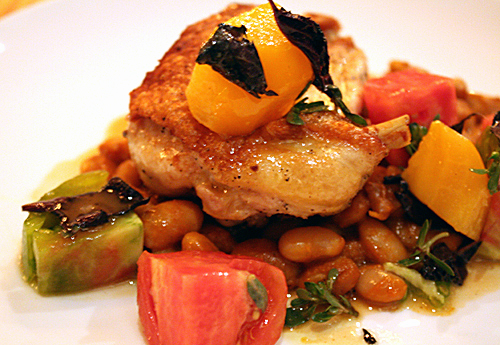 Cowboy boots would be right at home at the new Martins West Pub in Redwood City.

Sure, it’s a gastropub with a British sensibility to the food, but there’s a down-home, kick-off -your-heels look and feel to it, as if you’re stepping foot inside a modern version of an old Western saloon. And that makes sense when you know the history of the Alhambra building that houses it.

The 1896 historic building started out as a theater and — yup — saloon. Over the decades, one of its most famous patrons was none other than Wyatt Earp, who’d visit regularly to watch his wife, Josie sing from the rafters.

You can almost picture Earp in this rustic space that’s been born anew. The dining tables are unadorned wood. Exposed brick walls and iron chandeliers give a timeworn vibe. Water is brought to the tables in milk bottles, and the napkins are soft, cotton dishtowels.

The dining-room is moody dim. So much so that when you’re seated, the hostess will hand you a key-chain flashlight with your menu, so you can actually read it. You get to keep the key-chain, too, which has the restaurant’s logo on it. Consider it a modern-day version of the matchbook of yore.

Executive Chef Michael Dotson, formerly executive chef of PlumpJack Cafe in Squaw Valley, executive chef at Evvia Estiatorio in Palo Alto, and executive chef at Sens restaurant in San Francisco, has crafted a menu of small plates and mains, as well as pub snacks such as Scottish eggs, and a seasonal pastie.

If you’re a California cuisine-type who is all about crisp, fresh veggies, this might not be the place for you, as you’ll only find that criteria met in the Little Gem salad ($9). Otherwise, as is the traditional British way, you’ll find your veggies pickled, pureed in a mash, or fried, which is not necessarily a detriment if you’re in the right mood.

There’s a list of specialty cocktails as befits this historic saloon. I sipped a thoroughly enjoyable and refreshing Pimm’s Cup ($9), garnished with bright green shavings of cucumber skin. 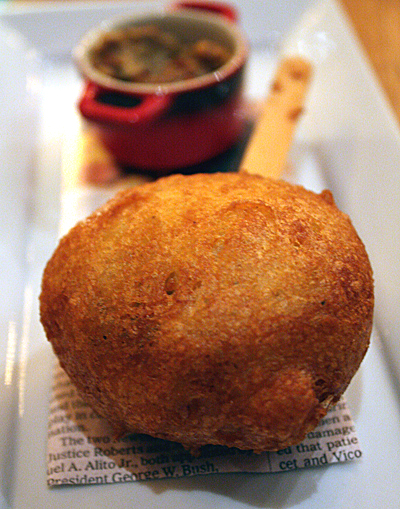 My husband and I, who were invited to come for dinner, couldn’t pass up ordering the “haggis on a stick” ($4). Neither of us has had tasted haggis before. Let’s face it — you don’t often find the traditional Scottish and British sausage-like concoction — a mix of sheep organs cooked inside the animal’s stomach — on too many menus around here. And at Martins West Pub, it’s reinterpreted as a newfangled version of a corndog on a stick.

If you’ve had scrapple or livermush in the South, you’ll recognize the flavor of the haggis on a stick. It was soft, almost pudding-like in texture, and with the pronounced metallic taste of liver. The accompanying pot of grainy mustard helps cut the animalistic aftertaste. I can’t say I loved it. But I can say that I have now tried it once. More to my liking was the “Spiced Pork Belly” ($10), which was fatty, and decadent. Slices sat atop croutons of bacon-scallion soda bread that tended to get a little sodden like Thanksgiving stuffing if you didn’t eat them quickly. Sweet slices of Honey Crisp peaches cut the richness of the pork.

“Pheasant and Leek Bangers” ($15) came two to an order, atop a green, creamy mash of broadbeans that tasted a little like pesto, and was garnished with crispy, golden rings of leeks. The sausages were juicy and mild. 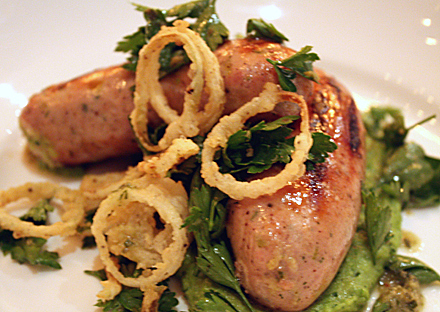 The “Rhode Island Red Chicken Breast” ($17) was nicely done with moist, well-seasoned flesh, and with crispy skin. It sat on a pool of comforting British baked beans, and cubes of heirloom tomatoes to lend brightness.

Of course, I had to save room for dessert. After all, Pastry Chef Kelly Fields, already has a great reputation, having worked at the highly regarded Restaurant August in New Orleans before she was promoted to pastry chef consultant for the entire John Besch Restaurant Group. Three, one-bite, tear-dropped shaped beignets arrive crispy and warm, holding a gooey, liquidy filling of milk chocolate custard. Also on the plate, a brick of milk chocolate nougat sprinkled with chopped almonds and just the perfect amount of sea salt. Yes, it all does taste like a Mars Bar, but oh so much better.

I’m not sure I’d come back for the haggis. But I definitely would for the beignets. They made for a perfect ending to a most interesting pub crawl.