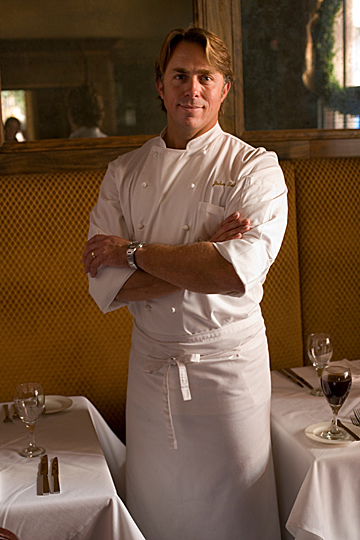 To know and understand New Orleans Chef John Besh, all you need do is read this most telling description of him that was written two years after Hurricane Katrina laid waste to the cherished city that he has called home most of his life.

In the New York Times then, my friend and colleague, Kim Severson, summed up Besh as the “ex-Marine who rode into the flooded city with a gun, a boat and a bag of beans and fed New Orleans until it could feed itself.”

Four years after Katrina rained untold devastation upon his beloved New Orleans, Besh is still its savior. Wherever he travels, the 41-year-old chef, who exudes an irresistible Southern warmth that makes strangers feel they’ve known him all their life, can’t help but be a cheerleader for New Orleans’ past, present, and future.

When Katrina hit, Besh had just bought out his investor in his flagship Restaurant August in New Orleans. He was up to his toque in debt, and feared he would lose everything.

Like the city itself, though, he persevered, excavating himself from that murky uncertainty to a place of hope and possibility.

Now, he is poised to open his sixth restaurant in Louisiana. He’s also written a new cookbook, “My New Orleans: The Cookbook” (Andrews McMeel). A portion of the proceeds from the sale of the book will be donated to Café Reconcile, a New Orleans non-profit dedicated to providing at-risk youth the skills needed to enter the hospitality and restaurant industries.

You can meet Besh this week, when he’ll be in the Bay Area to sign copies of his book. He’ll appear at a free event at Omnivore Books in San Francisco, 6 p.m. to 7 p.m. Oct. 14. He’ll do a cooking demo, noon to 1 p.m. Oct. 15 at the Ferry Building in San Francisco, which will be followed by a dinner event that night at Left Bank restaurant in Larkspur at 6 p.m.

I had a chance to chat with him by phone last week about the past few tumultuous, yet ultimately rejuvenating years.

Q: Your new cookbook is almost a love story about New Orleans. What compelled you to write this book in this way?

A: The last thing I wanted to do was create another chef-y cookbook. In this day and age, we’re so caught up in fancy restaurants. But the most important thing is that everyone comes from somewhere and everyone has a story. And this is my somewhere and my story.

When you understand the story and where the food comes from, you can cook it with more authenticity and soul. If we’re not careful, we will lose the last little places that have their own true cuisine. I felt that especially after Katrina, when Republicans let us down, when politicians all over let us down, and we were just left on our own. It prompted me to think more about the validity of these great traditions. New Orleans is a city of good values. It values people, it values good times, and it values tradition. 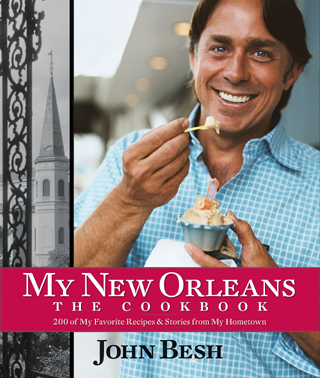 Q: You evacuated the city, then came back right after Katrina hit?

A: My family evacuated. I have a wife whom every man would dream of having. She’s smart, strong, and takes care of the family, which allowed me to be relatively independent.

They left two days before Katrina hit, and went to North Carolina. I was here, helping to get my father out of town. He’s up in age and paralyzed (after being hit by a drunk driver 32 years ago). After we made sure our employees were taken care of, it was just myself and my partner in Dominica restaurant, who came back into the city a few days later.

Q: Did your Marines training come in handy for what awaited you in New Orleans?

A: Nobody is trained for everything. Life is all about perspective. The one with the best perspective comes out on top. And I had a good perspective. Having experienced combat, I’ve seen chaos before. My former Marine connections helped. They were able to get me gasoline and beans when I needed them.

Q: I don’t think anyone will ever forget those searing images on TV. What was it like actually being there?

A: It was ‘Oh my god, this is happening in America.’ It felt like we were the last car out of the city on the day the hurricane hit. I remember seeing kids playing outside, and thinking, ‘Don’t they know?’ or “Can they help themselves?’

I wondered if that person made it or died or where they went. To see families separated on buses, and knowing my family was home and safe, it was hard to ponder.

Q: Did you think all was lost, not only for your future, but that of the city?

A: I was bankrupt. I resigned myself that if this was how it was going to be, I’d just do what I could. I wasn’t thinking of turning the business around. We just lost the entire city – our entire business base. I was paying $55,000 a month in rent — New York or San Francisco prices. I thought, ‘I’ll just cook and we’ll see what happens and trust that God has it under control.’ There’s no atheist in a fox hole. When the chips are down, you start believing in God real fast. You realize that government sure isn’t the answer in times like that.

Q: How did the aftermath of Katrina change you personally and professionally?

A: It really changed and really solidified my thinking of everyday life. I thought about my food, and what kind of impact was I making. There were farmers starving and oyster men who needed to sell oysters. I thought that if I’m spending money on food, why don’t I spend it in my own backyard.

I realized that we’re going to weather this storm and we’re going to turn this city around, that it’s going to be better than before. If it weren’t for Katrina, I’m not sure we’d have the same level of consciousness. We’d just be preparing for the next party. (laughs) We’re still doing that but with more of a perspective that we need to take care of this treasure that we have. I love America, but it has become so homogenized, so corporate. New Orleans is its own little town. It’s got its own personality and quirky ways. We can’t take it for granted. It’s a special place.

Q: Did you ever think you’d have this many restaurants?

A: I thought that if I could just be the chef for Ella Brennan (matriarch of legendary Commander’s Palace) that would make me happy. I kept a diary during the Gulf War. I thought about what I would do afterward. I thought if I could work for the Brennan family or Emeril (Lagasse), I’d be pretty happy. I didn’t come from money. To swing million-dollar deals was something I never thought about and never thought could happen.

To have six places now, I just scratch my head and wonder how did this happen? The storm did bring about an esprit de corps of like-minded people working together and experiencing the burden of what Katrina brought. We have just kept getting stronger and stronger. If it weren’t for the storm, this wouldn’t have happened either.

Q: You didn’t win when you competed on the first season of “The Next Iron Chef.” How did you end up doing that show?

A: My joke with Michael Symon (the Cleveland chef who won) was that I had the Southern accent and that just wasn’t in the cards. (laughs)

I was actually on “Iron Chef America” first. It was scheduled way before the storm, and we filmed it just a short time after Katrina. I took the whole staff to New York, and we lived like there was no tomorrow. We had a great time, and beat Mario Batali in “Battle Andouille Sausage.”

I did the “Next Iron Chef” only because if I didn’t bring attention to my city, and to my group, well, shame on me. Everyone had something at stake in the restaurant. We had families living in the restaurant. And friends of co-workers living there. I hated the fact of being in front of the camera while so many people were suffering. But shame on me if I didn’t promote the hell out of what we were doing to try to turn things around.

Q: I know it’s hard to generalize, but do people in New Orleans feel hopeful now? Or do they feel abandoned and forgotten?

A: There are still people who aren’t home yet. After you’ve lost everything you own, everything is not hunky-dory. But we have great people moving in and moving back in. We’re making great strides in rebuilding smarter.

Q: How would your life have been different had Katrina not happened?

A: I can’t even imagine. It’s been so surreal.

Q: What’s the one thing you most want people to know about New Orleans today?

A: It’s one of the most unique cities in the country with its own set of rules and its own style, and it’s ready to entertain you. So many people still think it’s underwater or torn up. But in fact, it’s a city that’s thriving, and a city that really celebrates hospitality.

Q: Since you lived through a modern-day apocalypse, I have to ask — what would your last meal be?

A: My grandmother’s cracklins corn bread, and BLTs with pot liquor (the juices from cooking ham hocks). That is my same meal as when I was five. I guess I haven’t evolved much. I’d just gobble it all up. 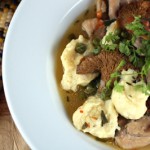 Tomorrow: The recipe for John Besh’s “Chanterelles, Chicken, and Dumplings.”