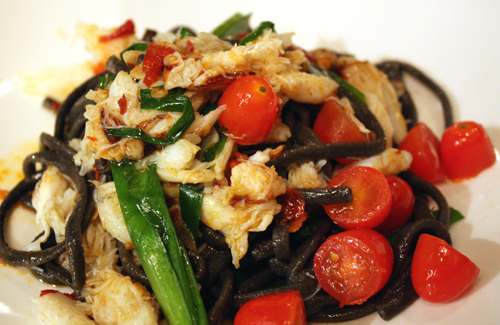 Before you scratch your head too much, that would be SPQR, the popular Italian restaurant in San Francisco, whose name stands for Senatus Populesque Romanus or “The Senate and People of Rome.”

And PDG, my play on acronyms, would be “Pretty Darn Good,” as in what I thought of the restaurant when I was invited to dine earlier this month.

Executive Chef Matthew Accarrino, who just took over the helm there, had a hard act to follow. After all, he was succeeding the one and only Chef Nate Appleman, whose popularity and way with food had foodies nearly weeping when he departed for New York this summer after winning the James Beard “Rising Star Chef” award. Appleman’s new Manhattan pizzeria is set to open any day now.

Bay Area gourmets needn’t have worried, though. Accarrino boasts quite the lineage, too — having graduated from the Culinary Institute of America in Hyde Park, apprenticing in Italy, and working with the likes of celeb chefs Charlie Palmer, Todd English and Rick Moonen. That was followed by a stint as opening sous chef at Per Se in New York, then off to work at Tom Colicchio’s New York empire of Craft, Craftsteak, and Craftbar. Most recently, he was chef de cuisine at Craft Los Angeles.

On a blustery evening, nearly every table was occupied in the warm, wood-accented narrow dining room. Patrons seem to have embraced the new menu, which is more refined than the rustic dishes of the past.

Accarrino makes his own ricotta daily from milk and buttermilk, and the creamy, spoonable fresh cheese shines in quite a few dishes. 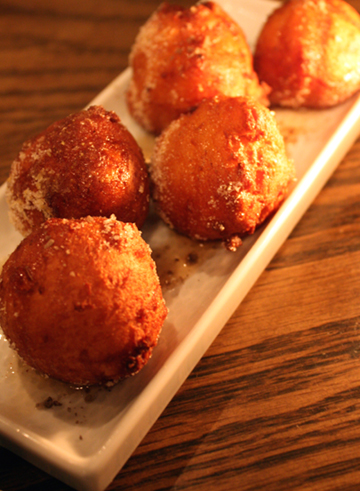 We started off with one of them — spiced ricotta fritters with smoked maple syrup ($7). These were like little donut holes — tender and fluffy on the inside, crispy on the outside, with just a little sea salt over the top. They would make a most excellent brunch nibble. 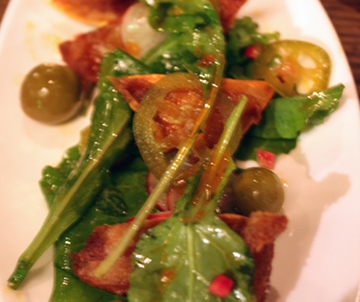 Next, we had the crispy pig’s ear ($8), well, just because it was on the menu. I’ve only had pig’s ear served Chinese-style before — basically, boiled and chopped into little, crunchy pieces. This was quite a different rendition. The texture of the triangular pieces was crispy, then almost gelatinous on the inside — like cracklings with molten fatty goodness.  Served with pickled jalapeno slice and radishes, these would be great with cocktails. But then, what fried food isn’t? 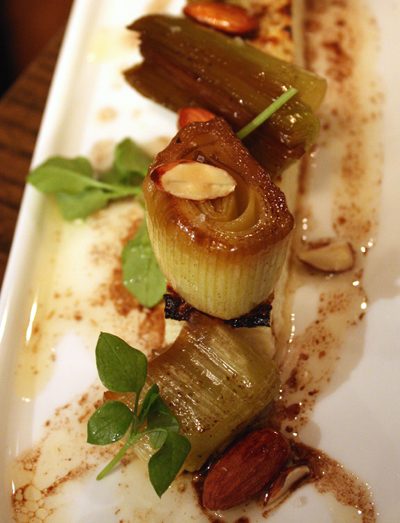 SPQR makes all its own pasta and it shows.

The cappelletti ($16) are little pillows of sweet kiri squash and prune, accented by almonds, brown butter, and crumbs from spiced bread made in-house. You can smell the cinnamon as the dish is set down. The tender, filled pasta is autumn personified. 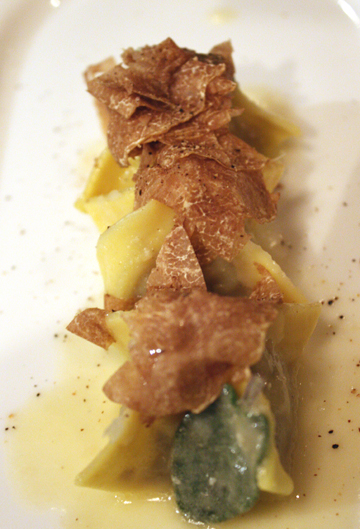 Perhaps my favorite dish was the spaghetti nero ($17) — strands of pasta stained black from squid ink. Its color was a contrast to the chunks of white Dungeness crab, tiny red tomatoes, and green garlic chives. Chili oil gave it a kick, giving the dish sweet, spicy and subtle metallic flavors. We ate every bit.

Meaty, tender beef cheeks braised in red wine filled pasta pyramids ($15) that got a touch of horseradish and a nice shaving of white truffles. Earthy and pungent, it’s a winter dish you can’t wait to cozy up to. Nuggets of skate cheeks were crispy and sea-sweet against bitter red mustard greens ($17). This dish was the only misstep of the night, suffering from too much salt and lemon. 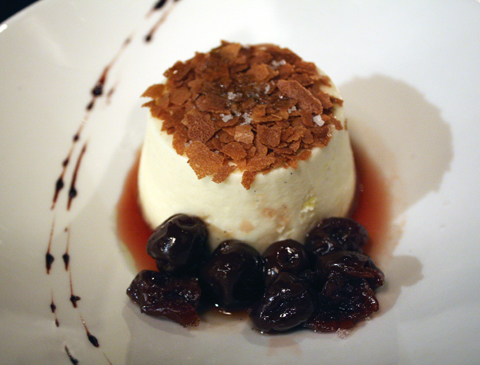 Dessert followed with another showing by our friend, ricotta — this time as a bavarese ($8), a thick custard with lovely sour cherries and tangy verjus. 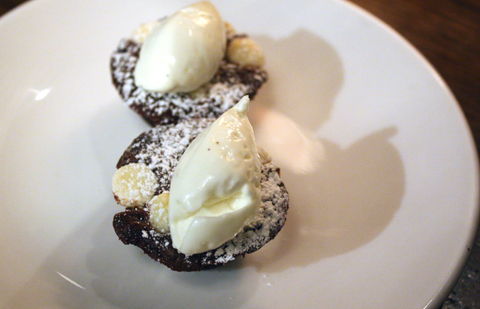 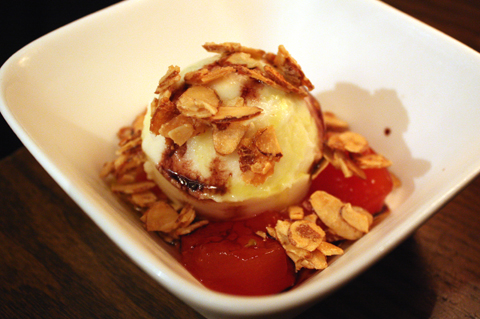 Chocolate baci topped with luscious mascarpone ($5) were like little brownie cakes. And even though it was chilly outside, we couldn’t resist the rich olive oil gelato crowned with persimmons, addicting candied almonds and saba (an Italian syrup made from the unfermented residue of crushed grapes).