The Art of Hoshigaki 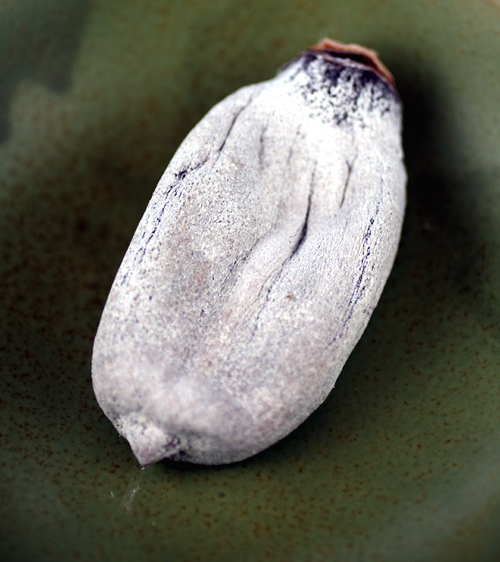 He also has a thing for massaging fruit.

Before you raise your eyebrows too high at that, just know that it involves the ancient and quite labor-intensive Japanese tradition of preserving persimmons. 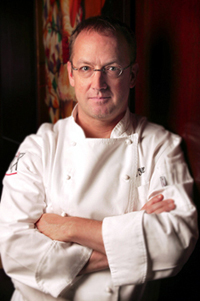 Hill has been making the dried persimmons, known as hoshigaki, for the past four years, ever since he was inspired to give it a try by the lovely sight of all the bright orange persimmons at his local farmers market.

He doesn’t use the hoshigaki at his restaurants or sell them. He just makes them for fun to give to family and friends. And when he asked me if I would like to try some, I jumped at the chance.

Hill employs the traditional method of making them, which requires that the persimmons be peeled by hand, then hung by string for several weeks. During that time, he gives them regular massages to help break up the flesh and to help maintain their uniform shape. The rub-downs also help smooth the exterior to retard mold. After about six weeks of this pampering, a white powdery bloom naturally appears on the fruit, signaling that they’re ready to be enjoyed. 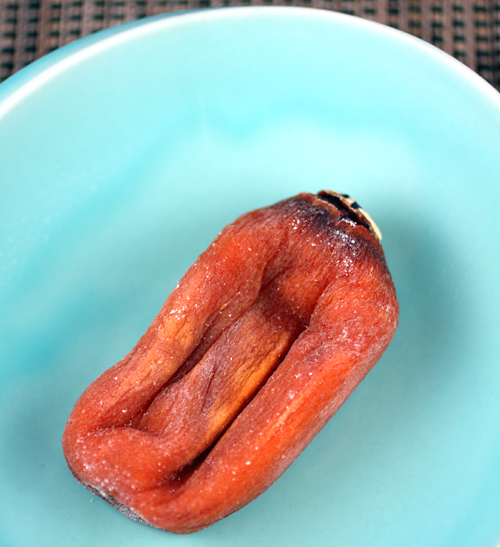 He sent me two kinds of hoshigaki, each made of the Hachiya variety of persimmon, so that I could get an idea of the transformation process.

The first hoshigaki, from Blossom Bluff Orchards, were the hue of yam puree. Still vivid orange, they had been started just three weeks ago. The second, made from persimmons from Hamada Farms, had the characteristic frosted look, having been started more than two weeks prior to the other batch.

The difference in appearance was indeed striking. So were the textures. The orange ones were moister and plumper; the white ones were denser and meatier. The flavors of each were similar — almost sweet potato-like with a subtle floral quality and a hint of warm baking spices.

If you’d like to try a taste of hoshigaki, you can find them at this time of year at Japanese markets, such as Nijiya. With all the labor involved, they don’t come cheap. Expect to pay about a dollar for each one.

Hill’s hoshigaki were huge in size compared to the ones I’ve seen in stores. They were beautiful to behold. What a treat to enjoy an unforgettable gift made with such care and passion. 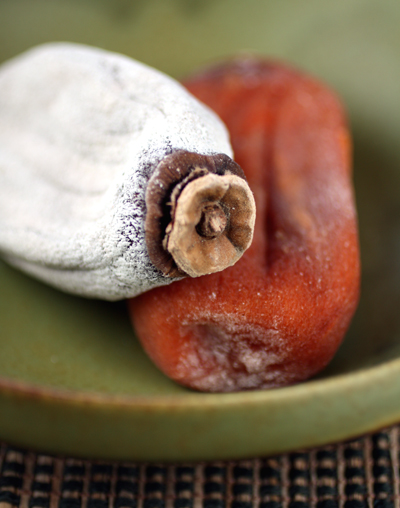