If an apple a day keeps the doctor away, then an apple muffin a day surely must keep nobody away.

Not when it’s full of tender, juicy diced apples, toasty cinnamon and lovely, caramelized brown sugar that’s sure to prompt a near stampede its way.

When a couple of new apples arrived as a sample in the mail, I immediately got the craving for muffins. What can I say? That’s just how I am.

The apples were Pinatas. No, they weren’t full of candy when you cut into them. Indeed, they’re an heirloom varietal that’s available throughout the United States this year for the first time. 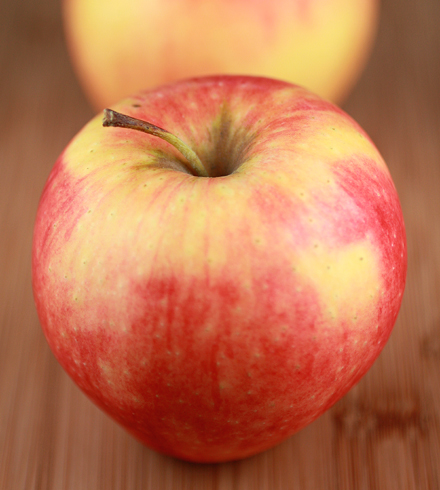 Family-owned Stemilt Growers of Washington state now grow this boutique apple that originated in Germany. The Pinata is crisp and juicy. It has a sweet, mild taste without any sharp tang. It doesn’t brown much after being cut, and it’s ideal for eating out of hand or for baking.

Look for them at Bay Area Raley’s and Safeway stores for about 99 cents to $2.49 a pound.

After looking over a few muffin recipes, I decided to make up my own, using ideas I liked from a few different ones.

I wanted an apple muffin full of apples and nuts. So into the batter went two apples and 1/3 cup of toasted walnuts. Since I didn’t have milk or buttermilk on hand, I used Greek yogurt for moistness and a subtle tang. Since I still have a half full bottle of Calvados in the house, I added a little of that, too, just for fun. But you can easily leave it out if you so want.

For the top, I wanted a little sweetness, but not the usual, thick layer of sugary streusel. I’ve baked muffins before, where after they cooled, I’ve dipped the tops in butter, then rolled them into cinnamon-sugar. This time, I tried sprinkling on a little cinnamon-brown sugar before baking. The mixture bakes into the muffin and creates a very pleasing thin, crackly, caramelized top.

When they emerged from the oven smelling like apple pie in muffin form, my husband waltzed into the kitchen, eager to try one.

After all, these muffins are a surefire way to keep nobody away. 1/2 teaspoon plus a pinch of salt

Whisk together sugar, flour, baking soda, salt, cinnamon and nutmeg in a medium bowl. Add diced apples and walnuts, tossing to coat. Whisk together eggs, yogurt, butter and Calvados (if using) in a small bowl. Gently fold the liquid mixture into the flour mixture until just combined. Don’t overmix or muffins will be tough. Divide batter among muffin cups.

In a small bowl, mix brown sugar with cinnamon. Sprinkle a little of the mixture over the top of each muffin.

Bake until muffins are brown around edges and spring back when touched, 16 to 18 minutes. Remove muffin pan to a rack to cool for about 5 minutes. Then, turn out muffins onto the wire rack. Serve warm or at room temperature. Store muffins in an airtight container at room temperature for up to 2 days. Or freeze in a plastic container for longer storage. 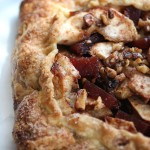 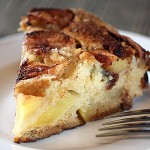 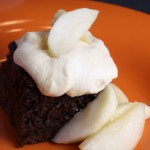 And Another: Gingerbread with Warm Apples and Cider Sabayon