A Simple Stir-Fry with Big Bang 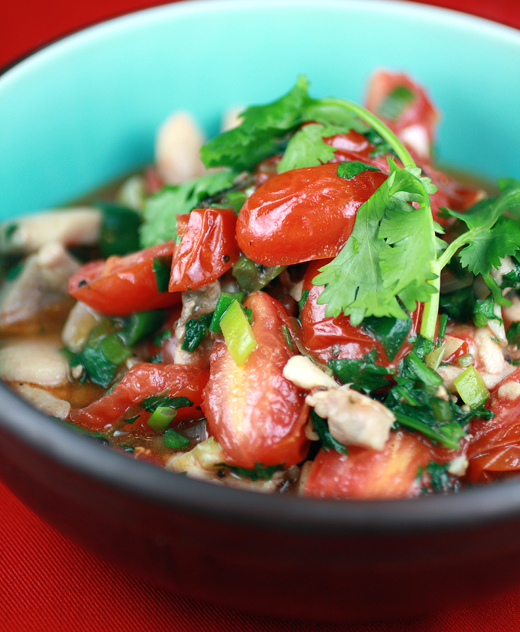 You’ve all probably had this experience: You spy a dress or jacket on a rack that doesn’t really look all that special. But you tote it to the dressing room, just for the heck of it, without any real expectations.

There, you slip it on, and it reveals itself to be not only flattering, but downright transformative.

This recipe for “Stir Fried Chicken with Tomatoes” is like that piece of clothing. It’s a simple stir-fry that doesn’t look like much on the page. In fact, it’s one of those recipes that you’re likely to just flip right over in a cookbook.

But what a mistake that would be.

This recipe comes from “Cooking from the Heart, the Hmong Kitchen in America” (University of Minnesota Press) by Sami Scripter and Sheng Yang. It’s filled with both traditional and more contemporary dishes made by the Hmong who settled in the United States after the Vietnam War from Vietnam, Laos, Thailand and Burma. Assembling the cookbook was no easy task. The Hmong typically don’t write down recipes. Indeed, their form of communication was primarily oral rather than written until as late as the end of the 19th century.

I’m not sure what first attracted me to this recipe, which is an example of the type of cooking younger Hmong do these days. Maybe it was because it was simple enough to do on a busy weeknight. Or that it didn’t call for any exotic ingredients. Whatever it was, I admit that I approached it with low expectations.

You take bite-sized pieces of skinless, boneless chicken (it calls for breasts, but I used thighs), and stir-fry with cherry tomatoes, green onions, garlic, salt, black pepper, cilantro and oyster sauce.  That’s it.

I spooned some over fluffy steamed rice, and took a taste.

The oyster sauce and fresh tomatoes had created a sea of umami goodness. The copious amount of chopped green onions added a zingy brightness to this intensely savory tasting dish that will have you smacking your lips. For so few ingredients, you’d never guess a dish would result with such deep, resonating flavors. But it sure does.

The only change I made was to reverse the order of cooking the ingredients. The recipe originally called for adding the tomatoes to the pan first, but I like to add them a little later in the cooking process so they don’t break down completely.

This is definitely a dish I’ll be making again and again. Thank goodness I took a chance to try it on for size.

(Serves 4 as part of a family-style meal)

10 cherry tomatoes, each cut in half

Wash the chicken breast and pat dry with a paper towel. Cut the chicken into 1/2-inch cubes and set aside. In a medium-sized skillet, heat vegetable oil to medium-hot. Add chicken and cook until nearly cooked through. Remove to a bowl and set aside.

Note: This recipe can easily be doubled for a larger crowd or to turn it into a main dish.

Adapted from a recipe from Cindy Vue, as published in “Cooking from the Heart” 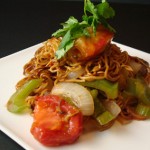 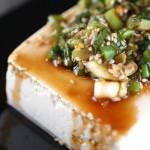 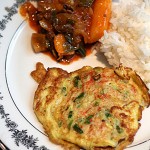