A Visit to Two Australian Wineries 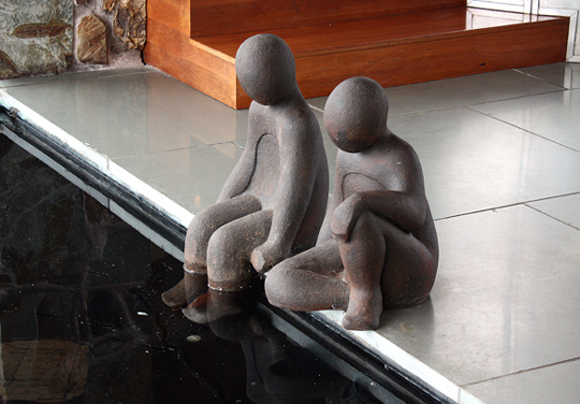 On my recent trip to Australia, sponsored by Boundary Bend Ltd., I had a chance to visit two outstanding wineries in this valley, the oldest wine region in the state of Victoria in the southern part of the continent.

With its stunning, contemporary main building with sweeping lines that echo the ridge line it overlooks, Yering Station hardly looks like the the oldest winery in the Yarra Valley. But the first grapes were planted here in 1838. 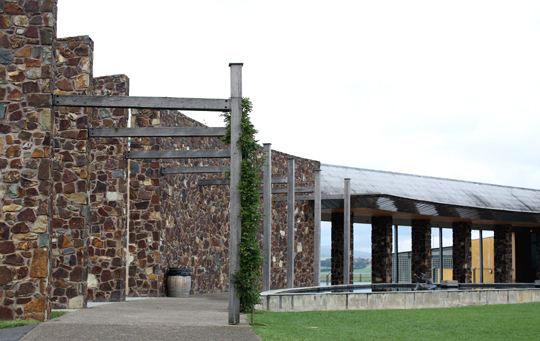 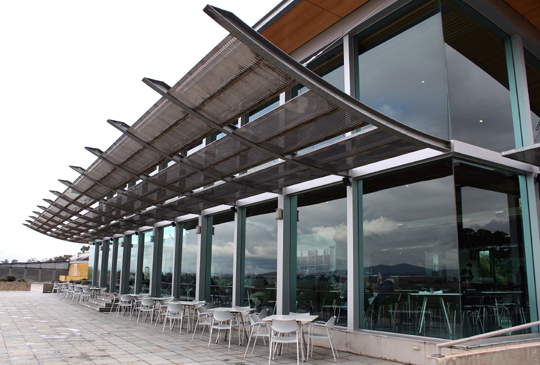 The family-owned winery is known for its Chardonnay, Pinot Noir, Shiraz and sparkling wines. In fact, Yerring Station’s Assistant Winemaker Marc Lunt says that many wine critics consider Australia second only to Burgundy, France for its quality of Chardonnay. The 2009 we tried was wonderfully creamy and tasted vaguely of peaches. It also had a lovely mineral note, giving it nice balance.

Yering Station also makes an interesting blend of Shiraz and Viognier, apparently a quite common marriage in the Yarra Valley because Merlot does not grow well here. The Viognier takes its place instead, softening the power of the Shiraz grape.

A small group of food journalists and I had the pleasure of dining at the winery’s fabulous restaurant with Lunt. The large dining room has a back wall of floor-to-ceiling windows that overlook the rolling hills. Even on an overcast day in the fall in the Southern Hemisphere, it was breathtaking. 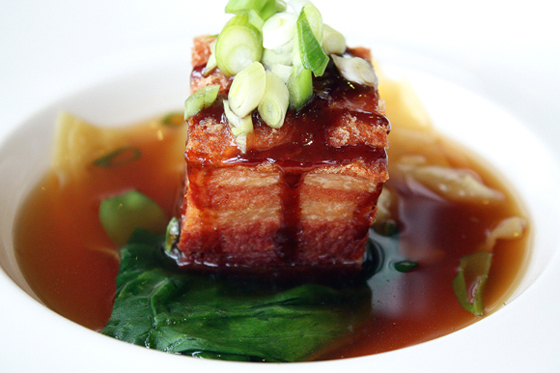 We shared an assortment of appetizers at lunch. You know a restaurant is good when it can turn out such outstanding dishes when the head chef isn’t even in the house that day.

The prices may seem high by American standards (about $21 each for the appetizers), but you have to take into consideration that the gratuity system is much different Down Under. In Australia, it’s not customary to tip 18 percent or what-have-you as it is in the United States.  Instead, even if you leave a token tip, it’s viewed as more than enough. So the prices reflect that.

The other interesting dining difference is that in Australia it’s against the law for a restaurant to wrap up your leftovers in a doggy bag for you to take home. A restaurant is only allowed to do that if it specifically has a to-go license. Our hosts explained that it was probably to safeguard against lawsuits from people who might claim they got sick after eating restaurant leftovers that languished in their refrigerator at home for days. Given how litigious we are in the United States, it’s a wonder a law like that hasn’t passed there.

Lunch began with barramundi, a fish native to Australia’s northern waters. The white, flaky fish was incorporated into a refreshing melon salad tossed in a spiced-honey vinaigrette and topped with crispy zucchini flowers filled with gooey cheese. 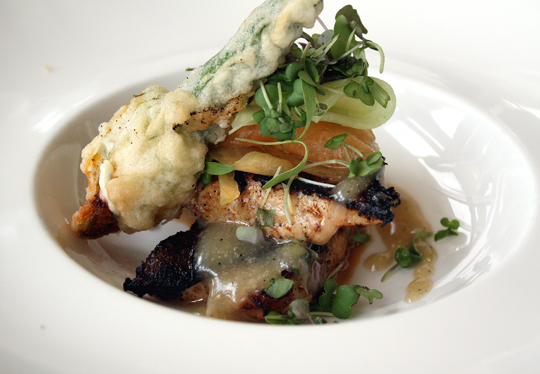 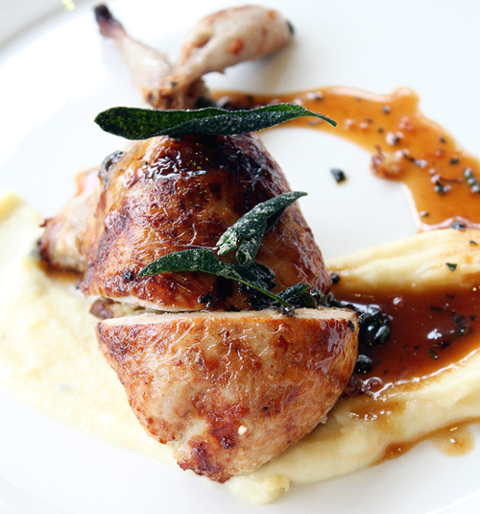 Quail was roasted with Muscatel until it was tender and juicy. Alongside was a buttery brioche stuffing, parsnip puree and an autumnal sage jus.

Duck got the Thai treatment — flavored in a zingy kaffir lime, coconut and ginger braise that made you want to scrape every last morsel off the plate.

Squid arrived in an earthenware dish, glazed with fortified Pedro Ximenez wine. Bits of chorizo were mixed in for a warm, spicy kick. 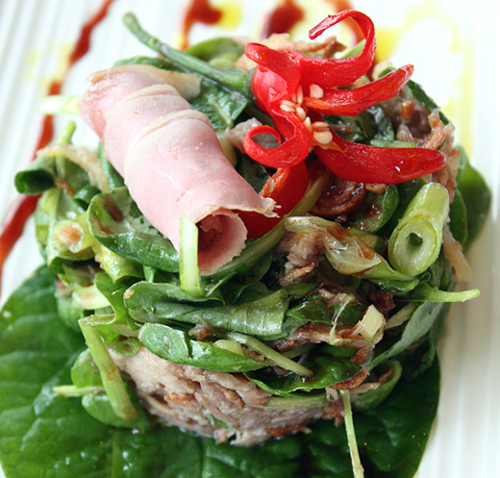 My favorite dish had to be the pork belly, one of the best renditions I’ve ever had. A cube of  juicy, fatty belly arrived in the center of a five-spice consomme, heady with star anise. The pork belly was crowned with skin so crisp, you almost felt embarrassed at the noise that emanated from your mouth with every bite.

We also had a chance to visit another family-owned, Yarra Valley winery that day, De Bortoli Wines, which was established in 1928. 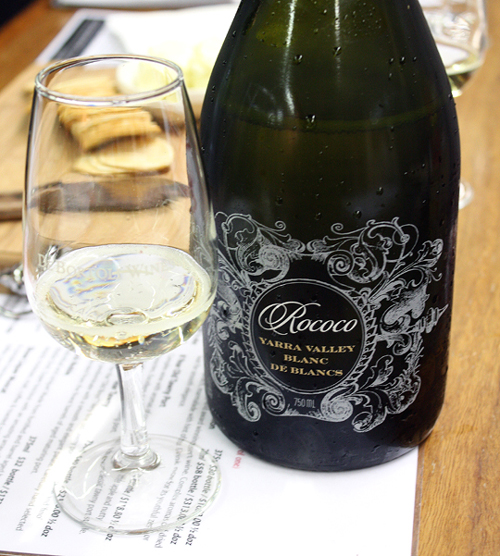 Now, third-generation-operated, the winery is an especially fun place to visit because it incorporates cheese tastings with wine tastings. In fact, the tasting room even sports its own cheese cave. Cheeses from all over the world are brought in — mostly by ship — and matured in this high-humidity room.

I had a chance to taste a wonderful goat’s blue cheese from Tasmania. With a distinctive pebbly-looking rind, the cheese had a real tang to it, with a very long, pungent finish. 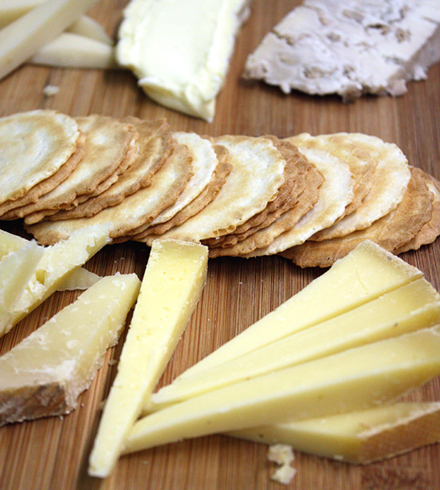 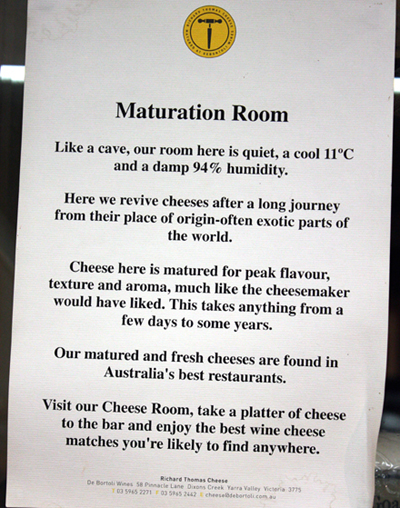 The Yarra Valley is known for Chardonnay, Pinot Noir and Cabarnet Sauvignon varietals. De Bortoli makes great use of those to be sure. But it also makes exceptional fortified wines that you shouldn’t miss. 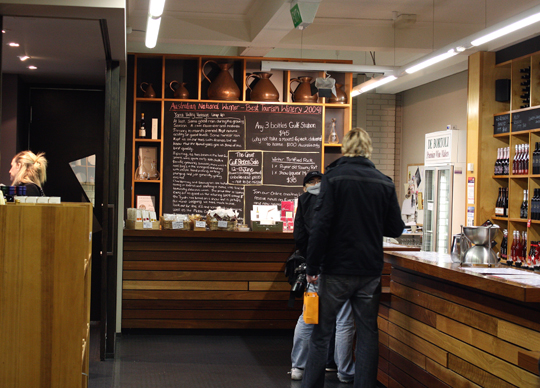 Its Noble One has won more awards than just about any other Australian wine. One sip of this golden-hued wine and you’ll understand why. Semillion grapes are left on the vine to develop Noble Rot or botrytis to create this stunning Sauternes-like sweet dessert wine.  The 2007 tastes like nectar made from peaches, apricots and candied orange peel. Pure heaven.

If packing luggage for a flight weren’t such a huge hassle these days, I would have gladly toted a bottle or two of this wine back home. As it is, it’ll just give me an excuse to visit the beautiful Yarra Valley again — as if I needed one.

TIP: To experience more of what the incredible Yarra Valley has to offer, check out Wine Compass’ Yarra Valley Tour. 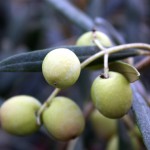