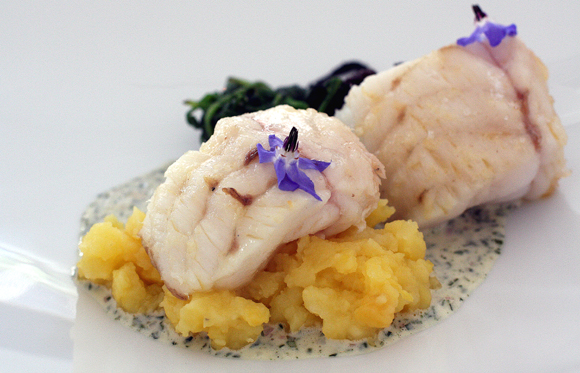 You know your hubby knows you well when he can already guess months ahead of time where you want to enjoy your birthday dinner.

Such was the case with my husband last month when he treated me to dinner at Oakland’s stellar Commis.

I don’t always tote a camera along to my own birthday dinner. How gauche, right? But since I had never dined at this tiny jewel box before, yet had interviewed Chef-Proprietor James Syhabout last year for my East Bay Express story about Oakland’s new-found notoriety as a dining mecca, I figured why not, especially since after opening last year,  Commis has garnered just about every accolade imaginable. That includes Syhabout’s recent honor as one of Food & Wine magazine’s 10 best new chefs of 2010.

It’s easy to see why.

The restaurant’s name comes from the French term for a chef’s apprentice, an allusion to the fact that Syhabout believes that a cook never stops learning. That may be so, but after dining at Commis, one comes away feeling that Syhabout and his crew already are miles ahead in know-how.

You won’t find any sign on the 31-seat restaurant in the newly hip Piedmont Avenue neighborhood. Syhabout jokes he doesn’t need one, as people manage to find the place just fine, thank you very much. It suits this restaurant, low-key and casual from the outside, like a designer purse that’s unadorned by over-the-top hardware or ostentatious initials. But all it takes is one peek inside at the seams to discern just how well made it is. 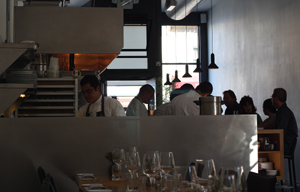 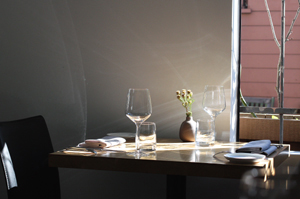 That’s not surprising given the talents of Syhabout, a young chef who’s already cooked at Coi in San Francisco, Manresa in Los Gatos and El Bulli in Spain.

Two dining options are offered in this contemporary, minimalist restaurant done up in a Calvin Klein palette: Six courses at one of the six counter seats for $95. Or three courses for $59 when you sit in the dining room. Wine pairings are an additional $29.

My hubby and I were there for the $59 prix fixe. It’s quite a deal, too, considering the amuse bouche, intermezzo and mignardise included with dinner.

Although some early reviews had complained about portions and pours being a little skimpy, friends had told me that was no longer the case anymore. Indeed, I found everything ample sized. And no, Meat Boy (aka the hubby) did not leave hungry.

The amuse bouche that evening arrived in a bowl looking like an egg with its yolk sunny-side up. But it wasn’t quite that at all. The egg yolk had been poached until it was solid, yet smooth and unctuous like a thick, spoon-able puree. The texture was just mind-boggling. The “white” was not egg at all, but a clever creamy onion soup. Alongside, were steel-cut oats to lend texture and dates for an unexpected subtle sweetness. If you’ve ever had the famous jiggly Arpege egg cooked in its own shell at Manresa, you’ll recognize the luxurious mineral-y, tangy and fruity flavors here, but in a wholly different form.

The hubby opted for grilled scallops with raw almond vinaigrette and a warm mousse of white beans for his starter. The silky scallops were paired with favas, picked so young that you could eat the pods, which had a robust green bean-flavor in that state. 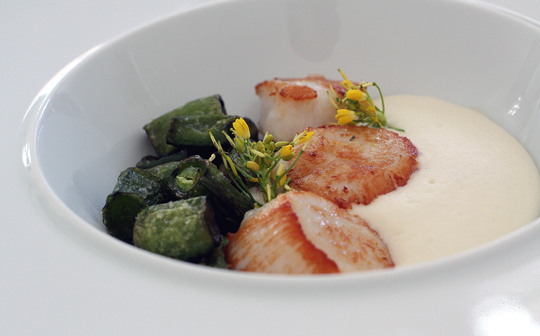 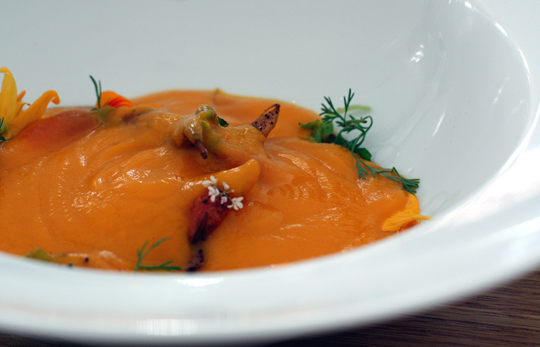 As it was a quite toasty evening, I began with a chilled, velvety, sweet carrot soup, which was poured table-side over flowering herbs, chicory root and tiny carrot pieces glazed with sweet tarweed honey. It was the most intense carrot soup I’d ever had — so concentrated and so vivid orange that I nearly could have stopped there.

But that would have been a shame, as I would have missed my entree of monk fish cooked on the bone to lend it even more succulence and afloat in a shallow pool of creamy tarragon creme fraiche sauce that was topped with delicate borage flowers. 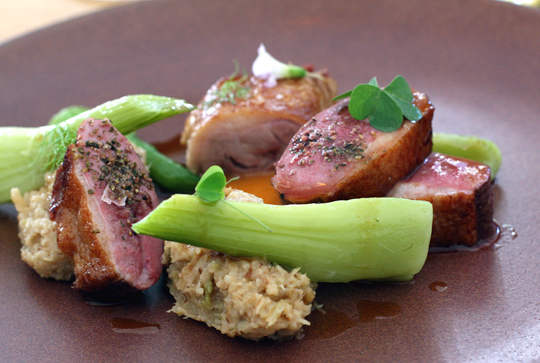 My husband much enjoyed his roasted Sonoma County duck, with the leg cooked sous-vide and the breast pan-roasted. The skin may not have been shatteringly crisp, but the flesh itself was fabulously silky so that every bite was sheer pleasure. For dessert, we had the poached white peaches served in a chilled, creamy elegant soup accented by lemon verbena and fluffy champagne “snow.” It was refreshing, with a real clarity of flavors. We also had the chocolate brioche, which was like a very soft cake imbued with deep earthiness, and served with strawberries and a fluff of chartreuse chantilly cream. 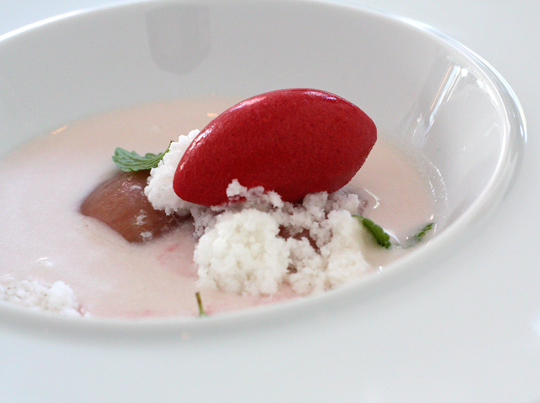 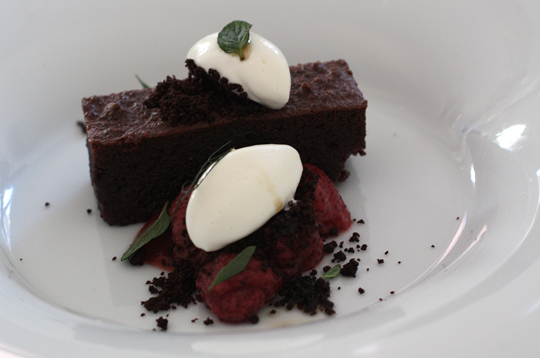 The evening ended with two bite-size, deep green squares of pate de fruits. Only these weren’t fruit-flavored, but absinthe-flavored. Yes, a potent good-bye of licorice, citrus and herbal notes.

Commis may mean apprentice. But already, it could sure teach a lot of other places a thing or two.