Take Five with Spencer on the Go’s Chef Laurent Katgely, on His Upcoming Debut on the Food Network 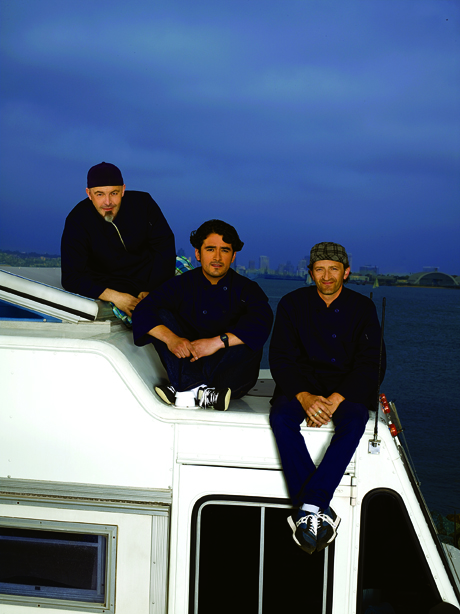 In a sign of just how significant and prevalent the revved-up food truck craze has grown, the Food Network debuts a new show Aug. 15 that will pit seven food trucks against one another in all manner of zany food challenges.

A native of the French Alps who started cooking when he was only 14 years old, Katgely apprenticed at the esteemed Alain Chapel in France, before working at Lespinasse in New York, Pastis in Los Angeles, Boulevard in San Francisco, and Foreign Cinema in San Francisco. He opened Chez Spencer with his wife in 2002. The restaurant is named for their 10-year son. 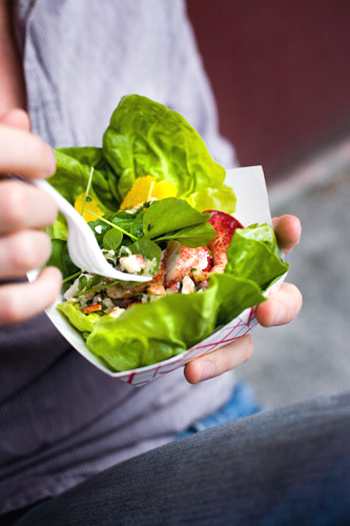 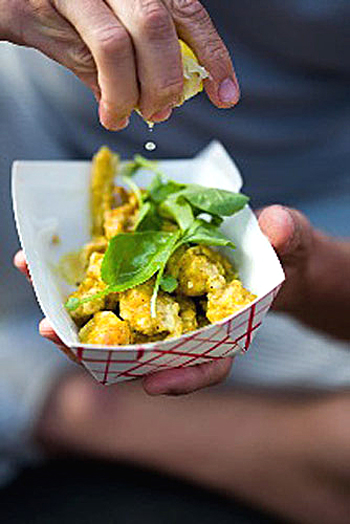 Q: With your classic training and impressive background, did you ever think one day that you’d be driving a taco truck around America on national TV?

A: No! (laughs) It’s kind of funny. But I like doing new things. I’ll try anything.

Q: How did you get involved with the show?

A: I got a call last October, then talked to the Food Network more about it in March. It sounded kind of interesting. I thought it would be great for the restaurant, too. I figured it couldn’t hurt.

Q: Did you feel extra pressure being the only truck from the Bay Area?

A: There is pressure, but I just try to go with the flow. Being in the business 27 years, I think the pressure just disappears. You just go and cook, and see what happens.

I’m pretty competitive. I play soccer. Plus, with work, we’re kind of competitive, but we like to have fun, too. It was a good excuse for me to get out of the restaurant. I had to commit to being away four to six weeks for the show this past spring.

Q: Were the food challenges difficult?

A: They were different and fun. With our menu here, we’re used to adjusting. So, I think we had an advantage in that we’re able to adapt easily. That’s where experience comes in. In the kitchen, we’re used to thinking fast.

Q: Are you a fan of other reality food shows such as “Top Chef’’ or “Iron Chef America’’?

A: I run a restaurant, so I don’t have time to watch a lot of TV. To be honest, when I met the host of this show, Tyler Florence, I didn’t even know who he was.

The only time I watched “Top Chef’’ was when Erik Hopfinger of San Francisco competed, because I know him.

If I do watch TV, it’s usually the Discovery Channel with my son.

Q: What surprised you most about doing this show?

A: The selection of the trucks. Five out of seven came from Los Angeles. I expected a truck from every single corner of the country. Like Chicago and Seattle have amazing trucks. I think there were better trucks around to be chosen. I found the selection kind of strange.

Q: What do you think you gained from doing the show?

A: I did learn something somewhere, I’m sure. Ah, I know! I know how to drive better now. (laughs)

Q: You got the idea to do your own truck, Spencer’s on the Go, from seeing a taco truck parked regularly near your restaurant?

A: It’s a taco truck about a half block away. When we’re too busy to make lunch, we go there to eat. We became friends with the guys there. We joked that we’d open up one next to them. And the more we talked about it, the more we got into it.

In Stockton, there were a lot of taco trucks serving the construction workers. But that slowed down with the recession. They were getting rid of a lot of the trucks. So I went there and bought one for $15,000. It was just going to be a side project. I didn’t expect it to do that well. But we opened at the right time, what with the recession. And people seem to like the bohemian feeling of eating outside. 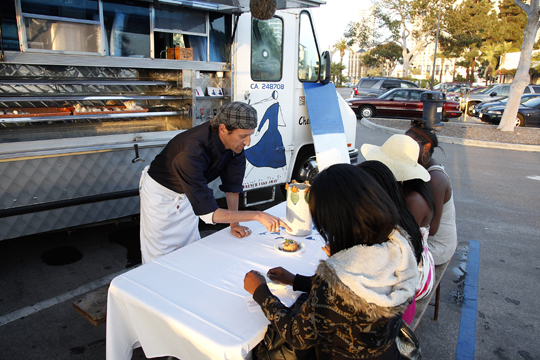 Q: Do you still work on the truck?

A: Two people man it on the streets. If it’s used for a private event, we add more people to help.

I worked on the truck for four months. Now, I mostly do the private events. And I prep the food in the restaurant kitchen before the truck goes out.

Q: Are you amazed at the success of the truck?

A: I think we’ve turned on a lot of people to escargot who had never tried it before.

We added a movie screen to the parking lot where we have the truck. The projector is inside the truck and it shows on a tablecloth draped over a metal stand. It brings a little ambiance at night.

Q: Do you think the truck craze is a fad or a trend that’s here to stay?

A: With people watching their wallets so much, it’s definitely here to stay. And it will evolve. Even crazier trucks will come out. There are just so many things you can do on wheels. 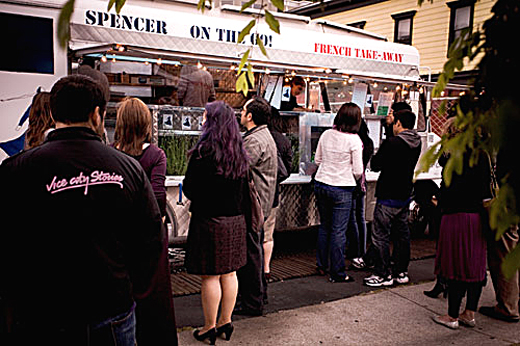