A Taste of France At Cafe Des Amis 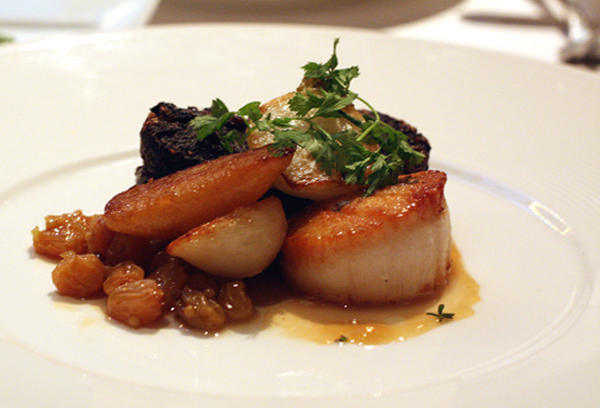 Walking into the glam back dining room of the new Cafe Des Amis in San Francisco’s Cow Hollow neighborhood, I felt like I should have donned an elegant Hermes scarf for the occasion.

If only I owned one.

The three-month old restaurant, a short drive from the Fairmont Heritage Place San Francisco, was four years in the making. But it was worth the wait. 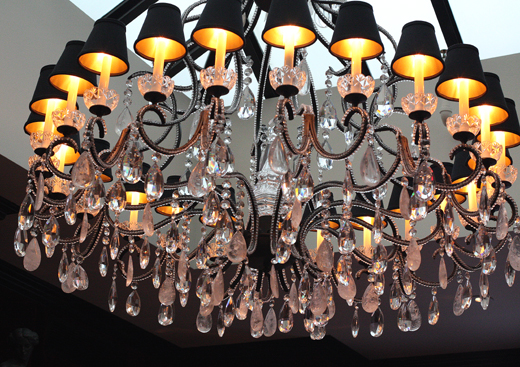 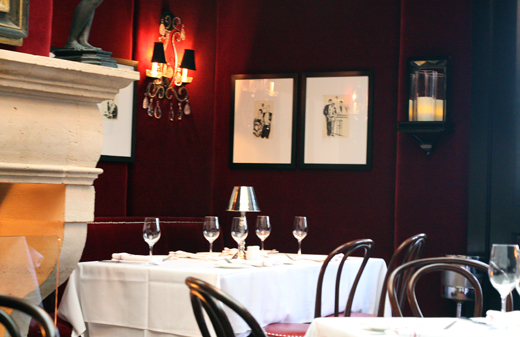 Attention to detail is evident, as when the table next to ours was reset and a busser actually brought out a cordless iron to smooth the creases in the white tablecloth.

On a recent Saturday night, when I was invited to dine as a guest of the restaurant, the 200-seat establishment that stays open daily till 1 a.m. was bustling with diners. And this was a slow night, according to our server.

The Bacchus Management Group — which also owns Spruce in San Francisco, the Village Pub in Woodside, Mayfield Bakery & Cafe in Palo Alto, and numerous Pizza Antica outposts — joined with Perry Butler of Perry’s restaurant in San Francisco, who acquired the old Prego spot, a half block from his famous bar, in 2005. They brought on board Chef Edward Carew, who has cooked at top New York spots such as Grammercy Tavern, Eleven Madison Park and Craft, as well as San Francisco’s Florio, where he was the executive chef.

You may not need an Hermes scarf to enjoy yourself here. But deep pockets help if you want to order a few of the dishes, such as the “Cote de Boeuf” with marrow and frites at $86 for two.

I started with a “Greyhound’s Tooth” ($11), an amber-colored cocktail of Benedictine, vodka, house-made grapefruit bitters, and lemon served in an old-school, bowl-shaped champagne glass garnished with a big, bold curl of grapefruit peel.

We started with an appetizer of a plump seared diver scallop ($14) served alongside slices of boudin noir. The blood sausage had a wonderfully fluffy texture and wasn’t overly minerally tasting.  Sweet turnips and a tangy pickled mustard seed and raisin gastrique cut through the richness nicely. 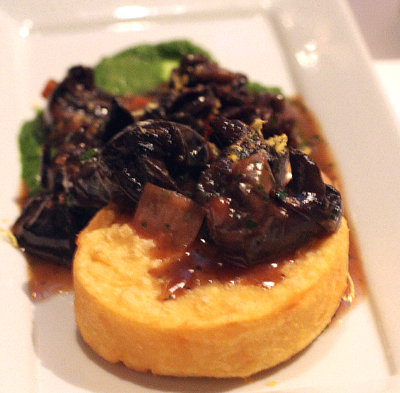 Next, a daube of tender escargot enriched with bone marrow, wine and garlic ($12) and the brightness of parsley. 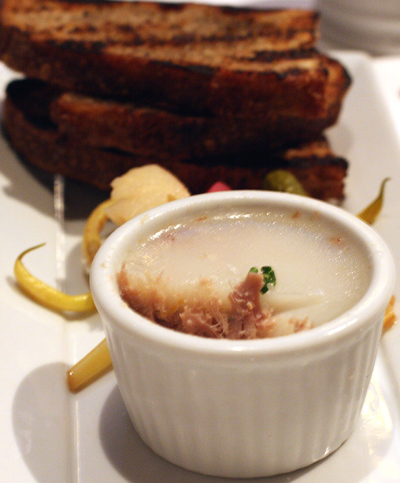 The restaurant makes all of its own charcuterie, so we couldn’t resist trying the terrine of duck rillettes ($7) that came with fabulous bread (from Mayfield Bakery, of course) that had been grilled to stand up to a heavy smear of the meaty, rustic pate. And believe me, it’s so good you’ll want to spread it on thick. 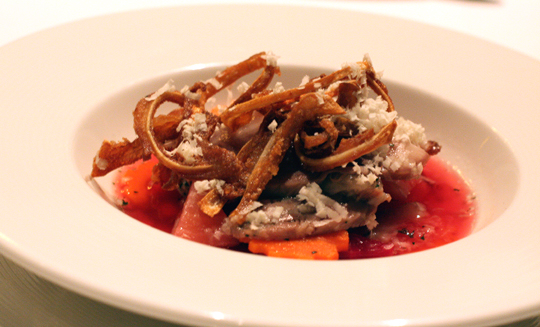 When I spied “Tete de Cochon” ($11) on the menu, I was expecting a thick slab of head cheese. But it wasn’t that at all. Instead, the terrine was shaved, making it much lighter. It also was atop an almost borscht-like broth of beef consomme and beet juice that was enlivened with tangy pickled onions. The crowning touch was wispy curls of fried pig ear scattered over the top. There was a lot going on in this bowl, so that every spoonful brought a new nuance. 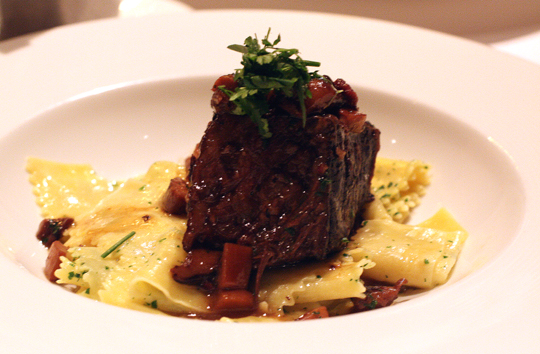 My husband chose the Saturday special of beef bourgignon ($27). The meat didn’t need a knife, but it maybe lacked a certain je ne sais quoi in depth of flavor. What really made the dish, though, were the house-made egg noodles, which were soft, slippery and so satisfying. The side of frites ($6) arrived hot with creamy interiors but exteriors that could have been crispier. 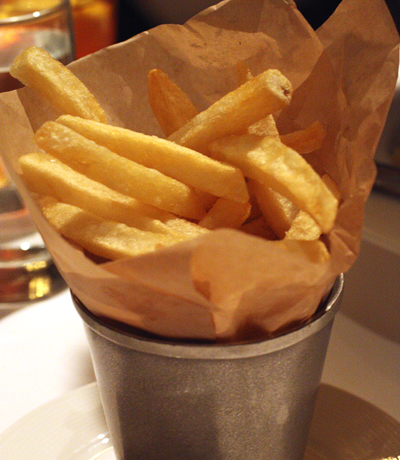 My “Grilled Loup De Mer Provencal” ($27) was essentially a traditional boullabaise, with pieces of sea bass, mussels and shrimp in a thick, saffron-infused broth made all the more special by the addition of a crisp crouton smeared with sea urchin. 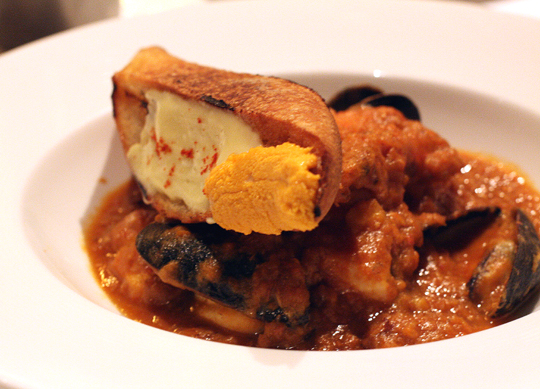 For dessert, we enjoyed a slice of the “24-Layer Crepe Cake” ($8). OK, so it’s not actually 24 layers, and General Manager Scott Stewart laughed when he caught us counting them. He said about 50 percent of the people who order it try to pick it apart to determine just how many layers there are. Suffice to say, there are about six crepes stacked on top of one another, with soft whipped cream in between each one. The whole thing gets doused with orange-chamomile syrup and garnished with fresh figs. If you’re one who likes to indulge in whipped cream on your brunch pancakes, you’ll enjoy this far more as crepe and cream essentially become one dreamy union.

I don’t know the next time I’ll get to Paris again. But at least I can feel the part — Hermes scarf or not — at Cafe des Amis. 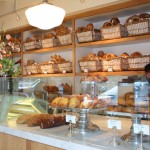