That’s why I was pleasantly surprised when I tried Fleming’s Prime Steakhouse & Wine Bar for the first time.

Fleming’s has more than 50 locations nationwide. Recently, I was invited to dine as a guest at the Palo Alto restaurant in Stanford Shopping Center.

Even on a Tuesday night, the restaurant was packed, with patrons vying for seats at both the bar and the dimly lit dining room with its deep red leather booths that overlook a bustling kitchen line.

As with most steakhouses, the prices here are not necessarily cheap. But the quality of the cooking and the generous portion sizes make you feel that you’ve gotten your money’s worth.

It’s also a good place to go if not everyone in your party is a steak fanatic, as there are plenty of seafood choices, as well as a double-thick pork rib chop with apple cider and Creole mustard glaze, and a double breast of chicken baked in a white wine-mushroom-shallot sauce.

I also like how Fleming’s takes the effort to put a modern spin on steakhouse classics. 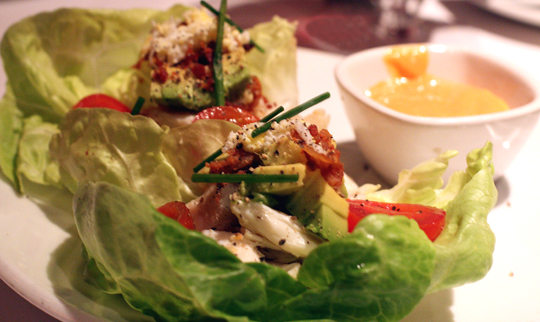 Instead of a plate piled high, the crab Louis ($10.95) here is done as dainty butter lettuce wraps that enfold big chunks of crab, as well as avocado, bacon, egg and tomato. It’s a little messy to pick up with your fingers, so feel free to use a knife and fork if you like.

The shrimp cocktail ($15.95) was another surprise. We were expecting the usual martini or parfait glass with shrimp hanging off the edge. Instead, the jumbo shrimp were intertwined into a pyramid on a plate, with a tangy, crunchy fresh veggie salsa on the bottom and puddles of chipotle horseradish cocktail sauce for dipping.

When you first sit down, a warm loaf of house-baked crusty, rosemary bread is brought to the table with a feta spread and a sun-dried tomato butter. Try to restrain yourself from devouring the entire loaf. It won’t be easy. For my entree, I went with the “Barbecue Scottish Salmon Fillet” ($29.95). Atop a super hot serving plate, two fillets were cooked perfectly, with the flesh tender and succulent. The fish was brushed with a barbecue glaze that was sweet and tangy, and thankfully, did not overpower the salmon. Underneath was a bed of sauteed mushrooms.

My husband, aka Meat Boy, had the “Prime Bone-In Rib-Eye” ($43.50), which weighed in at a total of 22 ounces. The meat was beefy and rich, and basted in butter for extra luxuriousness.

On the side, he opted for a classic baked potato ($6.95), served with all the accouterments on the side (sour cream, butter, chives, bacon, and cheddar cheese), so you could add as little or much as you wanted of each. We also shared a side of the French green beans, sauteed until still crunchy with earthy shiitake mushrooms and porcini dust.

For dessert, we shared one of the lighter options, if there can be such a thing at a steakhouse — “Frozen Lemon Gingersnap Pie.” 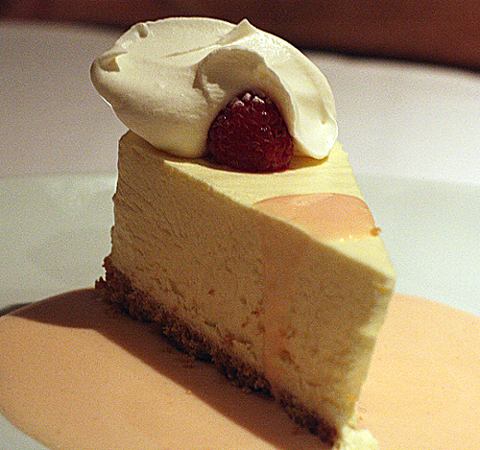 It looks like a wedge of Key Lime Pie, but it’s actually frozen lemon custard on a gingersnap crust with a drizzle of raspberry-lemon sauce. Tangy and refreshing, it just melts in the mouth. A nice touch is the bowl of Chantilly cream on the side so you can top off the pie with as much as you like.

Thanks to Fleming’s, my faith in big-chain steakhouses has been restored. At least, in this case.