Take Five with Ming Tsai, on His Experiences on the “Next Iron Chef” He’s only 46 years old, but Chef Ming Tsai of the 12-year-old Blue Ginger restaurant in Massachusetts was an early pioneer of modern-day cooking shows with his innovative East-meets-West flavors that are more relevant today than ever.

Indeed, he’s now doing Season 8 of his “Simply Ming’’ show on public television. And he just missed winning this season’s “Next Iron Chef’’ competition on the Food Network, coming in third.

Yesterday, I had a chance to talk to him by phone about how the landscape of food television has changed, as well as his timely new cookbook, “Simply Ming One-Pot Meals” (Kyle Books).

Q: When the lineup for ‘Next Iron Chef’ was first announced, a lot of folks were surprised to see your name. In fact, my friends thought that the Food Network should have just made you an Iron Chef, that you’d already earned it after all these years.

A: I wish your friends worked at the Food Network. (laughs) It would have saved me a lot of work and time.

Q: Why did you want to compete on the show?

A: For fun. I enjoy competition and cooking. It’s the only format out there that’s legit. I think the judges were fair, though, I didn’t always agree with what was said. But Michael Symon was spot-on for the most part.

It was as hard as I thought it would be. You have 30 minutes to do one dish or 60 minutes to do several dishes. You just have to put your head down and go for it. The hardest challenge was the Vegas buffet. It was brutal. People were getting delirious.

I’m certainly glad I did it. I made some great friends for life. Marc Forgione and Bryan Caswell are solid guys. Those are guys I probably would have never hung with. They’re 10-15 years younger than me. I tend to hang out with Jean Georges (Vongerichten) and Daniel (Boulud) — guys like that.

Q: I heard that some of the other chefs such as Duskie Estes were calling you, ‘Uncle Ming’?

A: Some of them did say that. (Marco) Canora called me that and he’s 43! I was the oldest there. But I was not in the worst shape of any of them. I loved the fact that they were thinking about me so much for the first couple of shows that they weren’t even concentrating on their own food.

Q: Did you like the way you were portrayed, i.e. the comments about your plating being stuck in the 1980s and the scene with the messy sous vide machine?

A: That was just one judge’s comment. I didn’t agree with Jose Garces when he said that. I used the appropriate dish.

I think the editing was fine. My sous vide bag exploded. It happens. It made for good drama with Canora running around and saying that I destroyed the machine. To their credit, the Food Network put in the part where I cleaned the machine. As a chef, you always clean up after yourself, even in competition.

In the second show, I was almost eliminated. The camera showed me frowning. But that frown was from four days before. They take things and store them. Like when they need a ‘pissed-off Ming,’ then they’ll have it. I almost screwed them up a few times, though. My wife made me headbands to wear while I cooked. They were all different colors. But sometimes they couldn’t combine shots when I was wearing one headband one day and a different colored one the next.

Q: Were you happy with how you did?

A: I wanted to win, of course. Getting third place was great. I was one away from the finale. I’m proud of my food. That lardo dish?  I was proud of that. Symon thought it was sublime. Two judges didn’t love it, though. What are you going to do? Not everyone has taste. But they were all fair. It’s better to lose that way than by over-salting things like a certain chef did three times, but didn’t get eliminated and whose name I won’t mention.

Q: I think I know who that is –- as does everyone else who watched the show. (hah)

What do you think about cooking shows these days being so much about competition?

A: I much prefer the old shows like Jacques Pepin, Julia Child, and Mario Batali’s first series. So many cooking shows now are not about teaching cooking. They teach you how to open cans of stuff to make something. They’re not cooking shows, they’re sustenance shows. I’m not saying they’re bad. They have their niche.

Today it’s all about entertainment. It’s just changing with the times. I still prefer watching the old cooking shows. But I have a different motive. I’m looking for new techniques. I don’t look at it for entertainment.

Q: Will we see you on ‘Top Chef Masters’?

A: No. That was my one shot. No more. It was a good ride. If I did compete on ‘Top Chef Masters,’ I would have done it the first season. Those were my buds on that first season. But I was too busy then to do it.

Q: You graduated from Yale with a degree in engineering? Sounds very Asian. I’m guessing you never wish you had become an engineer instead?

Q: In this day and age of chefs owning empires of restaurants, why do you have only the one?

A: For quality of life. I have two kids. I get to see them. I get to travel and do the things I want to do. I don’t make as much money as those other guys; but how much money do you need? Q: You just came out with your third cookbook, ‘Simply Ming One-Pot Meals.’ Is this the way you typically cook at home?

A: Yes, I do a lot of the cooking at home. I go home for dinner, and then I’ll go back to the restaurant to work. My family absolutely does one-pot cooking. It’s chow mein, chicken and rice, and stir-fries. If you just start with garlic and onions, the kids will eat it.

One-pot cooking is very simple, it’s easy to cook, and it’s easy to clean up. It’s tasty, healthy food. It’s also really affordable food. With the recipes in this book, you can feed a family of four for under $20.

Q: The term ‘fusion’ has gone from trendy to pejorative. Yet you’ve been able to straddle the East-meets-West line successfully. How have you managed to do that?

A: I’ve never used the ‘fusion’ term, myself. Fusion is what you do with atoms. My food is blending. And really, nowadays, every chef does East-West. They don’t claim to do that. But they’re all using sesame oil, lemon grass and soy sauce.

Q: You’ve become a spokesperson for food allergy issues. Why is this cause so important to you?

A: There are two reasons. There are so many food allergies out there. You need to know what’s in your food and to accommodate your customers. Second, my first son was born with severe allergies to peanuts and seafood. So, I know how difficult it can be to live with allergies like that.

Q: So, what’s one thing people would be surprised to learn about you?

Hmm. I guess I would say that I’m much more sarcastic in person than what comes out on TV. 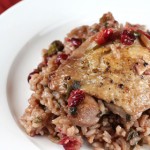 Tomorrow: A Festive Chicken and Rice Dish from Ming Tsai 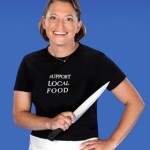 More: My Q&A with “Next Iron Chef” Competitor Duskie Estes