A Visit to the 26th Annual Chefs’ Holidays in Yosemite 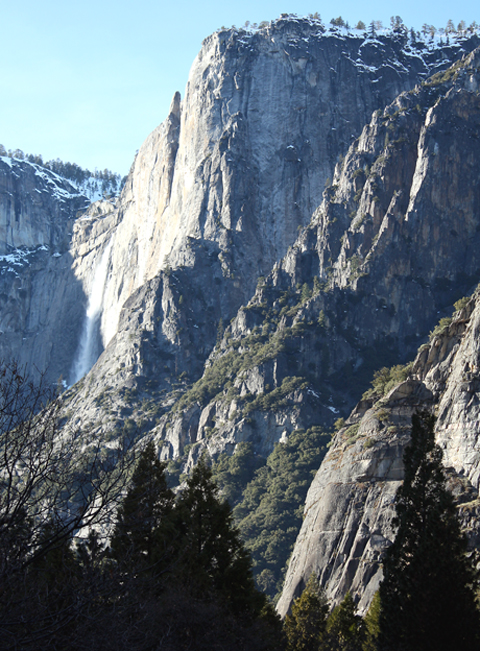 YOSEMITE NATIONAL PARK, CA — Imagine hiking, snowshoeing and skiing, then dining on creative fare from celeb chefs — all in a breathtakingly spectacular setting.

That’s what Yosemite National Park is all about in the winter, when its “Chefs’ Holidays” takes place at the historic Ahwahnee Hotel, now through Feb. 4. Marking its 26th year, the event features 29 prominent chefs from around the country.

Three chefs are featured per session, which includes a “Meet the Chefs” reception, three cooking demonstrations, a five-course gala dinner with wines in the grand Ahwahnee dining room, and a tour of the hotel’s massive kitchen.

And what a hotel it is. Opened in 1927 with a concrete and steel frame designed to withstand fire, it cost $1.25 million to build or the equivalent of $19 million in today’s dollars. During a year of construction, costs grew and the project had to be scaled back. The building went from a planned 10 stories to seven. Although the kitchen had already been built, the dining room was reduced to a third of its original size to about 300 seats, as opposed to the original 1,000. As a result, the kitchen is actually 200 square feet larger than the main dining room. 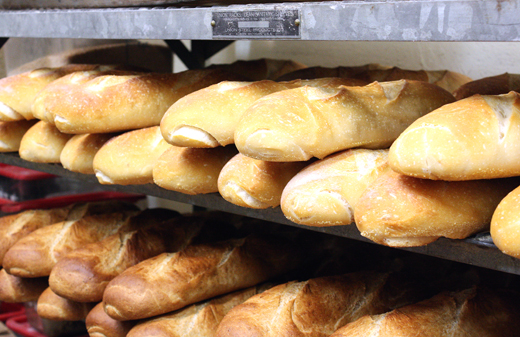 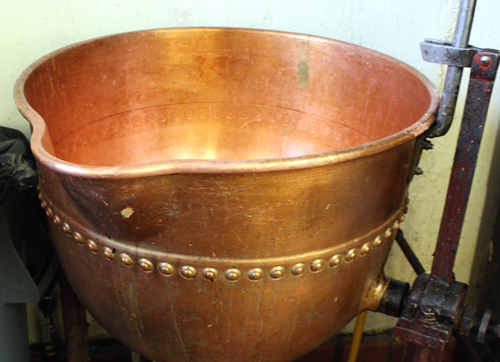 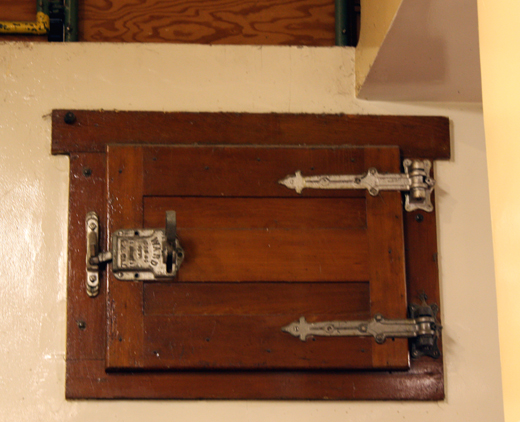 Yours truly was lucky enough to be invited as a guest to the second of the eight sessions planned. This one, held during the second week of January, featured chefs Michael Tusk of Quince in San Francisco; Jesse Cool of Flea St. Cafe in Menlo Park; and Colin Ambrose of Estia’s Little Kitchen in Sag Harbor, NY.

Ambrose, who originally studied advertising and worked at Sports Illustrated for awhile, did stages with top chefs, Michael Mina, Bobby Flay, and Charlie Palmer, who is godfather to his youngest child. 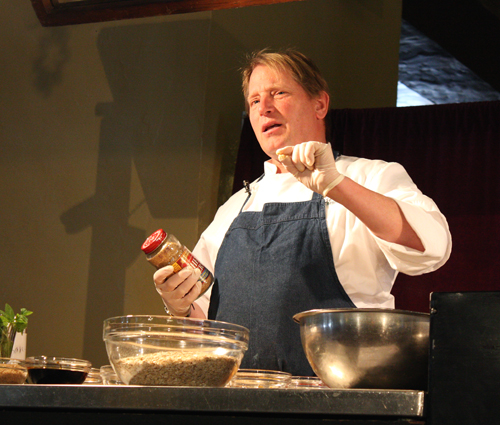 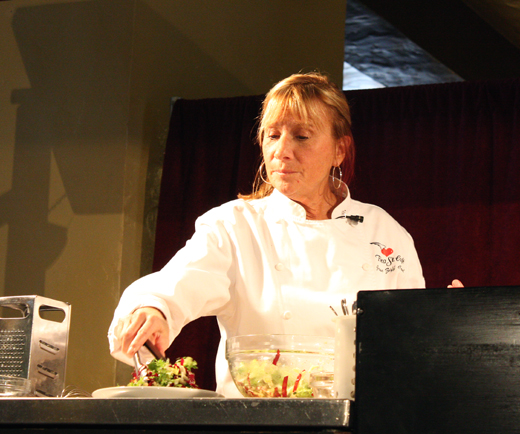 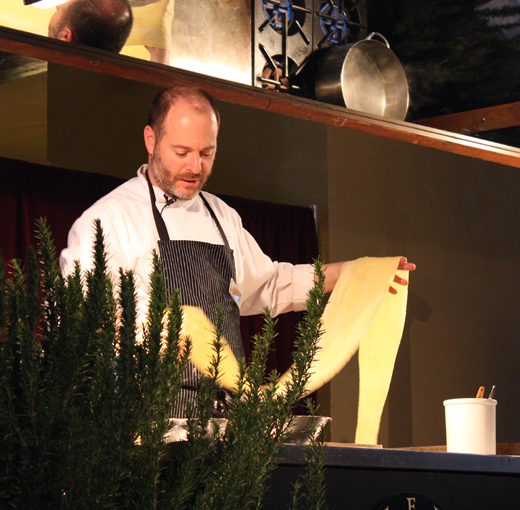 His Hamptons cafe is popular with celebs such as Alec Baldwin, Matthew Broderick and Sarah Jessica Parker. With breakfast hugely popular at his cafe, Ambrose demonstrated how to make his housemade granola, made with rolled oats, wheat germ, walnuts, sunflower seeds, white sesame seeds, brown sugar, honey and molasses.

He also showed how to make another popular menu item, “A’s Pop Breakfast Bowl,” a hearty dish that starts with a bed of aromatic red quinoa that gets topped with sliced chicken in a spicy tomato sauce, along with a fluffy egg-white veggie scramble. 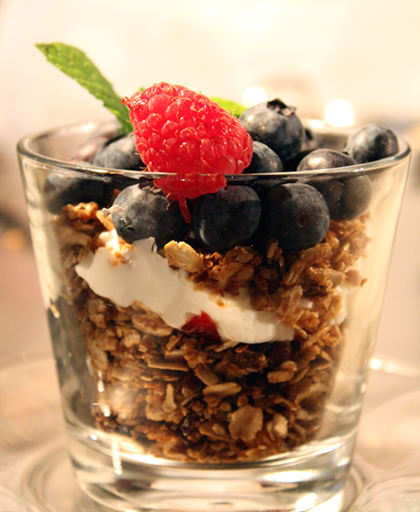 Cool, with assistance from her Executive Chef Carlos Canada, took the stage to show how to make a dazzling fuchsia beet-potato gnocchi. She uses a gentle touch and as little flour as possible to ensure the gnocchi come out ethereal. 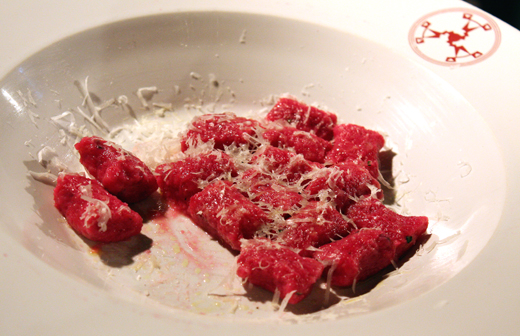 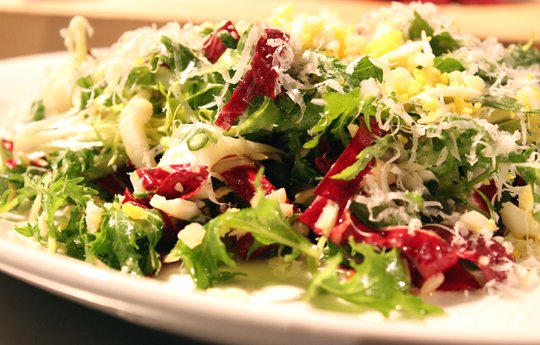 Her other dish was so simple yet so satisfying — a salad made with bitter, crunchy greens such as radicchio, endive, dandelion and frisee, all cut in a chiffonade, then tossed with capers, chopped hard boiled eggs, shaved parmesan and a red wine vinegar-garlic-olive oil vinaigrette that had a touch of brown sugar. It was crunchy, fresh and assertive — everything you want in a salad in the blah days of winter.

In his demo, Tusk made probably the trickiest dish of all — raviolo with a filling of housemade ricotta and an egg yolk that remains oozy when you cut into it after it’s cooked.

The egg yolk-rich pasta dough was made in a stand mixer, then rolled it out in a pasta machine until it was as thin as possible. Ricotta was spooned on and formed into a nest-shape to hold the raw yolk in place. A second sheet of pasta dough was carefully placed on top, and the large raviolio cut out and sealed together. Tusk dropped them into a pan of simmering water, taking care so that the raviolo remained upright with the yolk on top at all times.

After about three minutes, he removed the raviolo from the water and placed one on a serving plate with a drizzle of browned butter sauce. He cut into it, and sure enough, the yolk was still seductively molten. 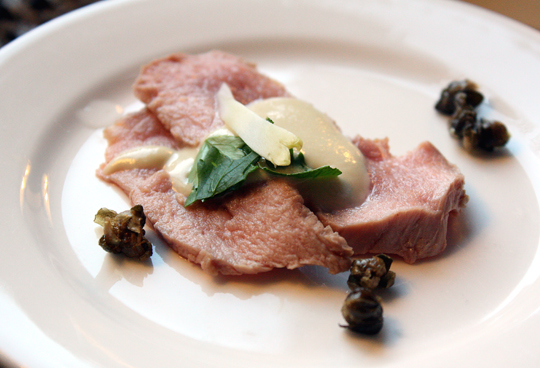 Although we didn’t get to try that dish at the demo — that would come later at the gala dinner that Tusk cooked — we did get a chance that afternoon to dig into small tastes of his version of vitello tonnato, the classic Italian dish of veal loin served with a creamy, mayonnaise-like sauce of tuna, anchovies, garlic, lemon and egg yolks. If you’ve ever doubted that veal and tuna could ever marry, one taste of this dish will have you convinced of their harmony. 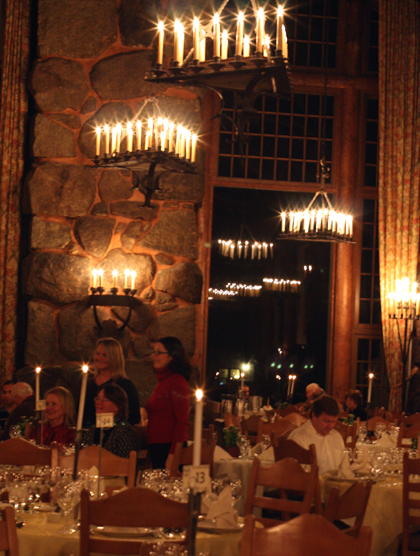 With soaring windows, imposing stone walls and a profusion of glowing chandeliers, the Ahwahnee dining room is a sight to behold in the evening. As you enter, the waitstaff is lined up almost in a gauntlet to greet you and to escort you to one of the large round tables set with crisp linens and Ahwahnee-design charger plates. 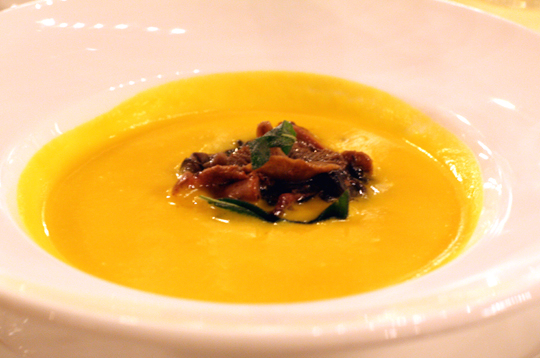 Dinner began with Tusk’s velvety pumpkin soup garnished with wild mushrooms and fried sage. That was followed by the famous raviolo with the runny yolk. Pillowy and luxurious, it was unforgettable. 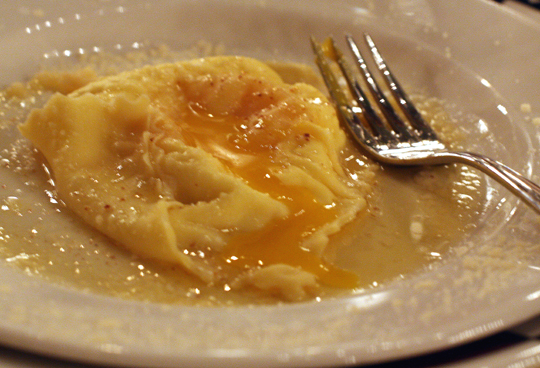 Another pasta followed —  tiny agnolotti filled with veal that tasted both light and delicate, yet utterly meaty at the same time. 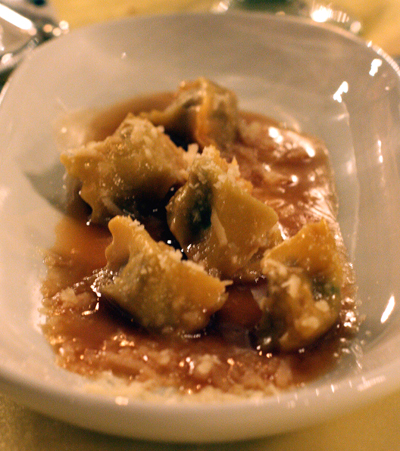 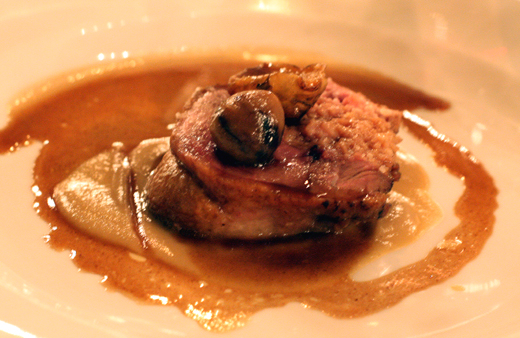 Next, duck in Barolo wine sauce with creamy Jerusalem artichoke puree and chestnuts.

Dessert was a perfectly jiggly panna cotta with sweet persimmons. 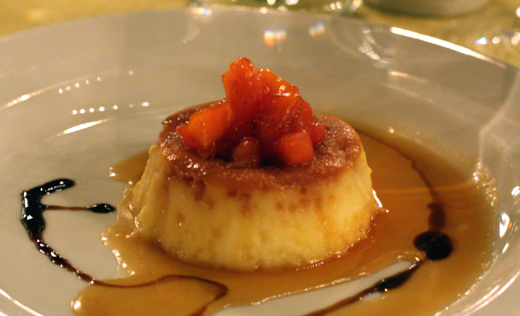 Among the other chefs scheduled to participate in the “Chefs Holidays” are Douglas Keane of Cyrus in Healdsburg on Jan. 24; Suzanne Goin of Lucques in Los Angeles on Jan. 27; and Duskie Estes and her husband John Stewart, both of Zazu and Bovolo in Sonoma County, on Feb. 2.

If you’d like to experience the event, two- and three-night vacation packages are available at the Ahwahnee and Yosemite Lodge at the Falls, starting at $995 and $695 respectively, and include lodging and admission for two to the “Chefs’ Holidays” events.

Tickets for only the gala are $269 per person, including tax and gratuity. 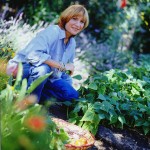 More: My Q&A with Jesse Cool