No Dill-y-Dallying to This Dish 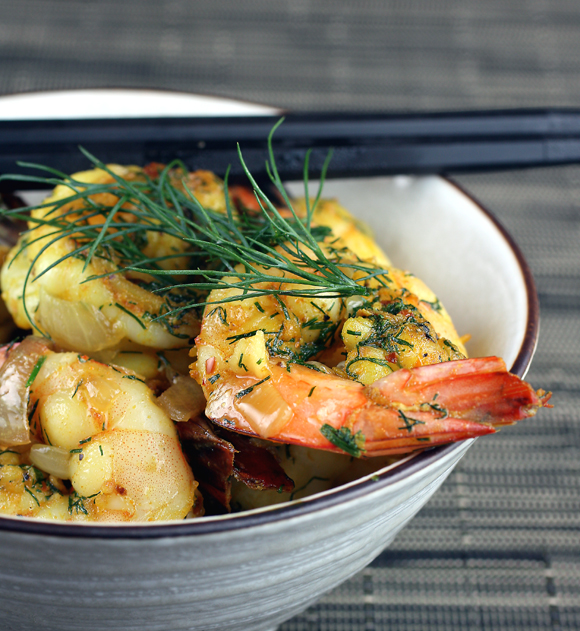 Dill is like cilantro’s twin brother — either people hate the poor guy or adore him. There’s no in-between.

The feathery-leafed herb with the assertive flavor is all too often forgotten, too. Unless we’re making gravlax or pickling veggies, it’s not often an herb we have on hand.

That’s a shame because dill’s distinctiveness can lend a dish real punch.

See for yourself by making “Malaysian-Style Stir-Fried Turmeric Shrimp.”

The recipe is from “Stir-Frying to the Sky’s Edge” (Simon & Schuster) by Chinese cooking authority, Grace Young.

The dish was created by Mei Chau, a former restaurateur in New York, who was born in Malaysia and is of Hakka descent.

It’s a quick stir-fry dish, which starts with marinating large shrimp with chilies, dill, pepper, and turmeric that imparts a deep yellow hue to the dish. Garlic and shallots get tossed around in a hot wok, then the shrimp are added and allowed to sear. In just three minutes, it’s ready to be served.

If you’re not a dill fan, no worries. The dish also can be made instead with curry leaves, which will lend a lovely citrus note. Either way, you can’t go wrong.

In a small bowl, cover chilies in cold water for 1 hour. Drain chilies an cut into 1/2-inch pieces with the seeds. Using kitchen shears, cut through the shrimp shells two-thirds of the length down the back of the shrimp. Remove legs and devein the shrimp, leaving the shells and tails on. In a medium bowl combine the shrimp, chilies, curry leaves or dill, turmeric, and pepper. Stir to combine and marinate at room temperature for 20 minutes. Stir in sugar.

Heat a 14-inch flat-bottom wok or 12-inch skillet over high heat until a bead of water vaporizes within 1 to 2 seconds of contact. Swirl in the oil, add garlic and shallots, then, using a metal spatula, stir-fry 10 seconds or until aromatics are fragrant. Push aromatics to the sides of the wok, carefully add shrimp, and spread them evenly in one layer in the wok. Cook undisturbed 30 seconds, letting the shrimp begin to sear. Then stir-fry 1 minute or until shrimp just begins to turn orange. Sprinkle on the salt and stir-fry 1 to 2 minutes or until shrimp turn completely orange. Cover and allow to stand 30 seconds off heat. Uncover and stir-fry a few seconds or until shrimp are just cooked through.

From “Stir-Frying to the Sky’s Edge” by Grace Young 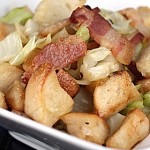 Another Recipe From Grace Young: Stir-Fried Bagels with Cabbage and Bacon (Yes, bagels!) 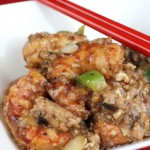 Another Shrimp Stir-Fry Recipe: My Mom’s Prawns with Pork and Black Bean Sauce