Curl Up with Dijon and Cognac Beef Stew 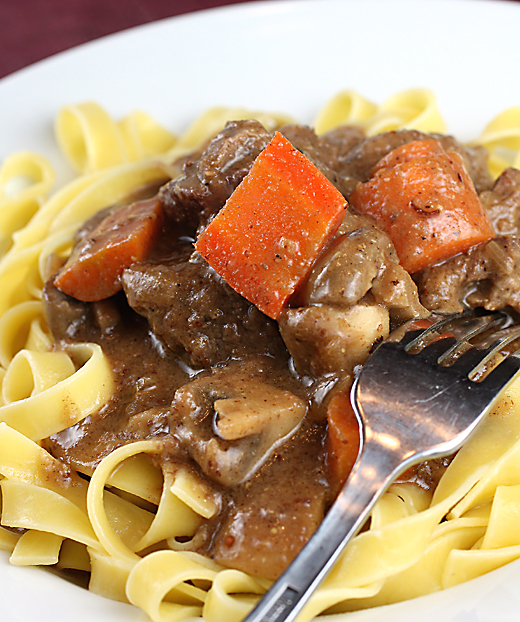 My husband can be fickle.

He’ll devour a dish one night, then balk at eating the leftovers the next night.

Not with this stew.

When I announced the next evening that dinner was the remains of the  “Dijon and Cognac Beef Stew” over buttered egg noodles we had the night before, he fairly yelped with glee, smacking his lips in anticipation all over again.

This stew will do that to you.

It’s from “The Essential New York Times Cookbook” (W.W. Norton & Co.) by Amanda Hesser, a doorstop of a book with more than 1,000 recipes in it from the past 150 years, of which I recently received a review copy.

The stew, which first graced the pages of the newspaper in 2001,  has got cognac, red wine, butter and bacon fat in it, not to mention a big ol’ heap of mustard. What’s not to like?

Bacon or salt pork gets rendered in a big pot. The recipe says to fish out the pork and discard it. But I used the crispy bacon bits to liven up a green salad instead. You only need the glorious fat in the bottom of the pan for the rest of this stew.

In go boneless beef chuck cubes to sear. Then, deglaze the pan with Cognac before adding broth, 1/2 cup of Dijon mustard and a tablespoon of whole-grain mustard. Cook until the meat turns tender, then add sliced carrots and sauteed mushrooms, before finishing with a little red wine and still more whole-grain mustard.

All that mustard gives the sauce a velvety heft and a piquant back note. It’s almost like a beef stroganoff, in which the sour cream is replaced with perky mustard instead.

A mound of buttered egg noodles is a natural to ladle this hearty, lusty stew over. But fluffy rice also would be nice.

This stew deserves a glass of full-bodied red wine alongside.

And it most certainly merits enjoying for more than one night.

4 tablespoons unsalted butter, or as needed

1/2 cup Cognac or other brandy

If necessary, add 2 tablespoons butter to the pot to augment the fat and increase the heat to medium-high. Dust beef cubes with flour and season with salt and pepper. Shake off any excess flour and place half the cubes in the pot. Cook until well browned, almost crusty, on all sides, then transfer to the bowl with the onions. Repeat with the remaining beef.

Add Cognac to pot, and cook, stirring, until the bottom is deglazed and crust comes loose. Add the broth, Dijon mustard, and 1 tablespoon Pommery mustard and whisk to blend, then return the meat and onion mixture to the pot. Lower the heat, partially cover the pot, and simmer gently until the meat is very tender, about 1 1/2 hours.

Add carrots and continue simmering for 30 minutes or until tender.

Meanwhile, melt 2 tablespoons butter in a medium skillet over medium-high heat, and saute the mushrooms until browned and tender.

Stir mushrooms into the stew, along with the remaining 3 tablespoons Pommery mustard and the red wine. Simmer for 5 minutes, then taste and adjust the seasoning. Serve over buttered noodles.

Note: This stew freezes well. Thaw in the refrigerator, then reheat, covered in a 250-degree oven.

— From “The Essential New York Times Cookbook” by Amanda Hesser 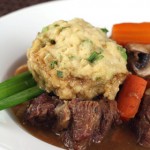 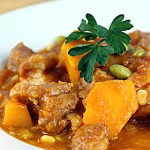 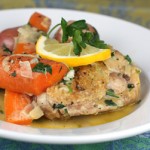 And: Chicken in Riesling 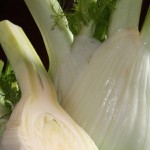 And: Braised Pork with Orange and Fennel 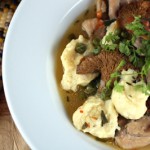