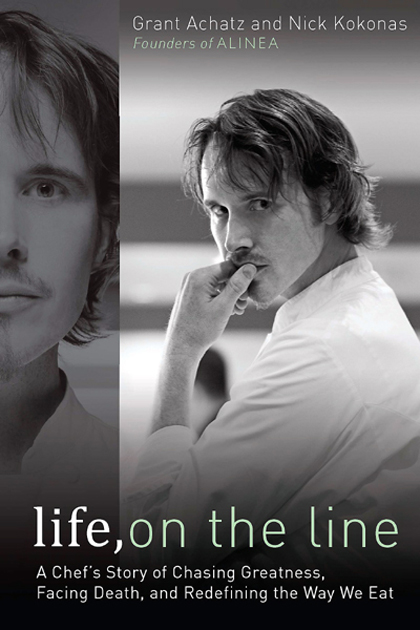 Next is the prophetic name of the new restaurant expected to open this spring in Chicago by acclaimed chef, Grant Achatz, of the James Beard Award-winning, Michelin three-starred Alinea.

Like his first Chicago ground-breaking sanctum to molecular gastronomy, Next also will challenge and provoke the defiinition of what a restaurant is by completely reinventing itself every three months with period-themed menus and decor, along with an audacious non-refundable ticketing system as the only option to snag a table there.

It’s bold. It’s daring. And it’s a miracle that it’s even possible.

After all, if you know Achatz’s story, you already realize that the odds were stacked against him far higher than the city’s iconic Sears Tower when he was diagnosed with tongue cancer four years ago at age 32. By the time it was caught, his squamous cell carcinoma was at stage 4. There is no stage 5.

Doctors told this chef and father of two young sons that he would die a painful death in mere months if he didn’t undergo radical surgery to remove his tongue and part of his jaw, which would leave him disfigured, unable to talk and without the ability to taste. Despite conventional thinking, Achatz decided to gamble on an alternative, experimental and brutal treatment of intensive, targeted chemotherapy and radiation that ended up saving his life.

His stunning story is recounted in his new memoir, “Life, on the Line: A Chef’s Story of Chasing Greatness, Facing Death, and Redefining the Way We Eat’’ (Penguin), which debuts March 3.

You can meet Achatz on March 17 in San Francisco, when he and his business partner and co-writer, Nick Kokonas will be signing copies of the book at 12:30 p.m. at Book Passage in the Ferry Building. Later that day, 5 p.m. to 6 p.m., they will also sign books at Omnivore in San Francisco. The talk they will hold afterward at Omnivore sold out days after it was announced.

Last week, I had a chance to talk by phone with Achatz on what it was like to reveal so much about himself in this book; his relationship with rival Chicago chef, Charlie Trotter; and his feelings on who might portray him in the feature film-version of his memoir, which may be directed, surprisingly, by David Dobkin of “Wedding Crashers” fame.

Q: Has your sense of taste returned fully now?

A: I believe so. Taste is a funny thing, though. If you go to an ophthalmologist, they can tell if your eyes aren’t working correctly. They can give you a prescription for glasses or contacts. Same with hearing. But taste is something you can’t measure.

To me, at least in my memory, my tasting ability is the same as it was pre-cancer. I would even argue that certain aspects resulting from the treatment helped me to taste better now. It doesn’t have to do with the physiology of it. It’s the mental thing. It’s learning what taste is and how it’s composed.

My ability to taste came back in pieces. I was down to under 130 pounds and I never used to drink coffee with sugar in it. But I did then to get calories. I’d put three giant tablespoons of sugar in my coffee. One day, I took a sip and I could actually taste the sugar. Up to that point, I couldn’t taste sweet at all. Then, three months later, I’d drink my coffee and say, ‘Damn, this coffee tastes bitter.’ And so, I could taste bitterness again. Having tastes come back in stages like that really teaches you about how they all relate to one another as they come together on the palate and function in relation to one another. It was a very informative process. I wouldn’t recommend it, though. (laughs) But it works for me. 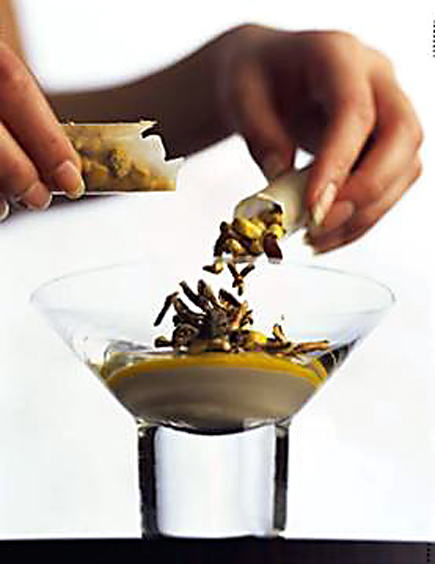 Q: How did your fight against cancer change you as a person and as a chef? Do you look at life differently now?

A: It does make you look at life differently. You have to make fundamental decisions. Different people handle things differently. Some people might say, ‘I need to reprioritize my life, spend more time with loved ones, and work less.’ When you face mortality, you undergo a self-evaluation of your life. I’m pretty happy with my life. I didn’t feel like I had to change anything. How lucky am I to get to go to work for 14-16 hours a day to do something I love? I probably do focus more now on my two young boys. And I make a more time now for relatives, and for my girlfriend. But on a whole, I really didn’t change anything.

I don’t think it made me more driven. My trajectory pre-cancer was such that I think I would be exactly what I am now even if the cancer had never happened.

A: I had maybe a couple moments of that. But it was not a consistent feeling.

In the book, I reveal how I was sitting on the couch with my mother and she started to cry and I started to cry. She asked me what was wrong. And I thought, ‘What’s wrong??!’ I guess you could call it self-pity. I guess it was then that I thought it was unfair, that I was too young for all of this, that this was supposed to happen to old people. There was a sense of helplessness. That was my low point. I did nothing to deserve this. I wasn’t a chain-smoker; I wasn’t an alcoholic. So, I did ask myself, ‘Why me?’ It was probably only twice. That time with my mother and then when I was sitting with Heather (Sperling, his girlfriend who is the editor of the Tasting Table Chicago e-newsletter) after the diagnosis. I felt bad for her and for my boys.

Q: In the book, you state that your experience in working at the French Laundry in Yountville as a young cook essentially helped save your life. Can you expound on that?

A: Working there taught me lessons beyond cooking. Like about being tenacious, intense and aggressive. This didn’t make the book, but I remember being in the kitchen there and Thomas (Keller) turning to ask me a question about giving each person at a table a different lobster preparation at the same time. He knew it was seemingly impossible. But he also knew I couldn’t say ‘No.’

My personality was forming at a very young age there. I was 22. Thomas was always the first one to arrive at the restaurant and the last one to leave every day. When you are faced with a diagnosis of cancer and they tell you the treatments that are so grim, you draw parallels in cooking. You look down the barrel of that cancer treatment, and you push through. You just have to push through adversity like you do every night on the line. It’s ingrained in you at a young age. Thomas taught us never to say ‘No.’ It’s a powerful lesson.

Q: Even though there are grave moments in this book, there are also ones of great levity. At the French Laundry, which is understandably a tough and demanding place to work, the ultimate sin is to commit any mistake that might compromise the quality of the food. One hectic morning, you’ve just pitted olives and are about to puree them in the Robot Coupe, when another cook, DJ, stops you and bets you that you’ve inadvertently left a pit in there somewhere. If he wins, you have to fish out the pit and carry it in your wallet, where it has to stay in case he ever asks to see it. Sure enough, you turn on the machine and hear the unmistakable sound of the pit hitting the blades. I have to ask: Do you still carry that olive pit in your wallet?

Q: Obviously, Trotter doesn’t come off glowingly in this book. Has he ever eaten at Alinea? What is your relationship with him like now?

A: He’s never been to Alinea. He’s never eaten my food — period. He didn’t ever eat it at Trio, either.

When people read the book, they’re divided on how I portray him. People think he must not be happy about it. My intent was only to articulate events that had happened that would make the reader think.

His passion to make his restaurant the best, his all-or-nothing mentality — I resented that as a young cook. But in some other ways, I ended up adapting some of that mentality and using it at Alinea. I try to draw parallels for what it takes to reach perfection.

He and I don’t socialize. It’s a professional relationship. He hasn’t said anything about the book. Who knows if he’s read it? Probably not. 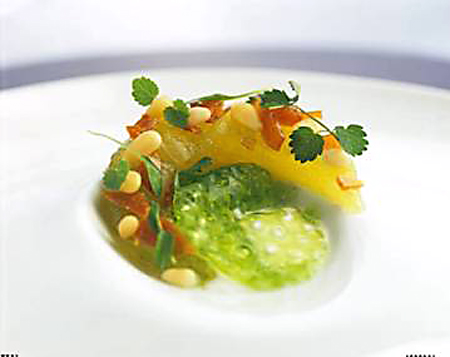 Q: You had no ghostwriter for this book. Was it difficult for you to write it? Or cathartic?

A: It was both difficult and easy. I hadn’t gone to college. I went to culinary school, where they don’t teach stuff like that. I didn’t read that much, either. I was too busy cooking.

Nick jokes that I don’t even know pop culture. He was talking about a show once and a well-known actor. I didn’t know who this person was.

The writing part was difficult in the beginning. Nick would write a section and he’d email it to me. I’d read it, then we’d edit each other. We emailed back and forth. I adapted to it more after reading what he had wrote.

In my life, I never had time to look back. I had to always look straight down the road and get there as fast as I could. There never was time for self-reflection. The book was therapeutic in that way that it gave me the chance to look back at the choices I had made. 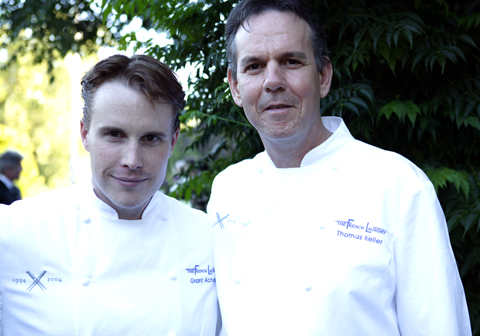 Q: I hear that there may be a feature film made from the book and that it may star Leonardo DiCaprio. So you’ve heard of him, right?

A: (laughs) I do know who he is. I’ve heard a lot of names. Will it be him? Will it be Ethan Hawke? Or the ‘Spiderman’ guy, Tobey Maguire? It’s not for me to decide. Whoever it is, what’s important is that they play the role as close as possible.

I’m sure whoever it is also will have to get a crash course in cooking, in how to pace yourself in the kitchen, the lingo of the cook, and how to hold a chef’s knife.

Q: Now, the real question — who would play your mentor, Keller, whom you also named your youngest son after?

A: That’s a tough one. Hmm…It would be cool if he’d play himself, don’t you think?

More: Read my review of Grant Achatz’s “Life, on the Line” at ProjectFoodie.com