Take Five with Bill Corbett, the Pastry Chef Who Dreamed of Being a Heavy Metal Musician 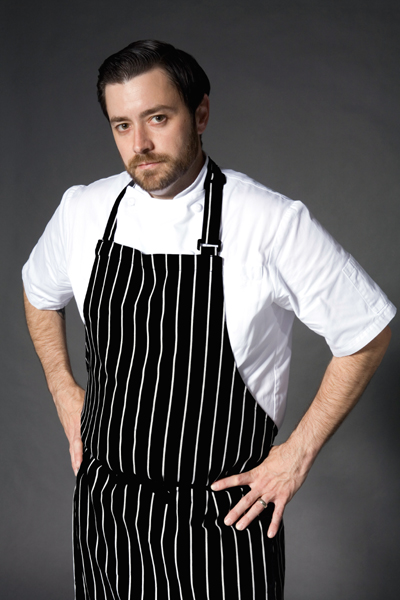 If you think Executive Pastry Chef Bill Corbett of Absinthe Brasserie & Bar in San Francisco has always dreamed of making desserts, you’d be wrong. If you think he enjoys indulging in dessert on his days off, you’d be wrong about that, too. And if you think he can’t get enough of deep, dark chocolate, well, you’d be striking out three for three.

Despite those contrarian characteristics, Corbett, a native of Waterloo, Canada, has done all right for himself. Indeed, the 36-year-old, who probably would have been a heavy metal musician if he’d had his druthers, has made quite the name for himself, having worked at such esteemed establishments as WD-50 in New York, Michael Mina restaurant in San Francisco, and Coi, also in San Francisco.

Recently, I had a chance to sit down with Corbett at Absinthe, where he started in January to oversee the sweets there, as well as at Arlequin Café and Comstock Saloon. I also had a chance to try a couple of his elegant desserts: an Earl Grey pavlova with vivid mint ice cream, and a modern take on German chocolate cake with coconut foam that totally changed my mind about the traditionally too-gooey version. 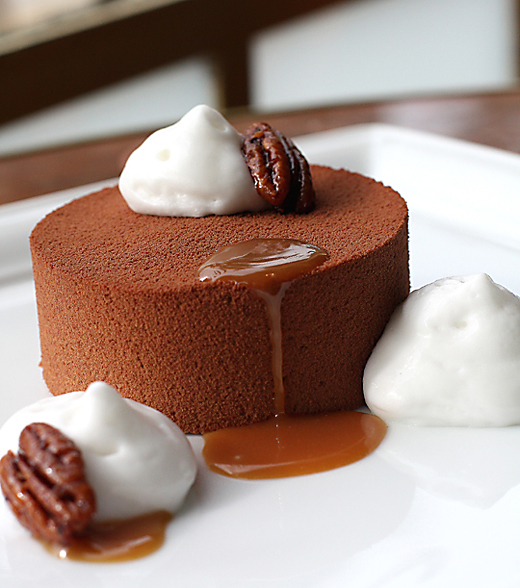 Q: What brought you to the United States?

A: I didn’t have a clue what I wanted to do for a living when I was a kid. I was into music, especially punk music. I worked in a video store in Canada. When it closed, a friend got a job as a dishwasher at a restaurant. So, I did, too.

I’d still love to be in a band now. If I could be in a heavy metal band, I’d do it in a heart beat. But I’d have to set aside time to actually learn to play an instrument. (laughs)

I moved to Florida from Canada, because I had friends in bands there. I had no work visa and only $800 in my pocket. So, I worked at a café in Tampa and was paid under the table. It was called the 7th Heaven Psychic Café. We served salads and sandwiches, and there were psychic readings.

Florida was where I met my wife, too. I ended up moving to Toronto for a year to work in an all-you-can-eat buffet place. But then I moved to New York because my wife was going to school there. She’s a graphic artist.

Q: Why did you decide to focus on the sweet side, rather than the savory one?

A: Forced into it is probably the wrong way to put it. (laughs) I wanted to cook. I was trying to get into culinary school in the United States. I could work here, but I couldn’t get loans here.

I was working at a bar in Brooklyn when I was 28. One day, a woman told me that Lincoln Carson, who is now the corporate pastry chef for Michael Mina, had a place and that I should go do a stage there. I barely knew what ‘stage’ meant. The fact was that nobody wanted to hire me because I had no culinary school training and no New York experience.

I had worked in low-level restaurants up to then, not knowing what I wanted to do. I liked the atmosphere, but I knew I wasn’t really learning anything. There were days that I didn’t want to go to work. It wasn’t cooking. There wasn’t love in it.

A: I hate that term. It discredits the people who helped me learn along the way. I had a lot of guidance. Lincoln was the biggest factor. If I hadn’t met him, I’m not sure I’d be where I am today. He’s been my mentor, even after I left the Mina Group.

Q: What did you learn most from the people you worked with along the way?

A: Lincoln taught me the rules. Sam Mason at WD-50 expanded my mind by encouraging me to break the rules. My experience at WD-50 taught me how to get flavors in where they don’t belong.

Watching Wylie Dufresne run his kitchen taught me a lot, too. He organizes it so that it’s easy to work there. Rather than just have one chinoise for the whole kitchen, he encourages you to tell him if another one is needed and then he’ll buy it, rather than having cooks running around, looking for the only one there is in the kitchen.

At Coi, I learned to focus on what’s around us, all the great ingredients in the Bay Area. I came out of it wanting to do make more things in-house. Like here at Absinthe, we’re a busy restaurant, but we make our own yogurt. That way, we have our hand in every piece of the puzzle. We make the yogurt twice a week and it’s fresher than anything you can buy.

Q: You never wish you were back on the savory side of the kitchen?

A: I like to cook. I really enjoy it. But there’s something about pastry that I innately understand. Part of it is the precision and how you can control all the variables. It’s also how you almost know the outcome of something even before it’s done.

Q: Are you the only one in your family in this industry?

A: Yes, although, my younger sister is getting into baking. She’s in Toronto. She’ll call me for recipes or advice. She tackled macarons recently.

We weren’t a big foodie house when I was growing up. My parents weren’t good cooks. My Dad will say, ‘You need all this fancy equipment? Why can’t you just make a bologna sandwich?’

My parents have never even eaten at my restaurants. They’ve seen photos. But they’ve never really fully experienced what I make. Though, I did make my sister’s wedding cake, and they did try that.

Q: What was one of the craziest desserts you made at WD-50?

A: Sam would push it. Working for Sam was not doing crazy for the sake of being crazy, though. Same with Wylie. Wylie is all about giving the guest something to relate to.

We made this black olive clafoutis. We treated the olives as we would cherries. It was a great dish with almond ice cream and dried cherry streusel.

Another time, we did mustard ice cream with dried pineapple.

Q: Do you still use a lot of the molecular gastronomy techniques you learned at WD-50?

A: I use a lot of modern techniques. I cook sous-vide. I think Johnny Iuzzini (executive pastry chef of Jean Georges in New York), whom I did a stage with, had the best way of thinking about molecular gastronomy. He said, ‘Are you improving what you can already do? If not, then it’s just a gimmick.’ 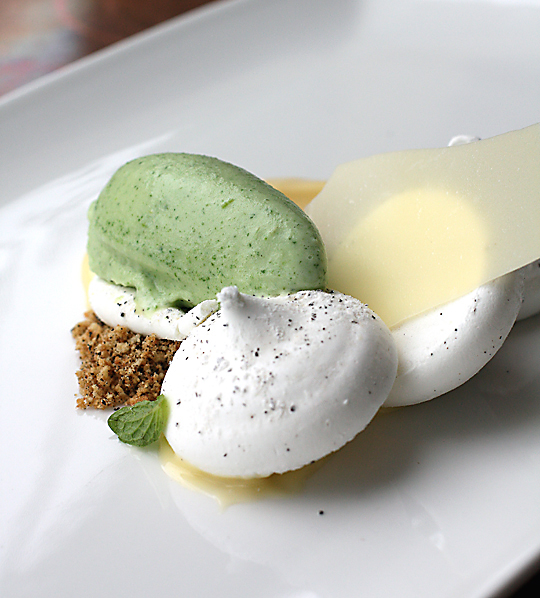 Q: Describe your style of desserts.

A: I do modern desserts, but I really want to connect to the guests. If a guest doesn’t love it, I’m doing something wrong. I try to touch on nostalgia a lot.

Q: What’s your favorite ingredient to work with?

A: Milk chocolate. I use it a lot. I know it’s not the coolest ingredient. But it has amazing creaminess. I think a good milk chocolate is just as sophisticated as dark chocolate.

Q: Any ingredient that you hate?

A: I’m not super fond of ripe papaya. This sounds horrible, but it reminds me of vomit.

Q: Do you use absinthe in any of the desserts at Absinthe?

A: I haven’t, but I’m not opposed to it. I want to play around with it.

Q: Your favorite dessert as a kid?

A: I’d never turn down cheesecake. I also was into candy bars, especially the Cadbury Wunderbar, which is filled with creamy peanut butter. I also liked these things called butter tarts. I really don’t even know what they are. Maybe they’re kind of like chess pie.

Q: What’s your favorite dessert to eat as an adult?

A: I don’t eat dessert that much because I taste all day. When I go out, I usually crave salt. If I know there’s a pastry chef at a restaurant when I go out, I’ll probably order dessert then, like if I’m at Michael Mina, which has some of the best desserts around.

I also like Will Werner’s espresso milk jam. It’s amazing. It’s like cajeta. He sells it in jars. He brought me a jar a week ago. I just want to eat it by the spoonful.

Q: Is it dangerous for your wife to be married to a pastry chef?

A: I don’t necessarily bake at home and I don’t bring stuff home often. She also doesn’t like nuts or chocolate. But she is always happy when I bring cinnamon rolls home.

A: I did. I felt bad for them because they couldn’t have their recipes with them. I have a lot of recipes in my head just because I’ve made them so many times, such as panna cotta and ice cream. I really felt for them, and I’m glad I wasn’t having to do those things.

Q: You’d never want to compete on the show?

A: No. I have a fear of being out of control, and there, you can’t control the editing or anything. At this stage in my career, I don’t want that.

Q: If your personality could best be described by a dessert, which one would it be?

A: I think of myself as an unrefined person in a very refined world. I think the dessert that is most like me would have to be something broken apart or deconstructed, something where you touch it and it falls apart.

Maybe a nice cylinder of chocolate mousse with layers that crumble and have surprise. From the outside, it looks neat and tidy. But on the inside it’s chocolate – really dark chocolate – because of the type of music and humor that I like. 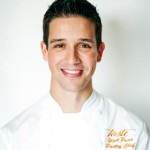 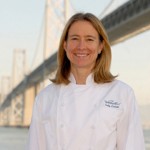