Take Five with Chef Robert Sapirman, on His Big Plans for Citrus Restaurant in Santana Row 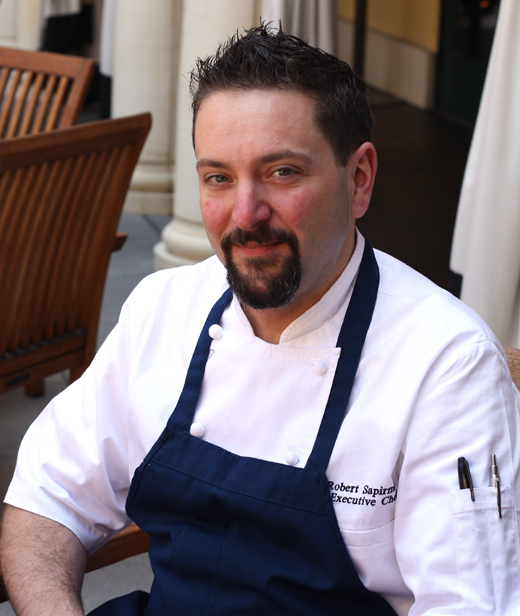 Chef Robert Sapirman has circled the Bay Area in the past year, only to wind up not too far from where he once was.

Bay Area foodies may remember him as the long-time head chef of Parcel 104 in Santa Clara. He departed that upscale restaurant in the Marriott Hotel to open Vesu in Walnut Creek, only to see that restaurant shutter a year later.

Now, for nearly six months, he’s been the executive chef of Citrus in the Hotel Valencia in San Jose’s Santana Row, just a few miles from – you guessed it — Parcel 104. The eight-year-old Hotel Valencia, known for years far more for its lively bar scene than its restaurant food, is in for a transformation. By the end of the year, not only will the lobby and other public areas of the hotel get a freshened look, but Citrus will debut a new concept. Sapirman, long known for his commitment to stellar ingredients, was brought in specifically to try to put Citrus on the map for discriminating foodies. Under his direction, expect the restaurant’s current steakhouse concept to give way to a more dynamic one of global tapas.

Recently, I had a chance to sit down with the 37-year-old, New Jersey-born and Fort Lauderdale-reared chef who now oversees the food for not only for Citrus, VBar, and Cielo wine bar, but banquets and room service for the 212-room hotel. 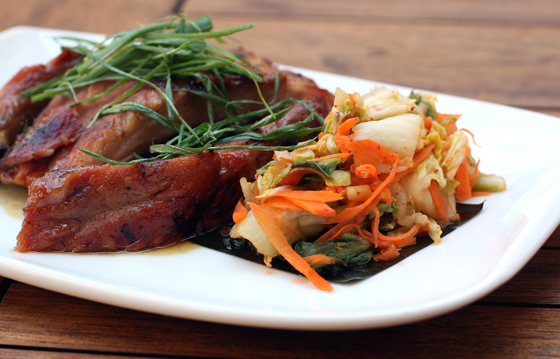 Q: Is your food here similar to what you were cooking at Parcel 104?

A: It’s similar in that it’s ingredient-driven. I try to seek out the best ingredients that I can. My passion now is global tapas. I did a little of that at lunch at Parcel 104 before I left. Vesu also was a great platform for that.

Q: Are you hoping to change the perception that the Hotel Valencia is all about the bar scene?

A: Absolutely. We have a handicap in Citrus in that we’re surrounded by other restaurants. We need to make you come up to the second floor here. Plus, the perception is that restaurants in hotels are not good. I know we struggled with that at the Marriott, too.

I hope to fill this 62-seat restaurant every night and to get people up here to love my food. That’s what every chef wants, right? I hope to make the restaurant as busy as the hotel is, so that when people call for a reservation, there won’t be any.

Q: How will you differentiate yourself from the other restaurants at Santana Row?

A: The quality of the products I bring in will be different. There are a lot of chains here. We’re more of a craft-driven restaurant. This is the only outlet.

I just went to Spain and I’ll be using some olive oils and vinegars from there, as well as Iberico ham. People in this country think canned seafood is mediocre here. But Spain is home to some of the best canned seafood you’ll ever have. They take the freshest, best seafood and can it to preserve it. I hope to showcase some of that, too.

Q: What happened with Vesu?

A: We were getting busy there, but there wasn’t enough financing at the beginning. We knew it would just run out. It’s a shame because it was a beautiful restaurant.

Q: Do you feel a fun rivalry now with your old crew at Parcel 104 since you’re so close by now?

A: I look at Parcel 104 as my child. I love that place so much. I still keep in touch with the people there. In fact, some of them are going camping with me soon.

There’s always some rivalry with chefs. I’ve got to do great desserts here in case Carlos (Sanchez, executive pastry chef of Parcel 104) comes by. (laughs) Q: What made you want to be a chef?

A: I wish I had one of those stories about cooking with my Mom since I was a kid. But it wasn’t like that at all. I was going to school to be a chiropractor. I was also working at a pizza place. A guy I was working with was going to go to Johnson & Wales University for its culinary program. He tried to talk me into doing that, too, and I finally decided to check it out.

Half way through my second class, I thought, ‘This was fate.’ I loved everything about it.

Q: So if you weren’t a chef, you’d be a chiropractor?

A: No way. I really wanted to be a drummer, but I realized I had no rhythm. So, if I weren’t a chef, I’d be a DJ. I love music as much as food. I love to change people’s moods with music in the same way that I like to do so with food. Food brings you back to favorite memories. Music does that, too.

Q: What’s your favorite ingredient to work with?

A: Can I say pork? It’s so versatile. You can really add as much flavor as you want because it’s like the tofu of meat – it soaks up everything.

A: Cinnamon – only because I’m highly allergic to it. It’s like I have to put on a haz-mat suit whenever I work with it in the kitchen. I can’t eat it or touch it – my skin really reacts to it.

In fact, when I was still at Parcel 104, Carlos and I were once arguing about something, and he smashed a jar of cinnamon.

Q: Oh my god! He didn’t know you were allergic?

A: No. My skin just erupted.

Q: On your days off, what do you like to eat?

A: I like to eat at small, ethnic restaurants. I love Indian food. I love Vietnamese food. If I’m not eating that, I’m eating pints of ice cream. (laughs) If I get my hands on a pint of Ben & Jerry’s or Haagen-Dazs, someone has to pry it out of my hands.

Q: Do you cook at home on your days off?

A: Yes, Sunday and Mondays are usually my days off. I will go to the Mountain View farmers market on Sundays and just let what I see there inspire me.

I make breakfast a lot, too, for my wife (she’s Vietnamese-American). I make things like congee with eggs and shallots for breakfast.

Q: So, my husband can be brutally honest when I’m testing out new recipes. With you being a professional chef, I’m sure you never get anything but praise from your wife?

A: (laughs) Are you kidding? My wife is OK with being honest. She’s tough on me. In fact, when I made congee, the first time was here at Citrus for some Cisco folks visiting from China. They loved it. So, I got all inspired to make it for my wife. But she said mine was not as good as her mother’s! She even made her own congee to prove it. I’ve never made it again since. 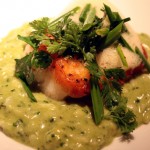