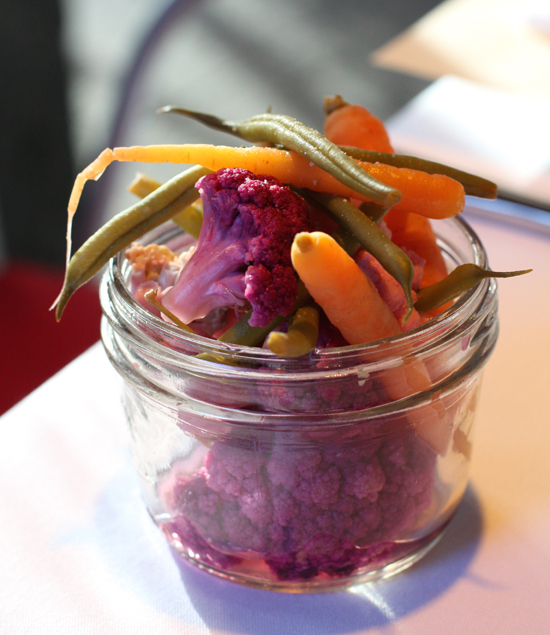 It’s easy to see why Chef Mitchell Rosenthal would want to throw a party to celebrate his upcoming new cookbook.

After all, the 272-page book took him two years of hard work to put together — all the while running three very successful restaurants in San Francisco.

Last week, he hosted a summer feast to end all summer feasts for a small group of food writers, including yours truly, at his Town Hall establishment. It was a huge spread with all the dishes featured from his new cookbook, “Cooking My Way Back Home: Recipes From San Francisco’s Town Hall, Anchor & Hope, and Salt House” (Ten Speed Press). The cookbook, which he wrote with Jon Pult, will debut this fall. 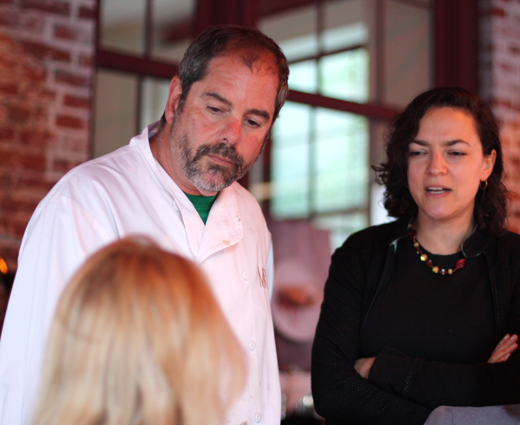 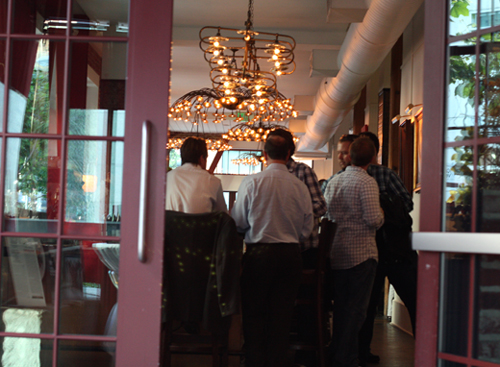 The cookbook even features a rare forward by celeb Chef Wolfgang Puck, whom Rosenthal worked on and off with for 18 years at Postrio in San Francisco, Granita in Malibu and Coco Pazza in New York. The recipes in the book reflect the arc of his career: New Orleans specialties from his time cooking with Chef Paul Prudhomme, whom he called every Friday for six months straight until he snagged an internship at K. Paul’s; a deft array of global cuisines from cooking at the Four Seasons in New York; and classical techniques from Le Cirque in New York.

Rosenthal and his wife, who has worked as a chef at the Liberty Cafe and Zuni Cafe, both in San Francisco, tested the recipes in their home kitchen to insure that home cooks would have no trouble making them. 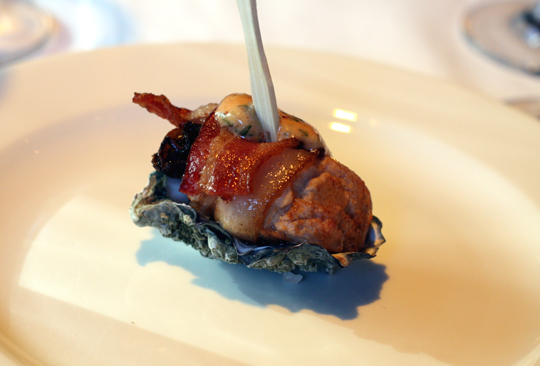 Dinner began with nibbles of plump “Angels on Horseback” — plump oysters wrapped in bacon and drizzled with remoulade sauce.

The table was set with old-fashioned, glass canning jars filled with a rainbow of pickled vegetables with coriander, as well as sticky, crunchy mixed nuts doused in fragrant truffle honey. 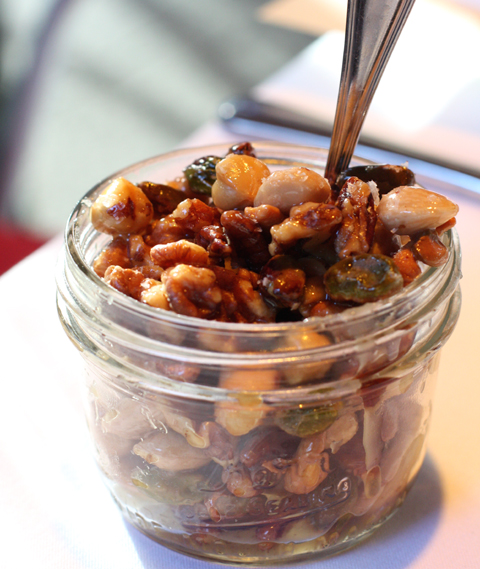 The food, served family-style at one large, long table, also included brioche lobster rolls (as rich as it sounds); a buttery tomato basil tart with St. George cheese; two-bite country biscuits stuffed with ham and sweet-spicy red pepper jelly; and haricot verts that were a meal unto themselves, what with their creamy harissa vinaigrette, spiced almonds and generous slices of Serrano ham draped over the top. 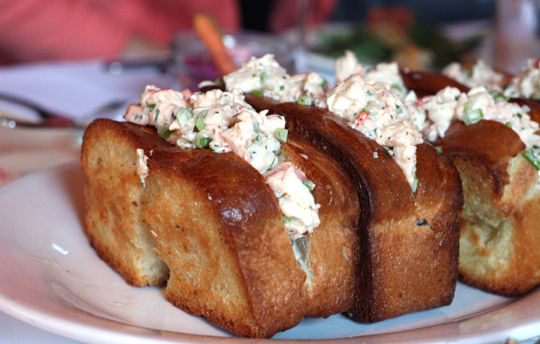 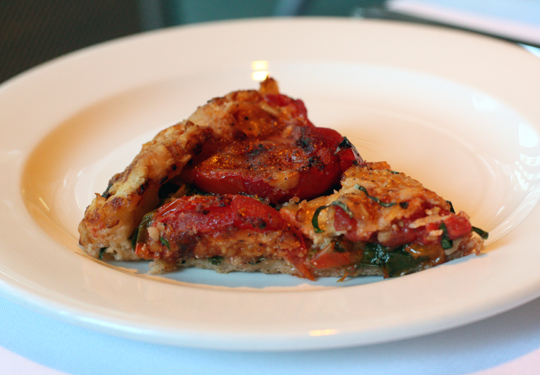 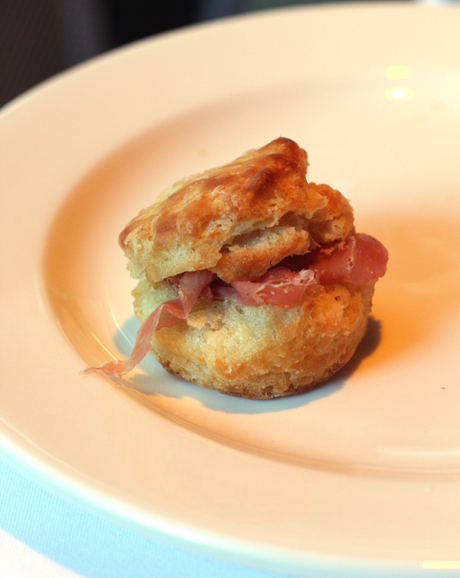 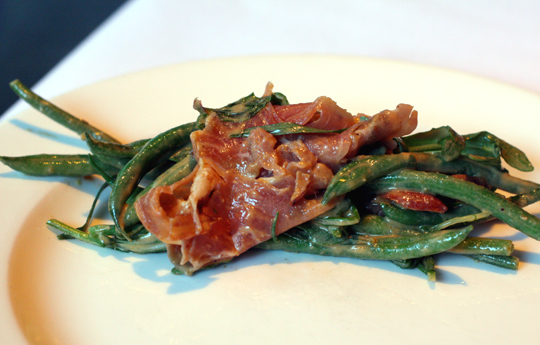 But wait; there was more — a lot more. Baskets of moist, tender, almost cake-like jalapeno cornbread; and bowls of creamy corn maque choux and smashed potatoes with coffee-laced country gravy. 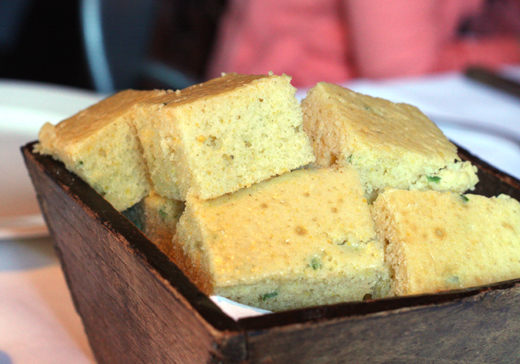 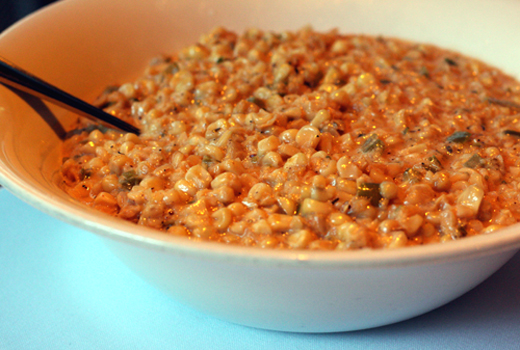 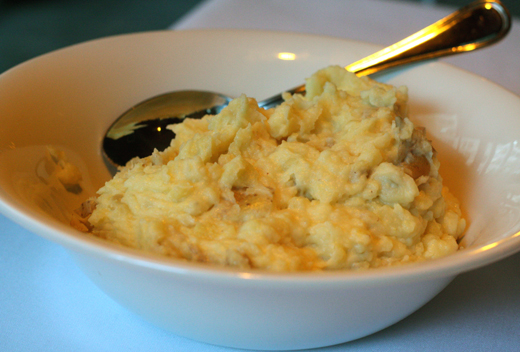 Alongside were platters heaped with garlic-studded, hickory smoked prime rib; apple-glazed St. Louis ribs with spicy bourbon barbecue sauce; and crunchy fried chicken, based on a recipe by Puck’s mother. The chicken is injected with clarified butter and Tabasco, then soaked in buttermilk to make it super moist and juicy. Then, it’s fried at a relatively low temperature — 310 degrees — which is why Rosenthal calls it “slow cooked.” He says the key to preventing the chicken absorbing too much oil at that temperature is to not fry too many pieces together at one time. 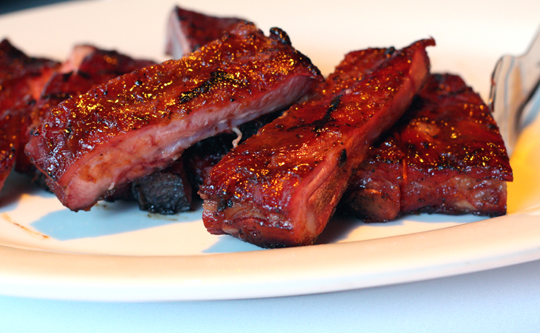 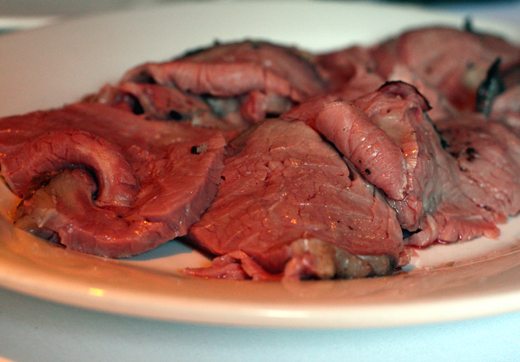 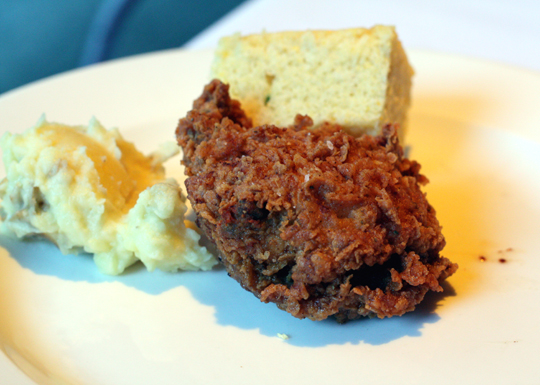 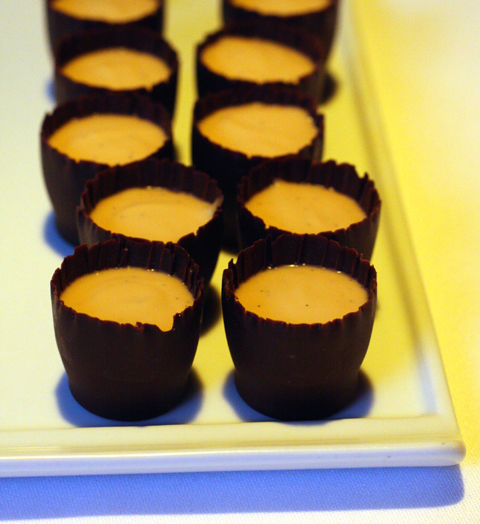 If all this has whet your appetite for the cookbook, here’s a simple recipe to tide you over until the cookbook comes out in the fall. You’ll no doubt want to smear this red pepper jelly on anything and everything. I haven’t yet had a chance to try making this myself. But it sure tasted mighty fine spread on biscuits and ham at last week’s Town Hall soiree.

To make the jelly, halve all of the peppers lengthwise and remove and discard the stem, seeds, and membranes. Chop into 1-inch pieces. Working in batches, add peppers to a food processor and pulse until finely chopped. Transfer peppers to a heavy-bottomed pot and add sugar, vinegar and chile flakes.

Have ready a candy thermometer or place 2 or 3 small saucers in the freezer. Place the pot over high heat and bring to a boil, stirring to dissolve sugar. Lower heat to medium high, add pectin, and cook, stirring occasionally, until jelly registers 220 degrees on a candy thermometer (about 10 minutes). Alternatively, remove pot from heat and drop a small spoonful of the jelly onto a cold saucer, let stand for 1 minute, then push the edge of the jelly with fingertip; if the top of the jelly wrinkles, it is ready. It it doesn’t, return the pot to the heat, cook for 2 to 3 more minutes, and test again.

Enjoy with biscuits and ham. Mitchell Rosenthal and his wife also use it throughout the day, spreading it on an English muffin in the morning, pairing it with sausage in a sandwich at midday, and stirring it into a sauce for dinner.

From “Cooking My Way Back Home” (Ten Speed, Fall 2011) by Mitchell Rosenthal with Jon Pult 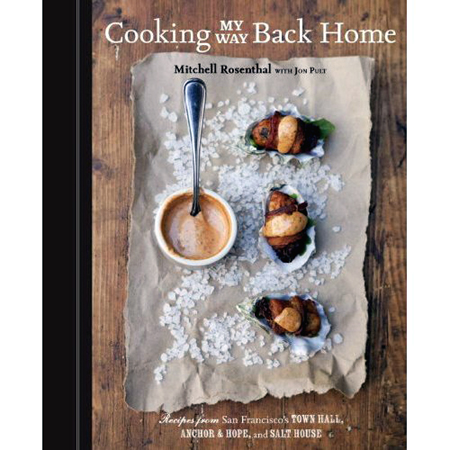