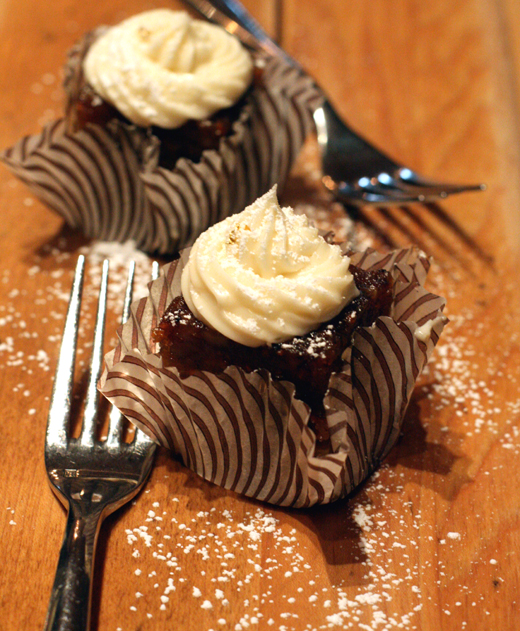 I always loved the camaraderie and goofball spirit of the ol’ “Cheers” bar on TV.

But Entoteca La Storia in Los Gatos is the kind of bar I really want to spend time in.

And I’m glad I finally got a chance to experience it when I was invited to be a guest there recently.

The wine bar and wine shop opened in a strip mall on N. Santa Cruz Avenue in 2010. Not unlike Sam Malone in “Cheers,” Enoteca La Storia was founded by two guys who have a knack for welcoming folks to their establishment with warmth and humor.

Co-Owner Joe Cannistraci, a New York native who moved to Aptos more than 20 years ago, has a background in construction and contracting. But a childhood friend who grew up to become an accomplished New York chef and restaurateur got him so interested in wine that Cannistraci ended up taking a part-time job at the Wine Club in Santa Clara. Cannistraci, of Sicilian heritage, worked his way up to assistant manager and the store’s Italian wine buyer before leaving to help found the Vintage Wine Merchants in San Jose’s Santana Row.

He later met his fellow Co-Proprietor Michael Guerra, a third-generation San Jose native of Calabrese heritage, who for years was a mental health clinician, before deciding to pursue a passion for wine. Guerra worked at the Wine Club in Santa Clara, too, before also joining the team at Vintage Wine Merchants. 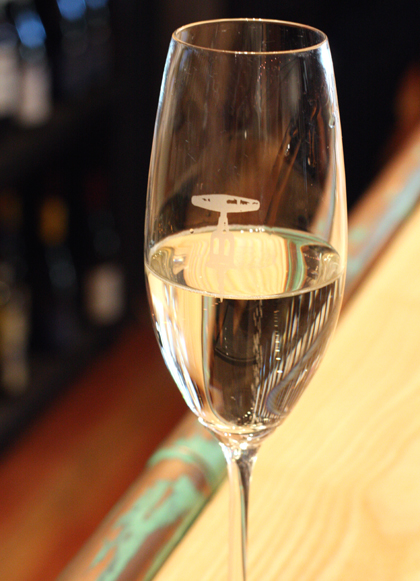 Cannistraci’s construction skills came in handy when he opened Enoteca La Storia. He designed the industrial-meets-vintage interior, which has an inviting, long, wrap-around bar in the main room along with high tables for more intimate seating near railings old pipes, their worn patina adding a lived-in look.

Off to the side is a small room with tables if you want a quieter setting. A massive butcher block table, reclaimed from the old San Jose grocery store that Guerra’s grandfather once ran, now serves as the host stand complete with register. 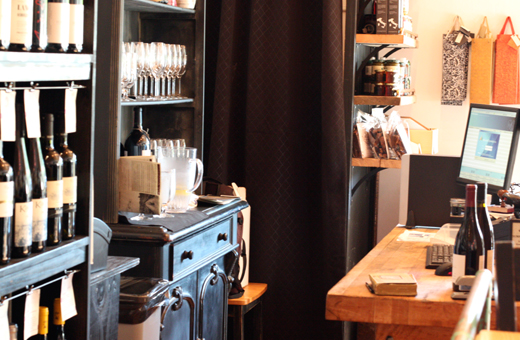 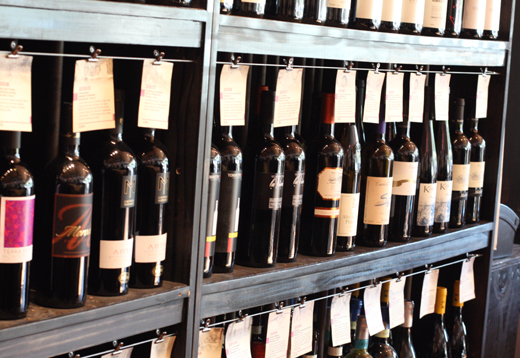 Along one side of the dining room are shelves holding an array of wine bottles — from California, as well as France, Spain, Germany and Italy — and all are for sale. Choose a bottle to take home, and pay only $15 over the listed price that’s on the wine bar menu. For better savings, join Enoteca’s wine club. There are various levels of membership, starting at $29.95 a month, which will allot you two bottles of wine a month.

Take a seat at the bar to enjoy wines by the taste, glass or bottle, as well as focused flights. A new front patio soon will open too, to allow for al fresco sipping on warm evenings.

Enoteca offers plenty of food options to nosh alongside — which is pretty incredible, considering it has no real kitchen. Unless you count a fridge, a sink and a small, counter-top convection oven.

The offerings may be limited to crostinis, cured meats, cheeses, salads and sandwiches, but they more than proved a satisfying meal. 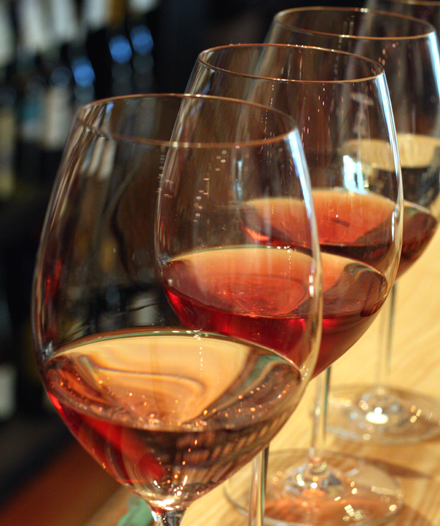 We started with glasses of La Marca Prosecco ($4) from Italy, which were spritzy and tasted of honeysuckle and apples. I love rosés in summer and couldn’t pass up the flight ($14) of the 2010 Muga Rosado from Rioja, 2010 Cantele Negroamaro Rosato from Puglia and the 2010 Palmina Botasea Rosato from Santa Barbara, which ranged from the salmon-colored, easy to quaff to the ruby-hued, barbecue-friendly domestic with rhubarb-raspberry notes. 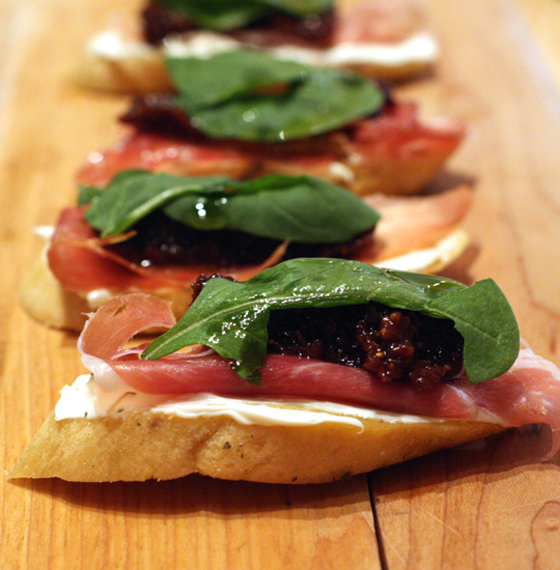 The “Bolzano” ($6) crostini is made for those like me who love a little sweet with the salty. House-made fig spread is smeared on toasted bread, then layered with salty, smoky speck,  sweet mascarpone and arugula.

If you’re dining with a friend, as I was, a platter of assorted cheeses and salumi is a great way to try a lot of things. We went with the “Piccolo” ($15), which serves two to four. A wooden board came to the table, laden with Rovagnati Gran Biscotto ham, imported from Italy; spicy San Danielle salame Calabrese; besaola; gorgonzola from Lombardy; fontina from northwest Italy; artichoke spread; muffaletta spread; and plenty of bread to enjoy it all with. 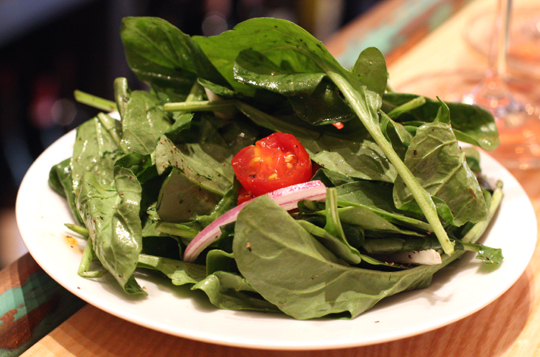 A house-salad ($5) of arugula brought a mound of rather large leaves tossed with cherry tomatoes, red onion, fennel and a zippy vinaigrette sweetened with a little honey.

The “Tonno” ($7.50) panini on francese bread was made with imported Italian tuna mixed with an abundance of capers, green olives, peperoncini, garlic and parsley. So much so that the sharp, salty, assertive ingredients threatened to obliterate the tuna. Guerra’s mom makes a most refined version of carrot cake for dessert. It’s a tiny four-bite square ($2) that’s moist, not too sweet, and decorated with a fanciful swirl of cream cheese frosting that gets extra bling from a touch of gold leaf.

From  start to the finish, you can’t help but feel the warm vibe of family in this establishment, where everyone might not know your name just yet, but you can bet they will in no time flat. 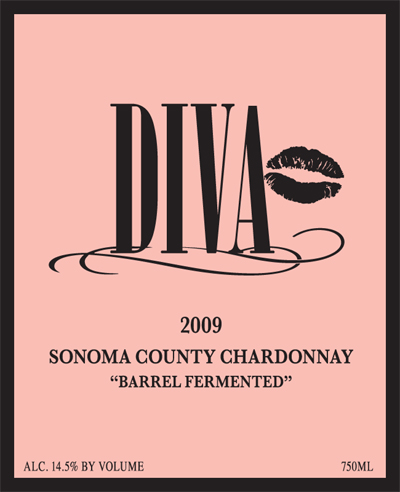 Contest: One lucky Food Gal reader will get a chance to win two bottles each of the 2009 Diva Pinot Noir Sonoma County and the 2010 Diva Chardonnay Sonoma County. The former is a classic New World-style with floral aromas and round, lush fruit. The latter is barrel-fermented with soft buttery notes and the flavor of ripe peach. The wines come courtesy of Enoteca La Storia.

Because of alcoholic beverage laws, this contest is open only to those age 21 and older, and who live in California. Entries will be accepted through midnight Aug. 27. The winner will be announced Aug. 29.

Tell me about your most unusual or most memorable nosh at a bar. Best answer wins.

“It would have to be at the way-too-hip bar at the Chateau Marmont in West Hollywood. It’s dimly lit, filled with young trendoids and the occasional celebrity. My husband and I dropped by once during a long, lazy weekend in Los Angeles. It’s not normally the kind of place where we would hang. But it was recommended by a friend for a cool only-in-LA experience, as well as for the dishes of candy at the bar. As you know, I am an avowed ginger addict. And the candies set before you at the bar are those hot, sticky, chewy ginger ones from Indonesia that you can often buy at Asian markets. I’m not sure how these necessarily go with cocktails. I also can’t remember what drink I ordered that night. But I do remember those candies. And pocketing a few for enjoyment later, too.” Winners of the Previous Contest: In last week’s contest, the floodgates opened when I asked you to tell me about a time you encountered a real jerk. Three winners will receive a sample pack of gourmet, Chinese-style jerky from Little Red Dot Kitchen.

VeggieGirl, who wrote, “I encountered a real jerk when I was at Whole Foods, in the peanut butter/baking aisle looking at some peanut butter jars to purchase (the fun flavors from Peanut Butter & Co. – white chocolate and cinnamon raisin, anyone?). This woman tapped me on the shoulder and said, ‘Don’t you know how fattening peanut butter is?’ I have her a blank stare and then responded, ‘Peanut butter has good fats…’ She laughed and said ‘No such thing.’ I don’t want to sound like the jerk here, but this woman was overweight… I am NOT overweight, so who is the best judge here on peanut butter?! I said to her, ‘Fine, don’t eat the peanut butter then. Let me be.’ I happily purchased 2 jars of peanut butter that day, and continue to be in great shape.”

Cookie, who wrote, “I LOVE Chinese Jerky and remember my mom would always get some at the market for me growing up. OK JERK time!

So the other day I was at Safeway in the Express Lane. Some little old lady was about 2 customers behind me and clearly seemed like she wasn’t feeling well. She had some type of medicine in her hand and wanted to know if she could purchase her bottle of water before me. Of course, I had no problem with that but some JERK behind me (right in front of the old lady) didn’t think it was “right for her to jump the line”. WTF? Seriously? Anyway, I gladly let her go ahead of me and replied to the JERK that he can wait another minute before purchasing (guess what?) his BEER!”

Valerie, who wrote, “I’ll take the opportunity to vent, though it’s on behalf of my friend. She had an experience at Wal-Mart that I couldn’t believe! My friend had gone to Wal-Mart to purchase a flatscreen TV that was on sale. It was the only thing that she was buying, so she loaded it in her cart and headed to the checkout. She got into the ’20 Items or Less’ lane, and then realized that the woman in front of her had an absolutely full cart. Like, overflowing. She wasn’t real happy since it was obvious that this woman and her son were over the limit, but she didn’t say a word. This woman turns around, looks at my friend, glares at her, and then tells her teenage son how ‘some people are so rude – did you see that woman behind us give us ‘the look’ for being over the limit?’ The woman and her son start loudly talking about how people should mind their own business, and my friend was just in shock. She finally said, ‘Ma’am, I don’t care how much stuff you have in your cart. If it really bugged me, I would’ve moved to a different aisle.’ Thinking this would appease the angry mother and son, she turned back to looking at the magazines and candy.

Well, mom and son continue to make snide comments and give rude looks. Finally, after all of their things were loaded and paid for, the mom turned to my friend and said, ‘Well, I hope you learned your lesson about shoving your nose where it doesn’t belong!’ and walked away. My friend just stared after her, then turned to look at the cashier, who immediately started to apologize. My friend shrugged it off, but as she was paying for her purchases she noticed that the mom and son were loitering around the Wal-Mart exit. She said to the cashier, ‘Look! That woman and her son look like they’re waiting for me at the exit! Can you believe that?’ The cashier offered to call security, but my friend declined. After all, it was the middle of a Saturday and it was broad daylight – what damage could they do?

She walked to the exit, pushing her cart with one hand and holding the TV steady with the other. She starts to walk past this woman and her son, and the woman walks up beside her, hits her on the back of the head, and runs off with her teenage son, both of them yelling obscenities at my friend. Are you kidding me?! My friend’s hands were occupied, otherwise she would’ve pushed the woman away, but she didn’t want to risk damaging the TV. Security rushed up to help her, but the woman and her son were long gone.

What kind of a person thinks that this behavior is appropriate? To lie in wait for someone and hit them on the head, all because of a non-existent dirty look? What kind of lesson was this mom teaching to her son? And what are the odds of this sort of thing happening anywhere other than Wal-Mart?” 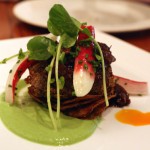