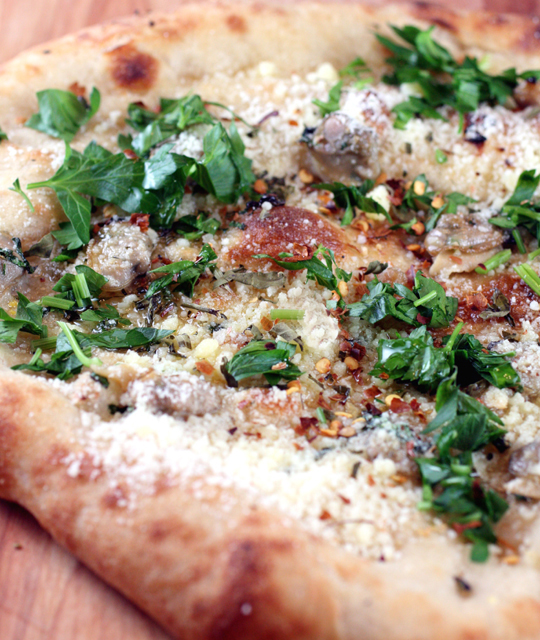 Hands down, this is the best pizza dough recipe — ever.

I don’t say that lightly, either. And believe you me, I’ve tried many others, some quite good.

But the one from “The Mozza Cookbook” (Alfred A. Knopf) by baker extraordinaire, Nancy Silverton, and her chef, Matt Molina, and food journalist Carolynn Carreno, is truly astounding.

It’s got so much character and developed flavor that I could eat the crust plain. How many pizza crusts can you say that about? 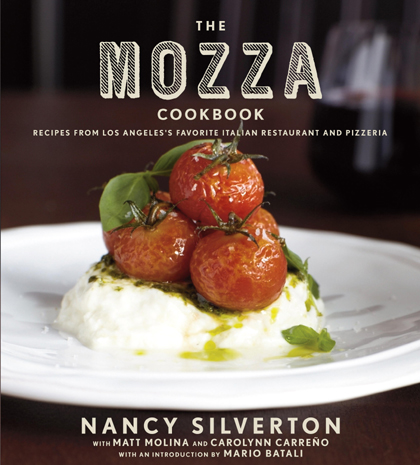 As Silverton explains in the new cookbook, of which I recently received a review copy, it’s not an exact replica of the one served at her Pizzeria Mozza in Los Angeles that she owns with Mario Batali and Joe Bastianich. But having enjoyed the real deal at Mozza every time I’ve visited Los Angeles, I can attest that the recipe in the book makes a pretty darn close approximation to the pizzas that come out of the restaurant’s ferociously hot wood-fired ovens.

They both sport one of the most varied crusts around — at times crisp, chewy and airy. Each bite of crust brings a new texture — from the edges, which puff up in the blistering heat of the oven, to the patchwork of air holes like that of a wonderful ciabatta to the cracker-like center. The flavor is that of a great artisan bread. And no wonder since Silverton practically single-handedly started the gourmet bread trend in Los Angeles when she opened her landmark La Brea Bakery.

I’ve loved this pizza crust from the first time I ever sank my teeth into it years ago in Los Angeles. I can’t be more thrilled to know that I can duplicate it at home now, too.

The difference is that the restaurant version is made with a sponge that ferments far longer than the one in this home-version, which takes only 90 minutes. Still, it’s amazing the complex flavor that develops in just that short amount of time. 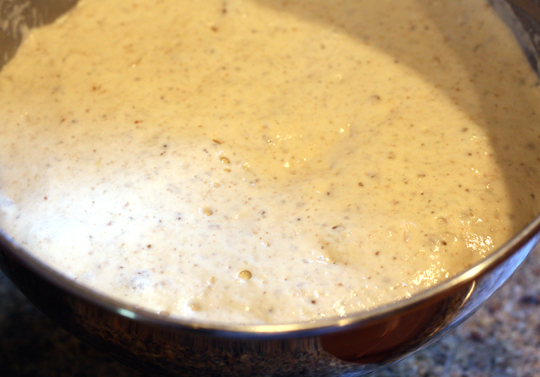 Silverton recommends using a scale to weigh your ingredients for precision. You combine water, yeast, bread flour, rye flour and wheat germ, then let it do its thing for 90 minutes. Next, you add more water, more bread flour, honey and salt, then let the dough proof for another 2 1/2 hours or so, before it’s ready to be shaped and baked.

The dough is a little tricky to work with at the start. It’s not your usual dense ball of dough. Instead, it’s rather flabby and soft. In fact, you will see big air bubbles form as it proofs, much like when you make ciabatta dough. As a result, the dough will start to cascade over your hand the moment you pick it up.  It doesn’t take much effort to pat it out into a thin round. In fact, you have to take care not to let it get too thin in the center. 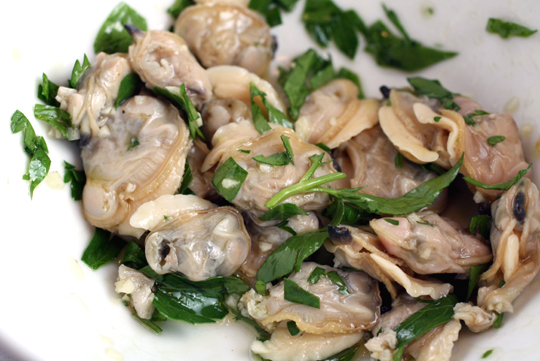 Since the clam pizza at Mozza is one of my favorites, that’s the topping recipe I went with. For each pizza, you’ll need about 1 pound of littleneck clams. The ones we bought were a little small, so next time I’d up the amount of clams a bit.

The clams are cooked with water in a saucepan, then shucked. The clams are combined with garlic and olive oil to make the topping that gets strewn over the unbaked crust. We baked our pizza on a pizza stone in our Big Green Egg heated to about 625 to 650 degrees. It was done in 4 minutes tops.

Plunge in — and prepare to weep with utmost pizza joy. 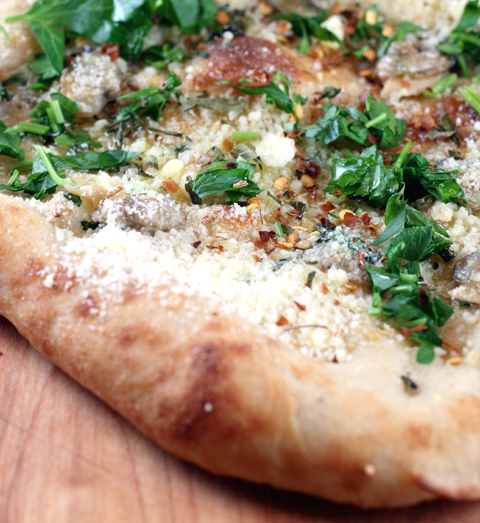 (Makes enough dough for 6 pizzas; each pizza serves one)

1 1/2 teaspoons barley malt or mild-flavored honey, such as clover or wildflower

Olive oil, grapeseed oil, or another neutral flavored oil, such as canola oil, for greasing the bowl

To make the sponge, put 15 ounces of water and the yeast in the bowl of a standing mixer and let it sit for a few minutes to dissolve the yeast. Add 13 ounces of the bread flour, the rye flour, and the wheat germ. Stir with a wooden spoon to combine the ingredients. Wrap the bowl tightly in plastic wrap and tightly wrap the perimeter of the bowl with kitchen twine or another piece of plastic wrap to further seal the bowl. Set the dough aside at room temperature (ideally 68 to 79 degrees) for 1 1/2 hours.

Uncover the bowl and add remaining 7 ounces of water, the remaining 13 ounces of bread flour, and the barley malt. Fit the mixer with the dough hook, place bowl on the mixer stand, and mix the dough on low speed for 2 minutes. Add salt and mix on medium speed for 6 to 8 minutes, until dough starts to pull away from the sides of the bowl. Note that the dough will not pull so much that it completely cleans the bowl, but if the dough is too sticky and is not pulling away from the sides at all, throw a small handful of flour into the bowl to make it less sticky. While the dough is mixing, lightly grease with olive oil a bowl large enough to hold the dough when it doubles in size. Turn the dough out of the mixer into the oiled bowl. Wrap the bowl as before. Set dough aside at room temperature for 45 minutes. Dust your work surface. Acting as if the round has four sides, fold the edges of the dough toward the center. Turn the dough over and return it, folded side down, to the bowl. Cover the bowl again with plastic wrap and set it aside for 45 minutes.

Dust your work surface again lightly with flour and turn the dough out onto the floured surface. Divide the dough into six equal segments, each weighing approximately 7 ounces. Gently tuck the edges of each round of dough under itself. Cover the dough rounds with a clean dishtowel and let them rise for 5 minutes.

Lightly flour your hands and use both hands to gather each round of dough into a taut ball. Dust a baking sheet generously with flour and place dough rounds on the baking sheet. Cover the baking sheet with the dishtowel and set them again at room temperature for 1 hour to proof the dough. (Or leave the dough on the counter to proof instead.)

To assemble and bake your pizzas: Prepare your topping ingredients.

Remove oven racks from the oven and place a pizza stone on the floor of the oven.

Preheat oven and the stone to 500 degrees, or as hot as your oven will go, for at least 1 hour. In a pinch, use the underside of a thick baking sheet (don’t use a nonstick one).

When your dough is ready, generously flour your work surface and place one round of dough in the center of the floured surface. Dust the dough lightly with flour. (If you haven’t already, right about now you will want to pour yourself a glass of wine.)

Using your fingertips as if you were tapping on piano keys, gently tap on the center of the dough to flatten it slightly, leaving a 1-inch rim untouched.

Pick up the dough, ball both of your fists, and with your fists facing your body, place the top edge of the dough on your fists so the round stretches downward against the backs of your hands, away from them.

Move the circle of dough around your fists like the hands of a clock so the dough continues to stretch downward into a circle.

When the dough has stretched to about 10 inches diameter, lay it down on the flour-dusted surface.

Brush the rim of the dough with olive oil and sprinkle kosher salt over the surface of the dough.

Dress the pizza how you have chosen, making sure to leave a 1-inch rim with no sauce or toppings around the edge.

Dust a pizza peel with semolina and slide the pizza peel under the pizza with one decisive push. You are less likely to tear or misshape the dough with one good push of the peel than several tentative pushes. Reshape the pizza on the peel if it has lost its shape. Shake the peel gently to determine whether the dough will release easily in the oven. If it is sticking to the peel, carefully lift one side of the dough and throw some more semolina under it. Do this from a few different angles until there is semolina under the entire crust.

Open the oven door and slide the dough onto the preheated stone. Again moving decisively, pull the peel toward you to leave the pizza on the stone.

Bake the pizza until it is golden brown and the rim is crisp and blistered, 8 to 12 minutes. Cooking times vary depending on the power of your oven.

While the pizza is in the oven, clear a space on a clean, dry cutting board or place an aluminum pizza round on the counter to put the baked pizza on.

When the pizza is done, slide the peel under the crust, remove it from the oven, and place it on the cutting board or round.

Use a rolling pizza cutter to cut the pizza.

From “The Mozza Cookbook” by Nancy Silverton

1 round of Nancy’s Pizza Dough (see recipe above)

Wedge of Parmigiano-Reggiano, for grating

Wedge of pecorino romano for grating

To prepare the clams, put them in a small saute pan or saucepan with 1 cup of water over high heat. Cover the pan, reduce the heat to medium, and cook the clams until they steam open, 3 to 4 minutes. Turn off the heat and remove the clams from the juice, discarding any clams that didn’t open. Discard the juice, shuck the clams, and discard the shells. Drain clams in a colander and let them sit in the colander to release excess liquid for about 5 minutes. Transfer clams to a small bowl. Stir together the garlic and the oil. Add half of the oil-garlic mixture to the clams, reserving remaining mixture to dress the pizza, and stir to coat the clams with the seasonings. You can prepare the clams up to this point up to several hours in advance. Transfer clams to an airtight container and refrigerate until you are ready to use them.

To make the pizza, prepare and stretch the dough and preheat the oven, according to instructions in other recipe above.

Brush rim of the dough with the olive oil and season the entire surface with salt. Add a pinch of the sliced parsley or oregano leaves to the bowl with the clams and stir to combine. Spread the remaining tablespoon of the oil-garlic mixture over the pizza, leaving a 1-inch rim without any oil. Scatter clams over pizza, slide the pizza into the oven, and bake until the crust is golden brown, 8 to 12 minutes. Remove pizza from the oven and cut into quarters. Sprinkle dried oregano over pizza, and use a microplane or another fine grater to grate a light layer of Parmigiano-Reggiano and another of the pecorino romano over the surface. Sprinkle red pepper flakes and remaining parelsy or oregano leave over the pizza, drizzle with finishing-quality olive oil, and serve.

From “The Mozza Cookbook” by Nancy Silverton 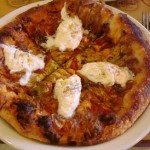 More: My Meal at Pizzeria Mozza 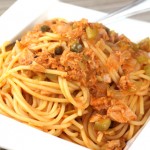 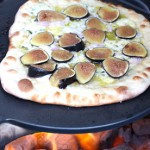 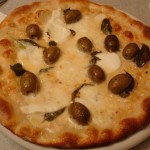