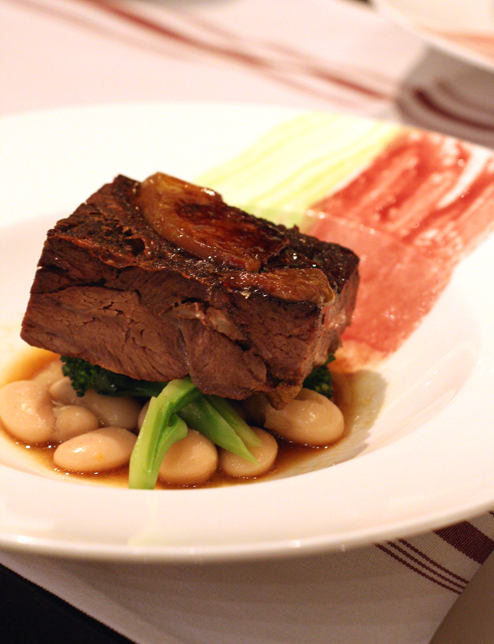 I’m not usually met with protesters when I go out to dinner.

But such was the case last Thursday night at the “FU Foie Gras” dinner at Lafitte in San Francisco, where 10 peaceful protesters held up signs outside the restaurant, imploring people to stop eating foie gras, the luxurious fattened liver of a goose or duck.

If you’re a fan of that rich delicacy, you better enjoy it while you can. Come July 1, California will become the only state in the nation to ban the sale of foie gras. 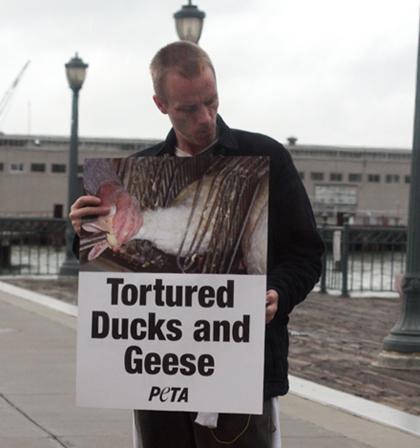 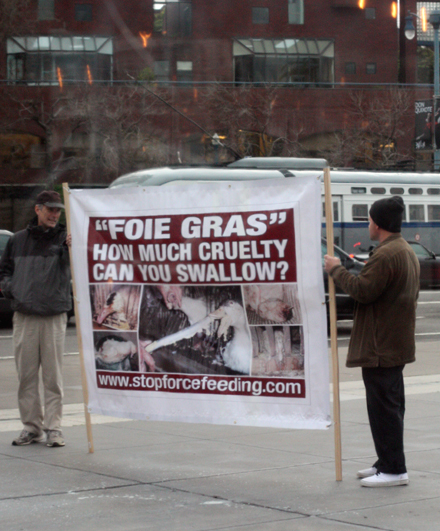 Animal welfare supporters, many of whom have been picketing restaurants that have foie on the menu, applaud the upcoming law that will stop what they believe is inhumane treatment of the birds, which are speed-fed with a tube down their throat to engorge their liver. But many chefs are rallying against the law, which they believe is unnecessary and unfair. A number of them, including Lafitte’s Chef-Proprietor Russell Jackson, have visited foie gras farms in the United States and found no such mistreatment, especially because ducks have no gag reflex, breathe through their tongue, and naturally increase their consumption when they migrate.

There are only three major producers of foie gras in the United States. Two are in New York: Hudson Valley Foie Gras and La Belle Farm. And only one is in California: Sonoma Foie Gras. 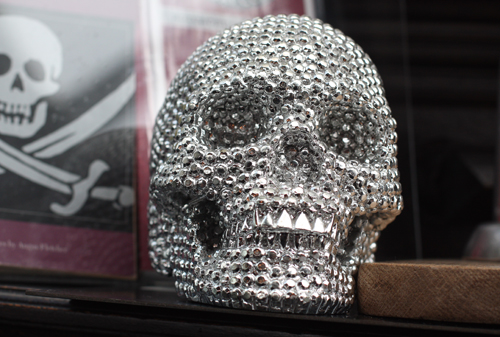 Since late last year, restaurants throughout the state have been hosting special foie gras dinners to educate the public and build grassroots support for the pricey ingredient that’s been produced as far back as ancient Egyptian times. Proceeds have gone to support CHEFS (Coalition for Humane and Ethical Farming Standards), a pro-foie advocacy group made up of restaurateurs and other culinary professionals.

Lafitte has been hosting sold-out foie gras dinners monthly since October and plans more right up until the July 1 deadline. Last week, I was invited as a guest of the restaurant to experience its $89 six-course prix-fixe that featured foie in every dish, including dessert. 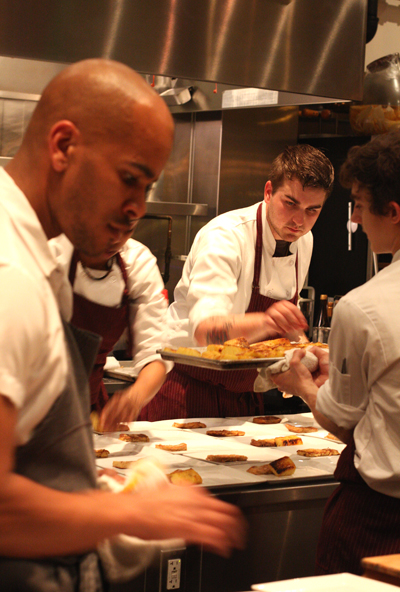 Beyond the protesters outside, there also was a Canadian TV crew inside filming the event for an upcoming documentary on the issue.

Chef Jackson welcomed diners by imploring, “Don’t let the rhetoric stop us from our rights. This is worth fighting for.” 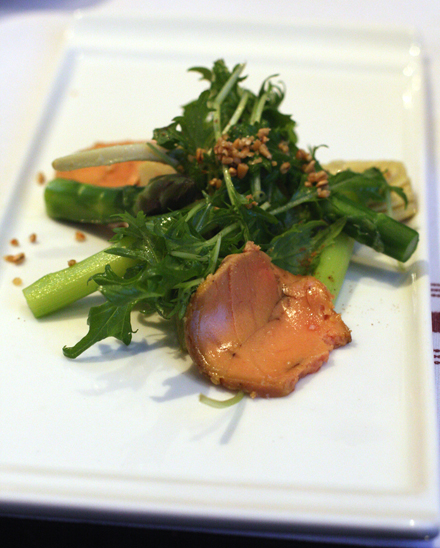 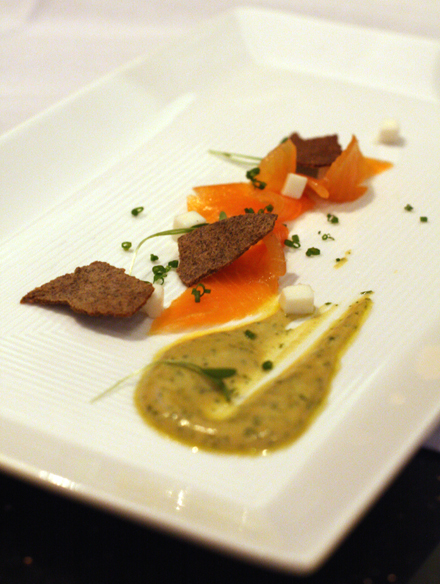 He didn’t have to convince his diners, who cleaned their plates after every course. Dinner began with porcini-cured foie gras torchon with spring artichokes and asparagus, followed by slivers of artic char gravlax with an insane foie gras mustard that would be good on anything plus tiny cubes of cardamom gelee that brought bursts of spice intensity to the dish.

Next, piped foie gras mousse with pistachio praline that made you think of peanut butter and jelly, what with its accompaniments of grapefruit, blood orange and lemon gelee. 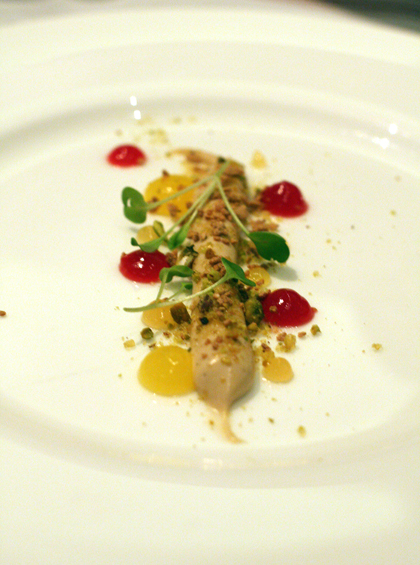 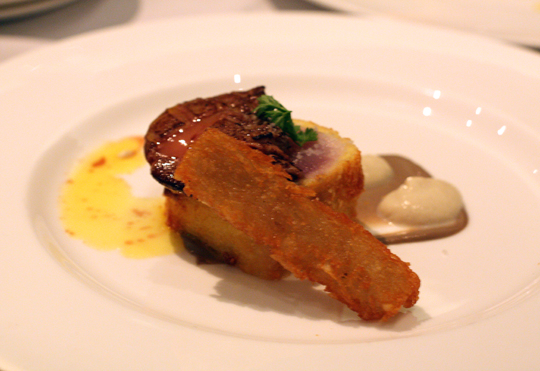 Imagine a tater tot enveloping a piece of fish and you have the next dish: seared albacore crusted in potato rosti. Seared foie gras over the top added even more richness for a spectacular combo.

The actual dessert was a play on French toast, served with roasted pineapple, a candied tarragon leaf, and yes, foie gras ice cream. The latter was more subtle than expected. It was like a very rich vanilla ice cream with a little more complexity on the finish. Jackson quipped that he’s made the ice cream with a much more pronounced foie flavor, but didn’t want to overload folks that night, especially after so many other courses of the fatty liver. Other restaurants continuing to host special foie gras dinners in the Bay Area include Txoko in San Francisco, Martin’s West in Redwood City, and Alexander’s Steakhouse (locations in Cupertino and San Francisco). Also, check out the foodie meet-up experience known as DishCrawl, which will be hosting foie dinners at various Bay Area locations throughout April.

For more insight into the foie gras controversy, see my story in Food Arts magazine. 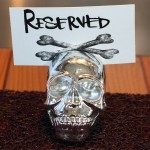 More: Dinner at “the Plank” at Lafitte