A Chef Worth Getting to Know in Sonoma County 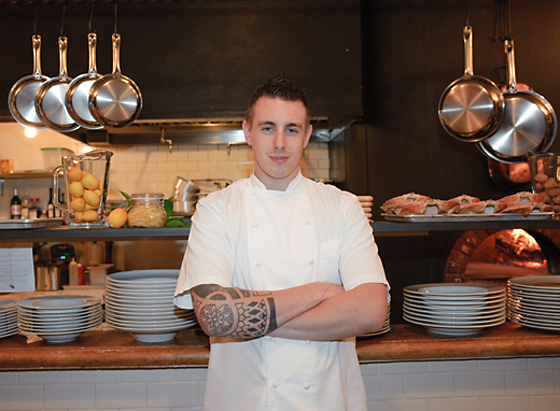 And yes, he’ll be the first to tell you that he did get yelled at by the famous chef who’s known for his rather colorful outbursts.

“You think you’re doing it right and then you hear it,” Snook says with a knowing chuckle. “I got called ‘f—ing donkey’ many times, especially my first year there.”

After becoming sous chef at the flagship Restaurant Gordon Ramsay, then working at Maze by Gordon Ramsay at the London hotel in New York, Snook was ready for a change of pace.

Married to a former Gordon Ramsay pastry chef, and with a new baby, Snook and his family were ready to trade the hustle-bustle of New York City for a more bucolic existence reminiscent of the English countryside. They found what they were looking for in the Valley of the Moon, otherwise known as Kenwood in Sonoma County. 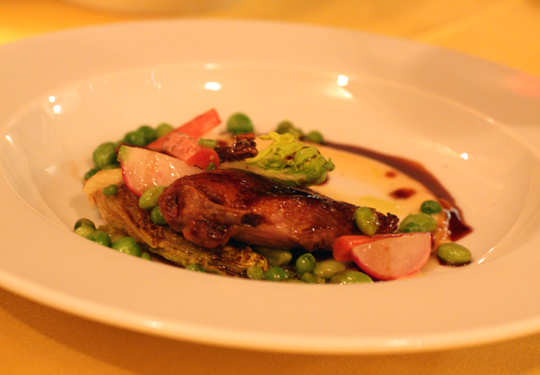 For the past four months, Snook has been the executive chef of the Restaurant at Kenwood Inn and Spa. The 26-room Mediterranean-style inn is surrounded by vineyards and fruit orchards. Its 22-seat restaurant with a roaring fireplace has the feel of an intimate, out-of-the-way European country-side restaurant. In Snook’s hands, it’s most definitely worth visiting, too. 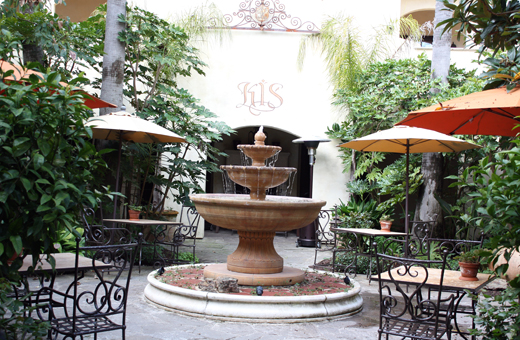 The one catch is that the restaurant is only open to guests of the inn. But you can become a “guest for the day” if you book an appointment at the inn’s spa.

A few weeks ago, I was invited to be a guest for an overnight stay at the inn and for dinner in the restaurant.

With its multiple pathways and staircases that lead to the suites and rooms, the interior courtyard reminded me a little of an MC Escher drawing come to life. The rooms have the feel of a stately chateau that’s a little worn around the edges. Rooms have heavy drapery, and wood and wrought-iron shutters on the windows that will definitely have you sleeping well in blissful darkness. 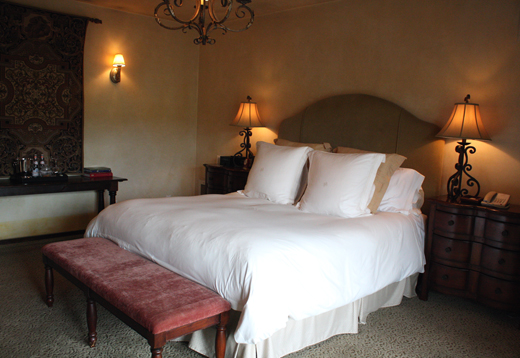 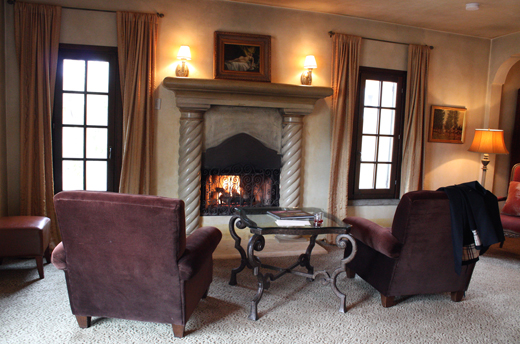 The restaurant is conveniently located on the first floor of the interior courtyard. Inside, it’s warm and inviting. The small, open kitchen with a wood-fire oven is manned by Snook and one other cook, who can be seen working in tandem as they plate the dishes.

Snook has brought his sensibilities to bear on this small space. As one of the conditions of his acceptance of the job, he asked that part of a vineyard near the restaurant be pulled up so that he could plant a vegetable and fruit garden. It’s a tiny space, but he’s made the most of every inch, planting blueberries, raspberries, wild strawberries, snow peas, tomatoes, chives, basil, English peas, pineapple guava, globe artichokes and baby lettuces. Pomegranate, Meyer lemon, lime and orange trees also flourish here. At Hop Kiln Winery, a sister property, Snook makes use of the root veggies grown there to incorporate into his dishes. By this summer, Snook hopes to be able to get 80 percent of his produce needs straight from his garden. 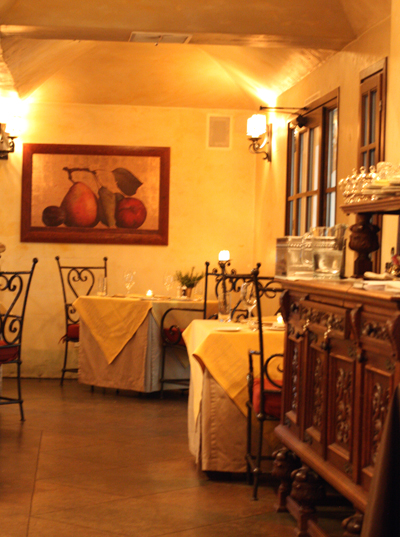 There’s an a la carte menu, as well as a seasonal prix fixe for $95. Snook isn’t afraid to offer squab, even though he knows it’s not nearly as popular in the States as it is in the UK. He knows the American penchant for super-sized portions and hefty amounts of salt. But he’s confident enough to do his own thing, which means elegant fare in modest portions with sophistication, skill and restraint.

My husband opted for the a la carte menu, while I decided to try the five-course prix fixe that celebrated the arrival of spring rhubarb.

My starter was a silky “foie gras under glass” — or rather in glass, as the terrine arrived in a cute little mason jar topped with rhubarb gelee and poached rhubarb. A warm brioche that looked like a popover was off to the side, perfect for tearing off chunks to spread the smooth foie thickly on. 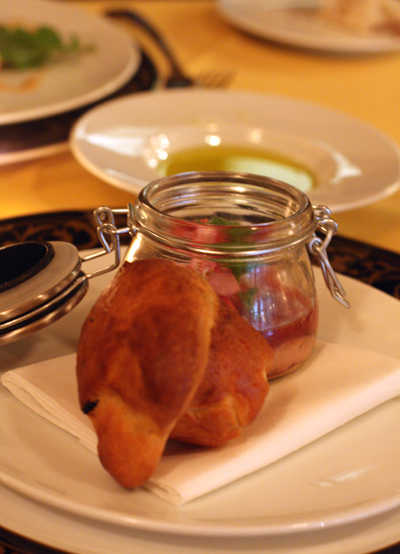 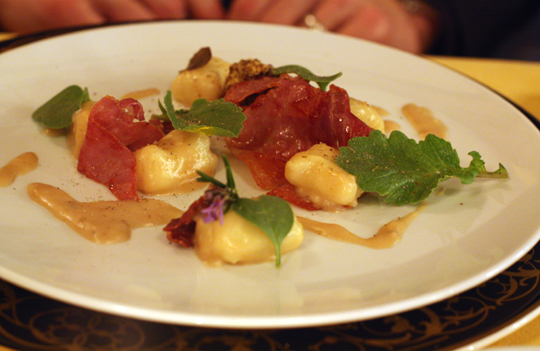 My husband started with the potato gnocchi with prosciutto ($16). The dumplings were tender, cheesy with taleggio and smoky with bits of Prosciutto di Parma.

Next up for me was a house-smoked mackerel. It was an explosion of assertive flavors — the strong oiliness of the fish, tempered by the smoking process, then revved up with tangy vinegar, the sweetness of rhubarb and the nuttiness of artichokes. 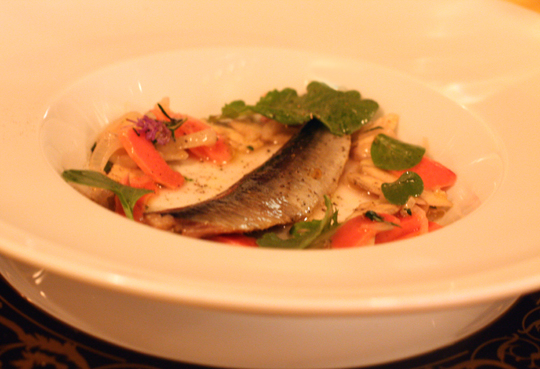 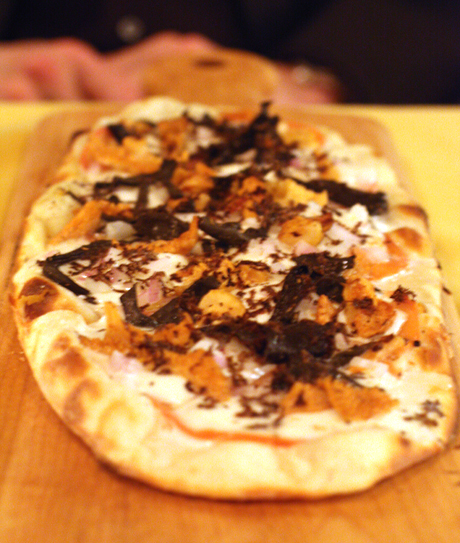 My husband’s wood-fired pizza ($18) was whimsically described as having “stolen mushrooms” on it. Snook discovered a path between the inn and another property, where he’s been able to forage chanterelles. The pizza, with roma tomatoes and black truffle, got a little soggy in the middle, most likely from the moisture in the mozzarella. As an intermezzo between the starters and the main course, a delightful rhubarb sorbetto was served to each of us. Made with rosemary, it had a wonderful resiny note to balance the sweetness of the fruit. It was like sipping fruit punch in an old-growth forest.

My husband’s monkfish was smoked with more of that rosemary that grows inches away from the kitchen. It also came with more “stolen mushrooms,” as well as house-cured bacon that’s smoked with wood from old wine barrels that have been soaked in red wine for a week. My husband’s not always keen on lentils, but he devoured these. After all, who could resist them with their heady bacon flavor? My roasted squab breast and leg was cooked just the way I like it. So many chefs like to serve small birds like this quite rare. But the flesh often ends up a little too slimy in texture for my taste. Snook prefers to go closer to medium for his squab. The result is meat that’s tender, juicy and with a more pleasant density. English peas, heirloom radishes and grilled lettuce added a nice crunch. 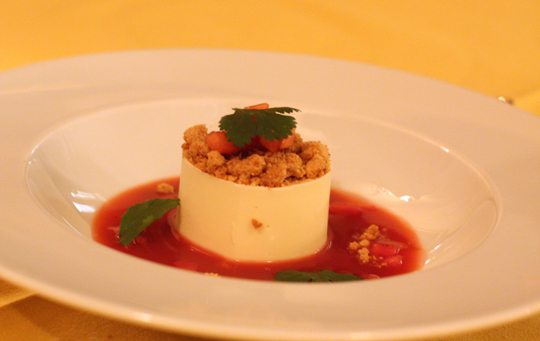 To finish, a honey-mascarpone panna cotta, silky and smooth as can be, with a cookie crumble topping, rhubarb consomme, pickled rhubarb and the unexpected garnish of cilantro, which gave the dessert just a touch of savoriness.

In New York, Snook would put in late hours, then go out drinking with his kitchen crew, before heading home. In Kenwood, he leads a more serene life — usually finishing up at the restaurant around 10 p.m., then going home, before coming back to the restaurant at 6 a.m. for breakfast service.

Yes, when you stay at the inn, a full breakfast is included in the price of your room. And you’ll see Snook bright and early, cooking the day’s featured entree to order. He’s not a believer in massive stacks of pancakes and four-egg omelets filled to overflow. Instead, he likes to assemble a pretty plate that has just enough to satiate, especially after you’ve partaken of the crumb cake, pastries and apple pie (a recipe from the property owner’s Mom) that’s also offered. 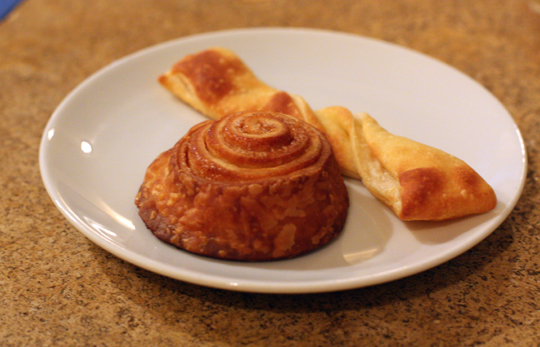 That morning, the entree was a plate that featured a perfect sunny side up egg (from chickens raised by one of the spa employees) with a bright orange yolk, a fluffy pancake and a small mound of impossibly uniformly diced potatoes crisped with bits of that amazing house-made bacon. 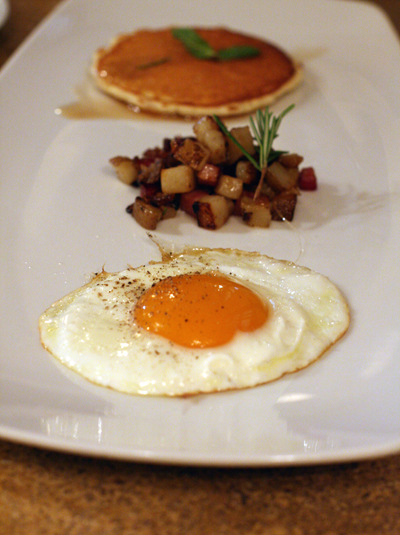 After you’re done, a server will come by to ask if you want more of anything. You can even have a whole ‘nother complete plate of all three items — which is what my voracious husband did.

Snook still talks to Ramsay regularly by phone. He’s even invited Ramsay to come by the restaurant. But with his globe-trotting schedule, Ramsay has yet to make it in. I hope he gets a chance to do so one day soon. Because Gordon, no doubt, you’d be proud of what you find here. 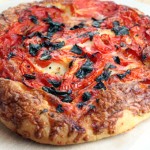 More Places to Check Out in Sonoma County: Downtown Bakery in Healdsburg 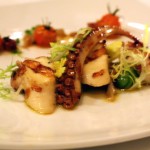 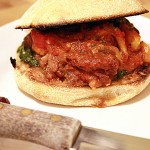