For those suffering from gluten allergies or intolerance, Chef Thomas Keller comes to the rescue.

His line of baking mixes, sold exclusively by Williams-Sonoma, makes use of his own “Cup 4 Cup”  custom-blended gluton-free flour, which has proven a runaway hit. Cup 4 Cup, which also is sold at Williams-Sonoma for $19.95 for a three-pound bag is in such high demand that when I tried to get a sample bag earlier this year, I was told it was on back order for three months. It’s a blend of cornstarch, white rice flour, brown rice flour, milk powder, tapioca flour, potato starch, and xanthan gum that can replace all-purpose flour in a recipe in a direct 1-to-1 ratio.

Fortunately, I was able to try samples of the baking mixes.

Even without any gluten issues, I was thoroughly smitten by the Ad Hoc Waffle and Pancake Mix ($18.95), which made some of the fluffiest pancakes I’ve ever had. You just add an egg, melted butter and milk to the mix. The texture truly is amazing. With the Ad Hoc Gluten-Free Brownie Mix ($18.95), you also need to add eggs and butter. Everything else is included. But one thing that was a little perplexing were the two bags of chocolate chunks that were included. One is slightly larger than the other — containing about 1 1/4 ounces more, according to my scale. You’re instructed that one packet is used to create the melted chocolate for the batter and the other packet is for mixing into the batter. But neither bag is specifically marked, so you’re left to guess which one to use for which purpose. In the end, I used the larger bag for melting.

The brownies turned out quite fudgy, with a deep, dark chocolate taste.

The mixes are available in William-Sonoma stores or on its Web site. 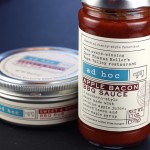