If you spied the huge white tent pitched in the heart of San Francisco’s Union Square this past weekend, you knew it could only mean one thing:

Top chefs, vintners, sommeliers and mixologists descended upon downtown to put on a series of special dinners, wine seminars, panel discussions, and culinary battles before setting up inside the tent to dole out gourmet eats and drinks to throngs of attendees. 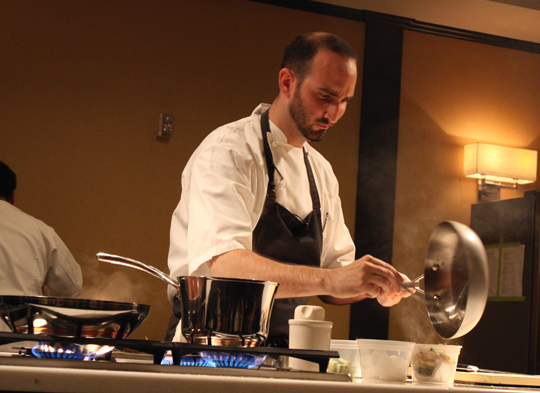 Earlier that afternoon, the first round of the Eater Chef Challenge took place at the Westin St. Francis Hotel, pitting the team of Mark Sullivan of Spruce in San Francisco and Omri Aflalo of Bourbon Steak in San Francisco against the team of Mark Dommen of One Market Restaurant and David Bazirgan of the Fifth Floor in San Francisco. With an hour on the clock, the two teams had to incorporate lamb and Guittard chocolate into two dishes, which were presented to a panel of judges. 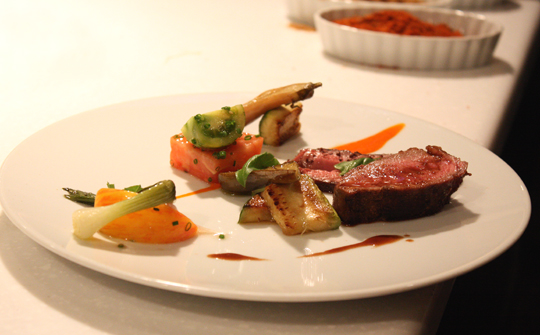 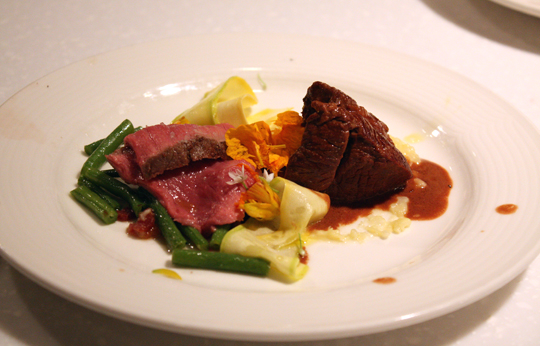 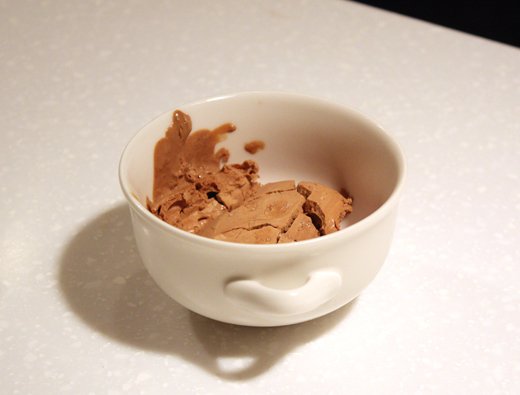 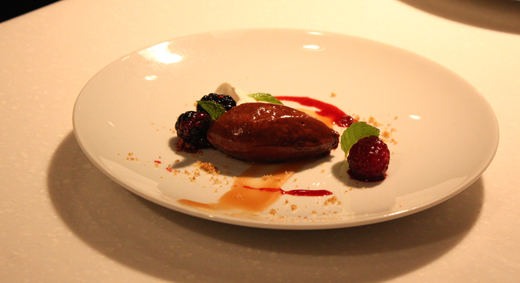 In the end, only two points separated the two teams, with the judges awarding the victory to Dommen and Bazirgan for the more pronounced chocolate flavor in both their dishes. It may have helped that Bazirgan had his wife and 4-month-old son in the audience cheering him on. Bazirgan joked that when his son is ready for his first bite of real food, he plans on it being foie gras, the fattened duck liver product now banned in California. Here, in photos and text, are highlights from last Friday’s events:

* Sullivan on watching Bazirgan pull out the tank of liquid nitrogen during the cook-off challenge: “No, I don’t use the stuff in my restaurants. I’m deathly afraid of it.”

* “Top Chef’‘ alum, Ryan Scott of Market & Rye in San Francisco on his early days, growing up in the Central Valley: “When I was 11, my parents had a restaurant. I saw them go bankrupt, close, lose their house and divorce. And still, I wanted to go into this business.”

* Scott on how he struggled after the Peter Merriman restaurant in Hawaii he worked at closed in the aftermath of 9/11 when tourism plummeted: “I was living in my car, eating two Whoppers a day because I had coupons and only $800 in the bank, and showering at 24-Hour Fitness because it was the only membership I had.” He later staged at Alan Wong’s before heading to the mainland, where he knocked on the backdoor of Gary Danko for weeks on end, until he was allowed to stage there, too. 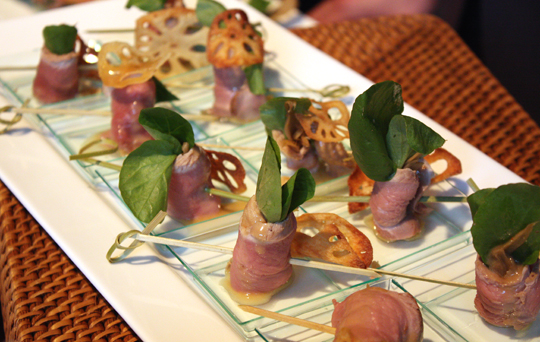 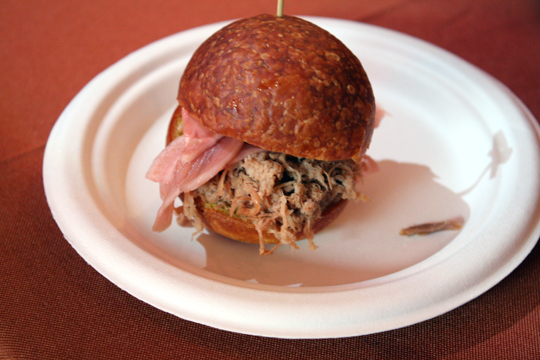 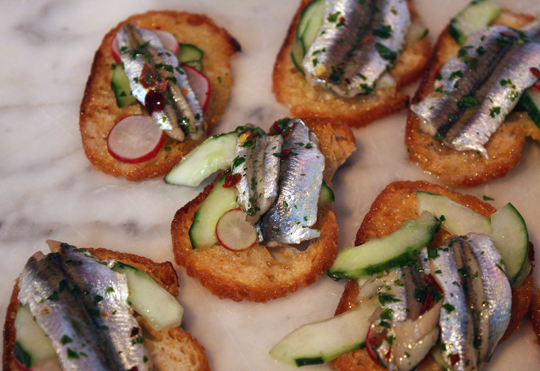 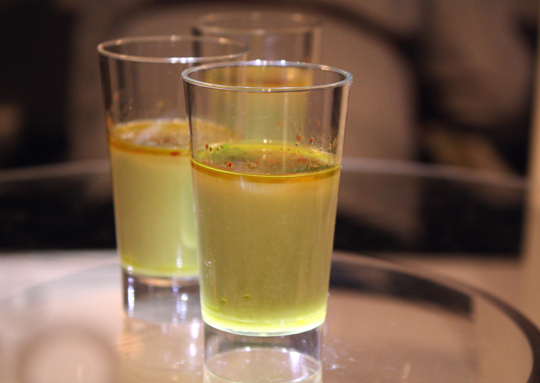 * Restaurateur Larry Mindel, on looking back at his career that spawned Poggio in Sausalito, the Il Fornaio chain, as well as Guaymas in Tiberon, MacArthur Park in San Francisco, and the recent Copita in Sausalito with his friend, Chef Joanne Weir: “I’m a restaurant nymphomaniac.” * Craig Stoll of Delfina in San Francisco on trying to decide upon a career when he was younger: “I thought about journalism and I thought about cooking, because I was hell-bent on finding a career that paid very little.”

* Stoll on why he was hooked after working as a dishwasher at age 15 at a Florida restaurant: “I loved it because they treated me as an adult — and they gave me beer.”

* Stoll on how he and his wife came up with the money to open Delfina: “I applied for every credit card out there. I don’t want to say it was a Ponzi scheme, but…When we found the spot, which was a former Brazilian cafe, the rent was cheaper than our apartment. So, I figured if it didn’t work out, we could just live there.” 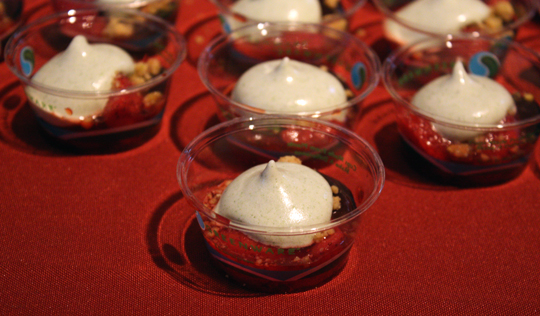 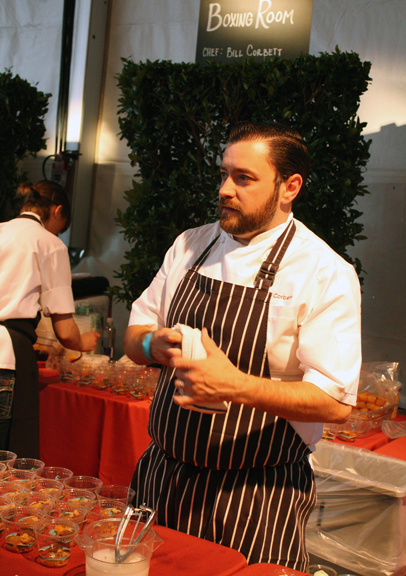 * Laurence Jossel of Nopa and Nopalito, both in San Francisco, about whether chefs race to use the first ingredients of the season: “I’m sure some chefs do want to be the first to use corn or whatever. Somehow it always seems to be Michael Tusk of Quince, too!”

* Paul Canales, chef-owner of the upcoming Duende in Oakland, on why that doesn’t always make sense: “It’s not always the best stuff at the start of the season. To be a little Oakland, ahem, sometimes the first of the season stuff is sh-t.”

* Jossel on  his respect for farmers: “If it rains or it’s a heatwave, we open our restaurants. We’re fine. But those guys take the risk. It’s hard, tough, nasty work.” 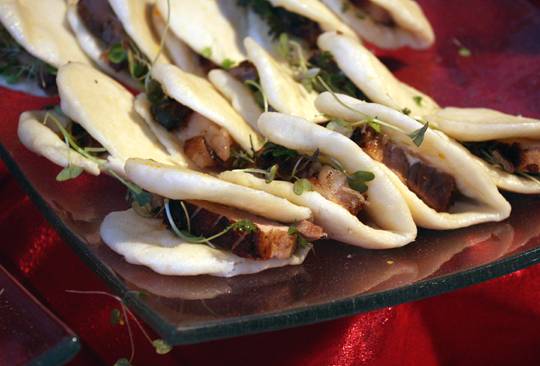 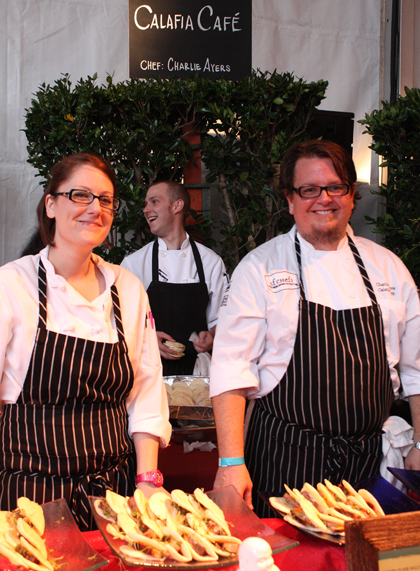