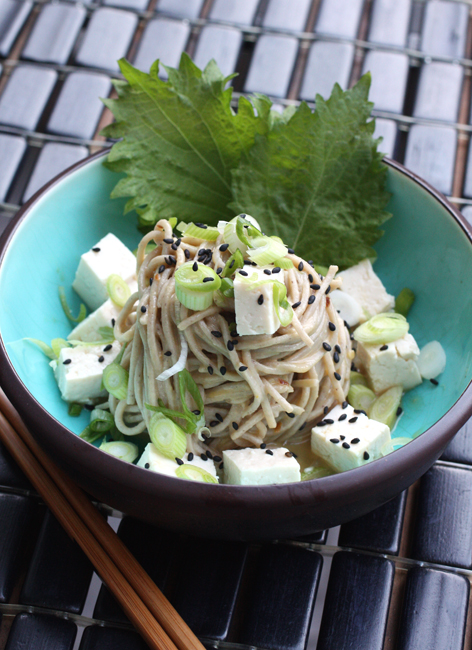 It’s a chilled salad perfect for the last dog days of summer. The buckwheat noodles are tossed with a reduced sauce made with orange juice, soy sauce, sesame oil, sugar and rice wine vinegar. Black sesame seeds and shards of scallions are scattered on top, along with cubes of firm tofu.

I couldn’t resist adding some fresh shiso leaves, which I grow in my backyard, for their minty-basil-like lilt.

The cold, earthy noodles are a perfect foil for the citrusy-sesame flavors.

Feniger will be in the Bay Area this week for a series of events. Join her at Insalata’s in San Anselmo at 6:30 p.m. Sept. 20, when she’ll be doing a pop-up dinner, showcasing dishes from the book. Tickets are $110 per person and includes the meal, wine, tax, and tip, as well as a signed copy of Feniger’s new cookbook. 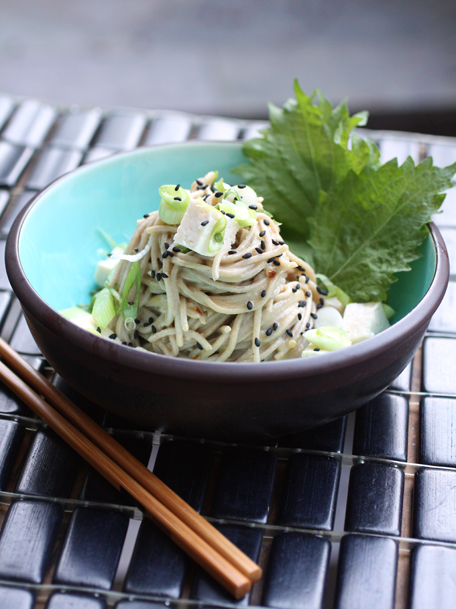 1 (10-ounce) package firm tofu, patted with paper towels to soak up any extra water, then cut into small cubes and salted to taste

Shiso leaves, left whole for garnish, or sliced into ribbons to top the noodles (optional)

Pour orange juice into a small saucepan set over medium-high heat, and bring to a boil. Then reduce the heat to low and simmer for 30 to 40 minutes, or until the orange juice is thick and syrupy and has reduced to about 1 cup.

While the orange juice is simmering, cook your noodles: Bring a large of water to a boil. (The general ratio for cooking noodles is 4 quarts of water per pound of noodles.) Add noodles to the boiling water and stir well. Reduce heat to medium-low and cook for 5 minutes, stirring occasionally. Drain noodles and rinse them twice with cold water. Drain well, and transfer them to a bowl.

When your orange juice is ready, remove the pan from the heat. Pour the syrupy juice into a blender, and add soy sauce, sesame oil, sugar and rice wine vinegar. Puree until smooth and emulsified, about 2 minutes. Pour half of the dressing over the noodles and toss well to combine. Put the noodles in the refrigerator to cool, 20 to 30 minutes.

Toss the cooled noodles with toasted black sesame seeds and sliced scallions. Top with tofu, and shiso (if using), and serve with remaining dressing on the side. If you have any leftover dressing, use it to perk up salad greens the next day. 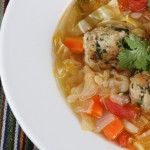