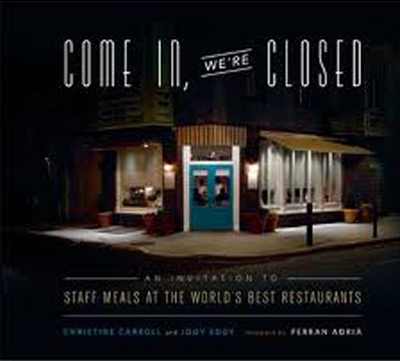 Staff meal is what fuels the front of the house and back of the house workers for the night of service to come. It’s often eaten quickly. And it’s made usually from scraps or trimmings. Though, with restaurants at this caliber, that often means some pretty amazing detritus to work with. Just consider the bibimbap served to staff at Anissa in New York. It’s made with Wagyu beef. Or the lasagna bolognese that the crew at Frasca Food & Wine in Boulder get to chow on. It’s made with fresh, handmade egg yolk pasta.

For each restaurant profiled, there are photos of the servers and cooks, a Q&A with the chef, and recipes from staff meals eaten there.

Some restaurants take staff meals more seriously than others. At wd-50, Dufresne serves this green salad because he knows so many on his staff like it. Not only that, but he makes sure there is dessert at staff meal, a luxury most other restaurants don’t include. Moreover, any staff member who is celebrating a birthday gets to special order a favorite dessert to enjoy at the meal. How civilized is that?

This simple, refreshing arugula salad is full of texture, crunch and piquant flavors from its creamy honey-mustard vinaigrette that gets whirled in a blender and stays emulsified for days in the refrigerator. You could embellish the salad more if you want by adding some sliced cucumbers or blanched green beans, too.

If your interest is piqued by this book, stay tuned for tomorrow’s post. You know how similar movies on the same topic seem to get released around the same time? Apparently, that’s true with cookbooks about staff meals, too. Read tomorrow about another cookbook that looks at staff meals at a select group of New York restaurants.

Combine shallot, honey, mustard and vinegar in a blender and puree on high speed until combined. Add oil in a slow, steady stream while continuing to blend, until dressing is thick and creamy, about 30 seconds. Season with salt and pepper. Yields about 1 1/2 cups. Extra dressing can be refrigerated in a covered container for up to a week.

Toss arugula, fennel, and cashews with enough dressing to make everything glisten, and serve immediately.

From “Come In, We’re Closed: An Invitation to Staff Meals at the World’s Best Restaurants” by Christine Carroll and Jody Eddy 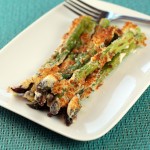