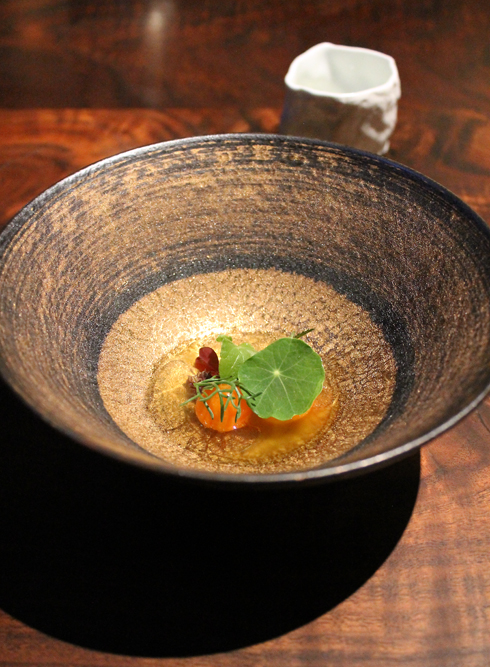 San Francisco’s Saison might just be the ultimate pop-up success story ever.

In 2009, it started humbly enough as a once-a-week pop-up in the rear part of the casual Stable Cafe in the Mission District. It featured the uncanny juxtaposition of Chef Josh Skenes’ high-concept food and Sommelier Mark Bright’s exceptional wines in proper Riedel stemware contrasted with jeans-clad servers attending to guests seated in slat-style garden-variety chairs at bare-bones wooden tables.

Fast forward to 2013, where it’s has not only been transported to a different part of town, but now holds the distinction of being the priciest restaurant in the city. Its tasting menu will set you back $248 per person. If you want wine pairings, that”ll be another $148 per person.

Perhaps you saw Bon Appetit magazine’s September edition, in which it named Saison as one of “America’s Best New Restaurants.” The insightful story broke out why the restaurant costs run so high: The custom build-out of the kitchen and dining room? $2.8 million. Food costs per week? $15,000. The four tanks that hold live seafood? Also $15,000. The meat aging room? $40,000. The wood-burning hearth? $50,000. That hand-made dinner plate you’re eating off of? $300. The Levi’s-designed cook’s uniforms? $500 each. And that cashmere throw provided if you get chilly? You guessed it — $500.

And the place seats only 32. 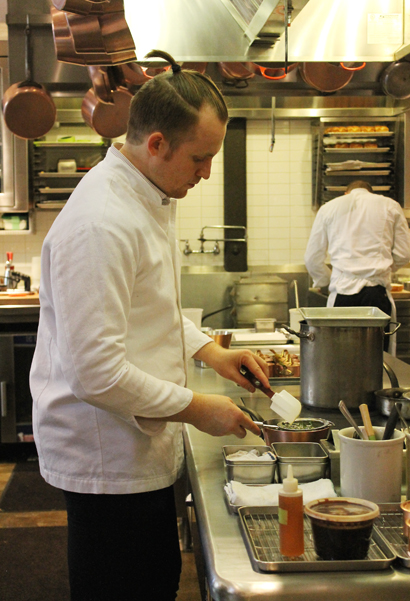 Skenes just before the start of service. 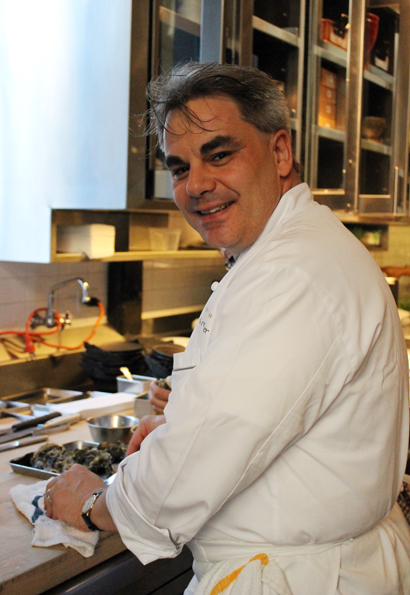 Chef Gabriel Kreuther of The Modern in New York City.

This week, Saison added even more luster — if that’s possible — by hosting five renowned chefs, each cooking alongside Skenes on a different night to create a 12-course tasting menu for a spendy $500 per person.

Tuesday, it was Chef Laurent Gras, formerly of L20 in Chicago and the Fifth Floor in San Francisco. Thursday, it was Chef Matthew Lightner of Atera in New York City. Tonight, it’ll be Chef Guenter Seeger, who owned Seeger’s in Atlanta. Saturday will wrap up with Chef John Shields, previously of Town House in Virgina.

I was lucky enough to be invited as a guest of the restaurant at the Wednesday dinner that featured Chef Gabriel Kreuther of The Modern in New York City. 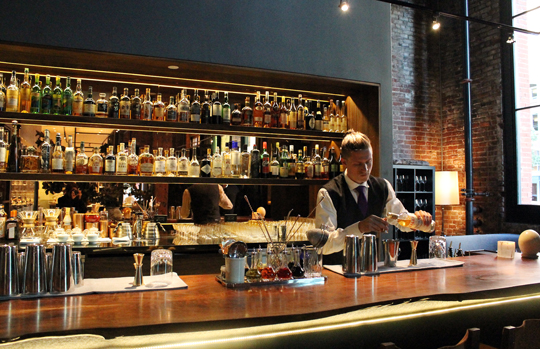 The bar at the entrance. 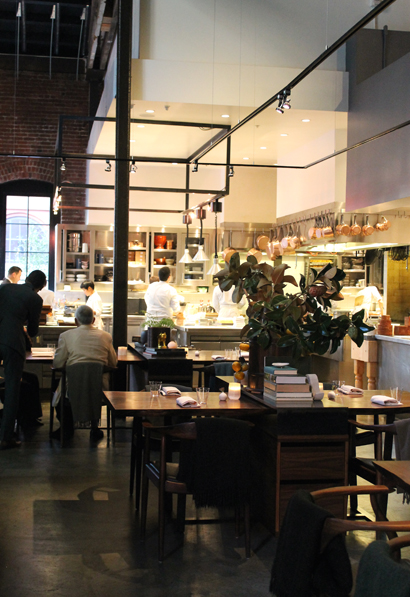 The long dining room with the open kitchen at the back. 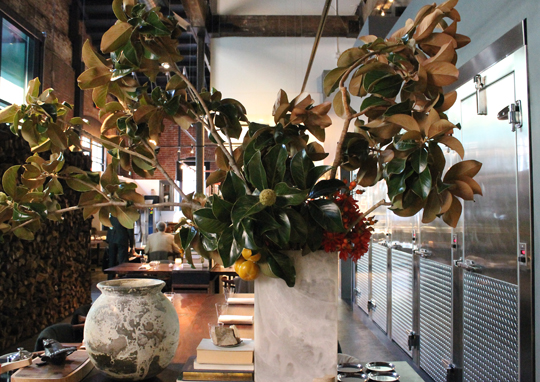 The bank of refrigerators that flank tables in the dining room.

Dining at Saison is a unique experience, most notably because the large kitchen is not only completely open, but the tables are mere steps away. A wall of refrigerators, their thermostats set at different temperatures, flanks one side of the dining room, so periodically, you might see a cook open the door of one to reach inside for additional ingredients. What’s also striking is just how calm and quiet the kitchen is. Even with two head chefs in the kitchen that night cooking a medley of courses, it seemed as if every movement was effortless.

In place of the former jeans attire, servers are now spiffed up in slim-cut gray suits. In a nod to Skenes’ penchant for a more relaxed dining atmosphere, though, his favorite ’80s tunes can be heard emanating from speakers in the kitchen. So, you’ll enjoy a little Steve Winwood, Elton John and Bruce Springsteen with your meal. 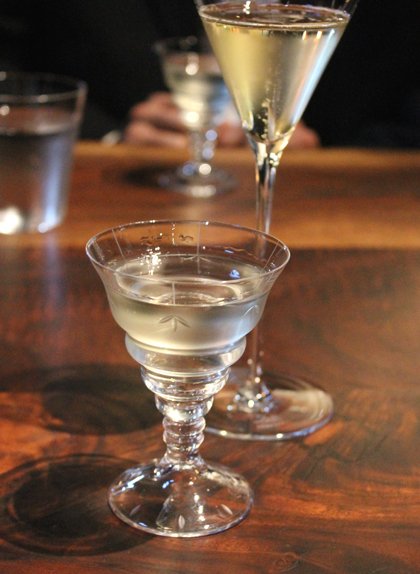 Dinner began with an aperitif of sake that had been infused with Japanese seaweed. I’d never tasted anything quite like it. It’s floral and almond-like as it hits your palate, then finishes almost mushroomy.

Skenes started off the night with a dramatic white dish with the tiniest divot to hold a treasure of white sturgeon caviar atop a bed of intense tasting grilled tomato gelee, creamy corn and okra. The gelee almost surpassed the caviar as the star of the dish with its smoky, sweet, acidic tomato brightness. 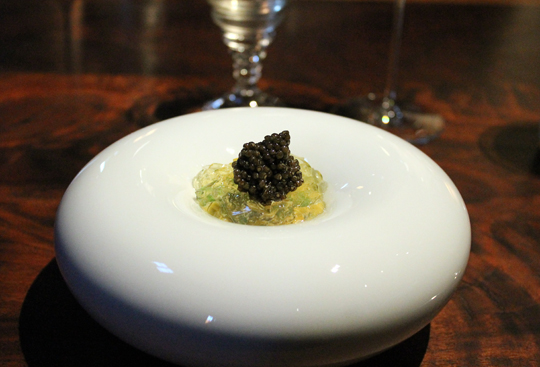 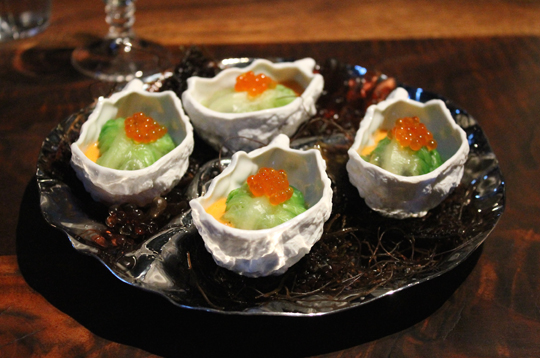 Kreuther’s first dish was a stunner, too: tiny cabbage parcels, each snuggled inside a porcelain replica of a oyster shell. Bite into it to find the surprise burst of briny plumpness from the oyster within.

Tomatoes starred again in Skene’s Sungold tomatoes with smoked tomatillo consomme. He is incredibly deft with broths — creating delicate pools of liquid that look so weightless yet carry a load of complex flavor. 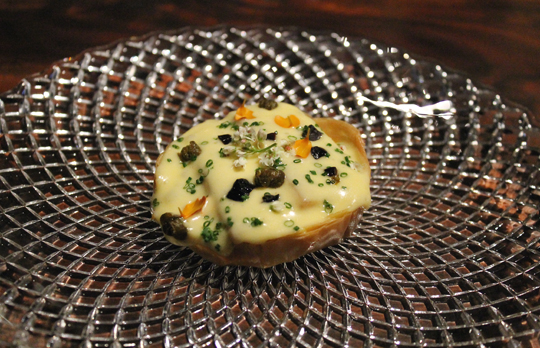 A glass dome covers Kreuther’s next dish as it’s brought to the table. When it’s lifted, you smell the applewood smoke that was used to smoke the sturgeon in his Alsatian sauerkraut tart that arrives with a center as creamy as pudding. It’s haute comfort food that you can imagine eating in front of a fire place, albeit at a four-star hotel in the Alps.

Monterey abalone has never been so tender and completely void of any chewiness as in Skenes’ next dish. The abalone is grilled for less than 2 minutes over embers. Then it’s served with artichokes, pickled kelp and a broth made from the abalone’s liver, which gives it a heightened umami note. 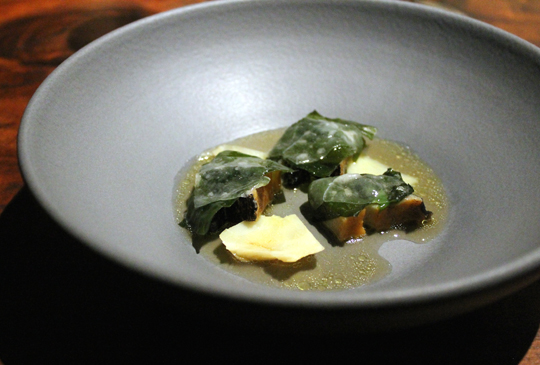 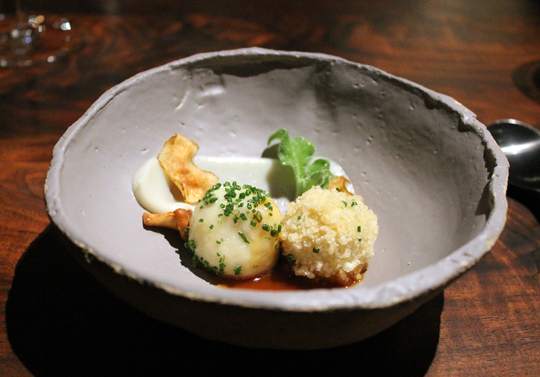 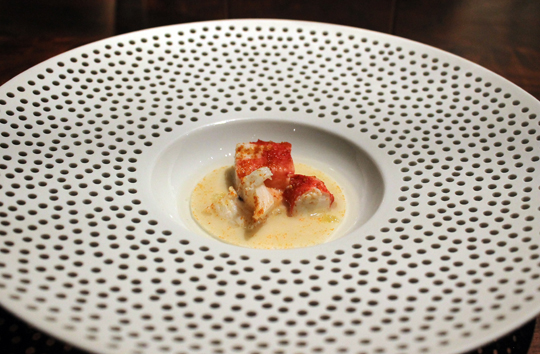 Kreuther’s Alsatian dumplings have a gossamer pasta-like exterior and a fluffy filling of rabbit. A swipe of sweet, nutty sunchoke puree, a tiny ice plant and chanterelles round out the satisfying dish. 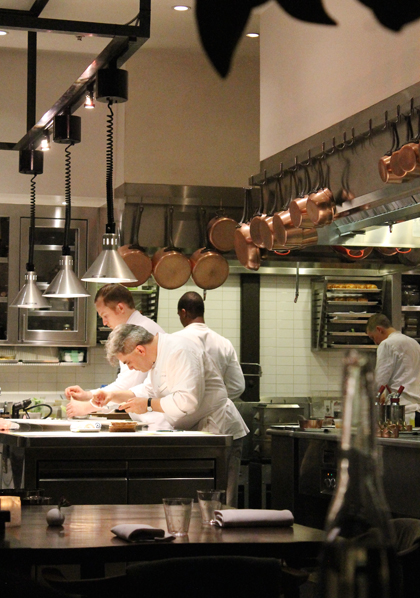 The two chefs assembling a dish.

I’ve never been much of a fan of king crab. Maybe too many bad Las Vegas buffet experiences have dimmed my opinion. But in Skenes’ hands, I finally discover the appeal of this crustacean. The flesh, poached in sea water, is pillowy. A broth of blood limes, ginger and yogurt is so fragrant and reminiscent of the flavors of a Thai lemongrass-infused soup.

Half a dozen Parker House rolls arrive next. It takes everything in me not to inhale them all because they are warm and soft as can be. Alongside is house-churned Straus butter that has a bit of lovely funk with its almost cheese-like taste. 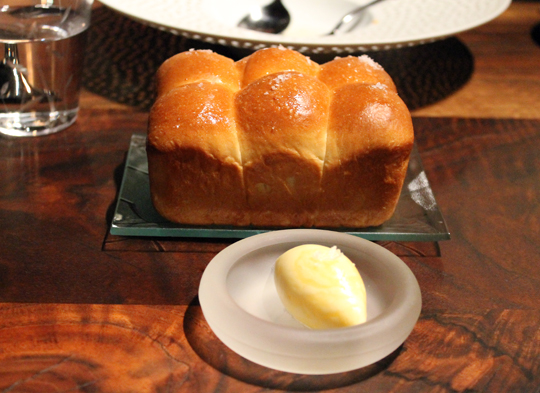 Bright made a run to the airport bright and early that morning to pick up the main ingredient in Kreuther’s next dish: langoustines flown in live from Scotland. The body meat is finished with a smoky chorizo sauce. The teeniest radish and turnip, complete with their greens, are there to be dipped in the kohlrabi puree. Suck out the juices from the langoustine head and you’ll be rewarded with a warm towel from the server for your efforts. 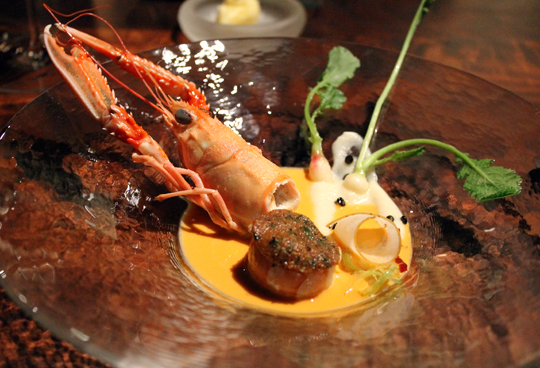 Langoustine flown in that morning from Scotland.

Skenes’ next dish looks like dessert with its head of cappuccino-like foam, but it’s not that at all. Not when it has beer, milk, bread and duck liver with an airy mousse-like texture. Take a taste and it’s a little sweet, a little savory, and almost coffee-toffee-like. 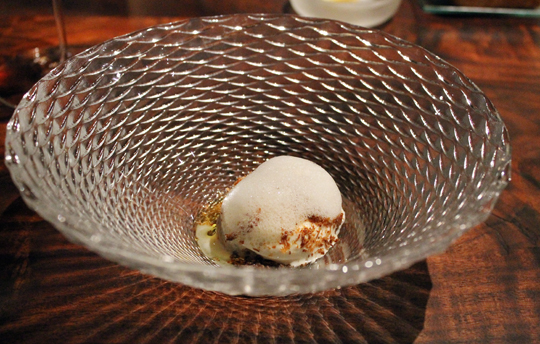 Dessert? Nope, not yet. 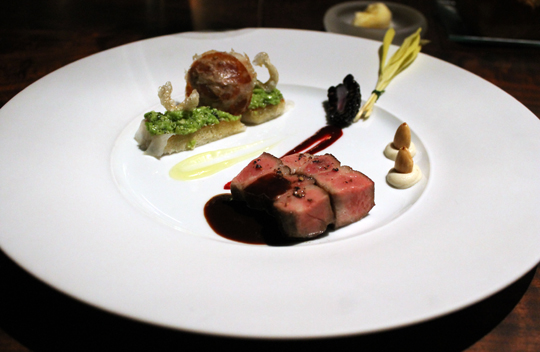 Kreuther finishes the savory courses with Mangalitsa pork neck. My husband was speechless for the first two two bites, only managing to murmer, “Mmmm” and “Ohhh” before cutting off another morsel. The heirloom pork was rippled with fat, which tells you all you need to know about how good it was. After all, fat is flavor. And this had that in spades. Curlicues of the tiniest chicharrons shattered in one bite. A round ravioli had a clever wrapper of the thinnest slices of soppresseta that had been crisped up to almost resemble pastry on first glance.

Then, it was on to sweets. Not one, not two, but a parade of them. First, a raspberry marshmallow sorbet swirled into a mini beehive that hid a center of Meyer lemon curd for a zingy palate awakening. Next, a study in buckwheat: The most perfectly shaped quenelle of buckwheat ice cream sprinkled with toasted buckwheat arrived with a puffy buckwheat souffle. You puncture the souffle and drop the ice cream into it. The result is the flavor of Japan in a French dessert. It’s toasty, nutty and slightly earthy, and refreshingly restrained in sweetness. To cap it all off, a server comes by to pour cups of hot toasted buckwheat tea. 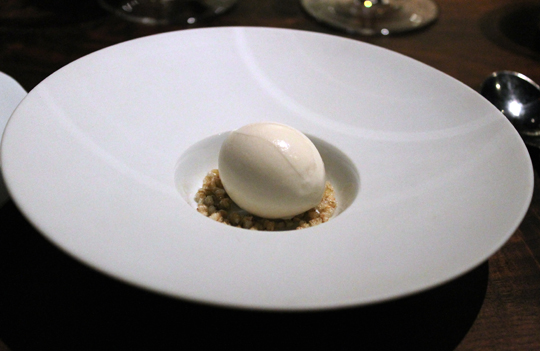 That was followed by one-bite tartlettes of passion fruit and milk chocolate sprinkled with chives. I can’t say I necessarily tasted the chives in the chocolate, but the pairing was inventive. 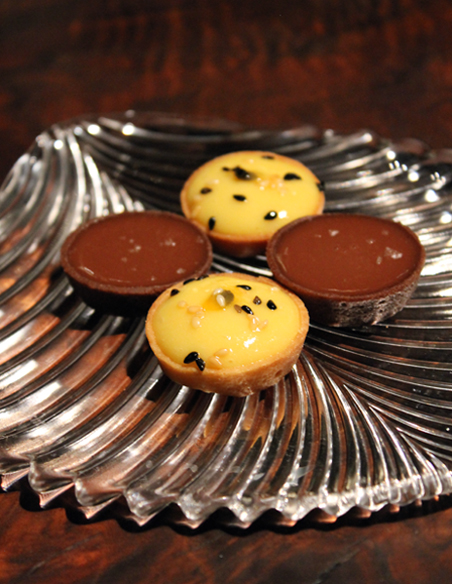 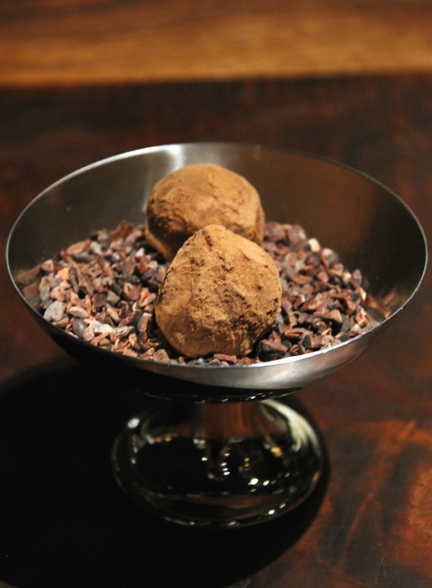 And truffles that absolutely positively have to eaten in one bite.

Molten truffles must be eaten in one bite, lest you end up wearing some of it on your chin. The craggy, chocolate exteriors are as thin as can be. But instead of thick ganache inside, there is a completely liquid center of vanilla that floods your mouth. Wow.

Sizeable caneles arrive in a box that smells delightfully of cinnamon. The pastries have that wonderful, deeply caramelized, crisp exterior that gives way to a custardy, bread pudding-like interior. 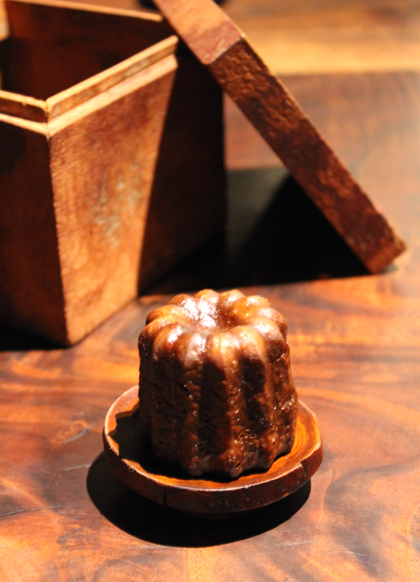 Caneles in a fragrant cinnamon box. 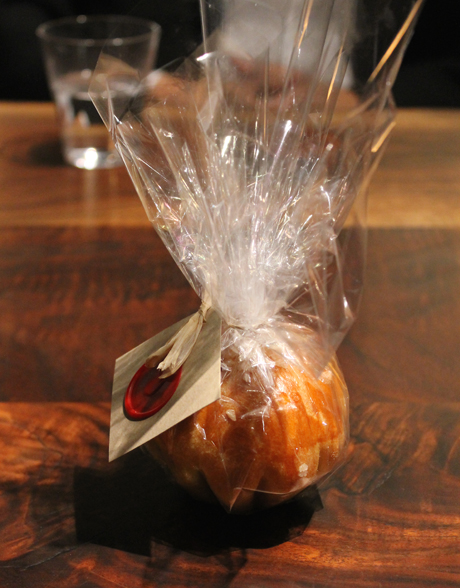 A treat to take home.

Before you depart, a fancifully wrapped brioche is delivered for you to enjoy for breakfast the next morning. The cellophane is closed with a red wax seal bearing the design of a flame.

Because at Saison, they are masters at heating up the dining scene. 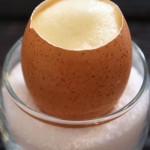