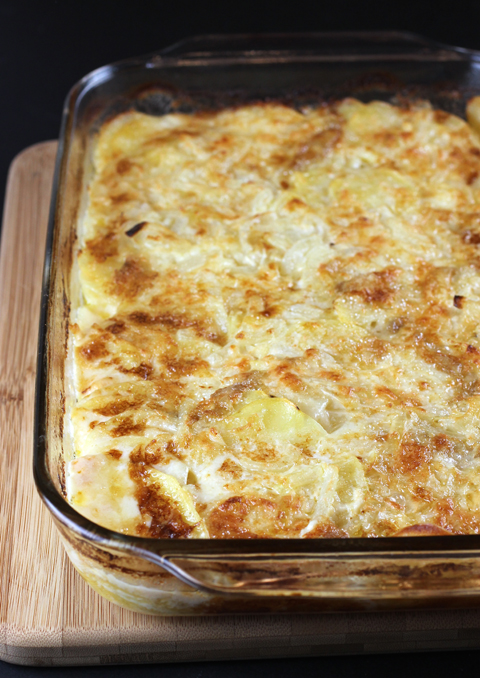 A luxurious potato gratin made with an award-winning cheese.

To know California cheese is to know Cowgirl Creamery.

Conley, an alum of Chez Panisse in Berkeley, and Smith, who helped found the iconic Bette’s Diner in Berkeley, got the notion to make cheese after working on their days off at Straus Family Dairy, where they fell in love with the lush organic milk and its distinct nuances from season to season.

Wanting to help local dairy farms that were going broke, the two set about to create a way to showcase that wonderful milk in value-added products.

Today, Cowgirl Creamery crafts some of the state’s most extraordinary cheeses. It boasts a cheese shop and restaurant, Sidekick Cafe & Milk Bar, both in the San Francisco Ferry Plaza. It sells at five farmers markets in the Bay Area.  And its original creamery and cheese shop, Tomales Bay Foods at Point Reyes Station, still remains a must-stop for any visitor to West Marin County. 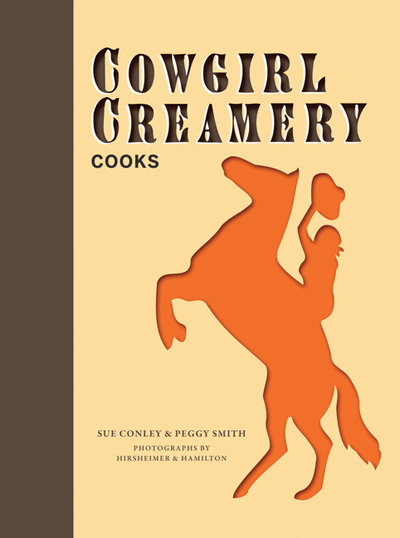 There are recipes galore for everything from their beloved grilled cheese sandwich to making your own fromage blanc at home. Moreover, the book is imbued with delightful stories about how their business came to be. Additionally, there are  tips on creating a balanced cheese course, how to properly store cheese at home, and answers to whether you are supposed to eat the rind on cheeses (the French don’t for the most part, but Conley and Smith do).

With holiday entertaining on the minds of all of us, I couldn’t resist trying the recipe for Red Hawk Potato Gratin.

Red Hawk is the fifth cheese Conley and Smith came up with — and their first washed rind one.

This cheese was the result of a happy accident when making a batch of their Mt. Tam. Instead of the expected fluffy texture, it turned out more gooey and with a flavor that is rich, kind of savory and extremely creamy. It has a little funk on the nose, but a sweet-cream-like finish.

In 2003, Red Hawk won “Best of Show” at the annual American Cheese Society competition. It was the first time a washed-rind cheese had garnered that honor. 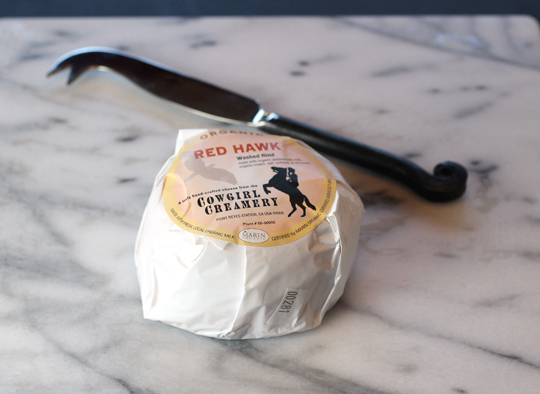 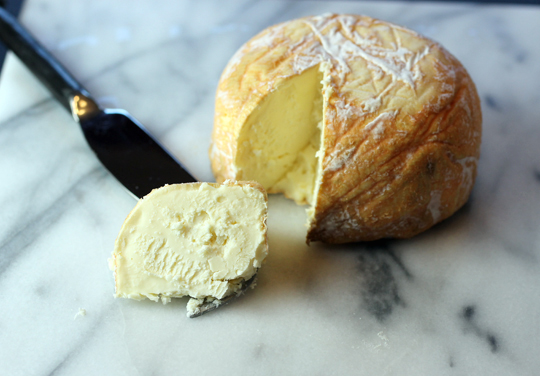 The cheese, about $20 for a round, is the star of this potato dish.

Have you ever had the pleasure of dining at a high-end restaurant, where your luscious portion of lamb or beef is served with a dainty little brick of creamy, layered potatoes? At first you think it a rather modest portion. But when you dig your fork into it, you realize how appropriate it is, given how very rich it is. It’s as if the potatoes have soaked up all the cream and cheese they can possibly hold.

That’s what this Red Hawk Potato Gratin is like.

The Red Hawk gives the dish a little more depth. But it’s not so assertive a cheese that it will frighten off less adventurous eaters.

After baking, you may find a puddle of liquified fat at the bottom of the dish, as I did. It’s a tell-tale sign of how rich this dish is. When I make it again, I think I may add another 1/2 pound of potatoes (bringing the total to 2 1/2 pounds then) to help soak up that excess. I also seasoned the onions with a pinch of salt, which was not part of the original recipe.

In the book, Conley and Smith point out that this recipe is the one most requested by their customers.

One bite and you’ll understand why. 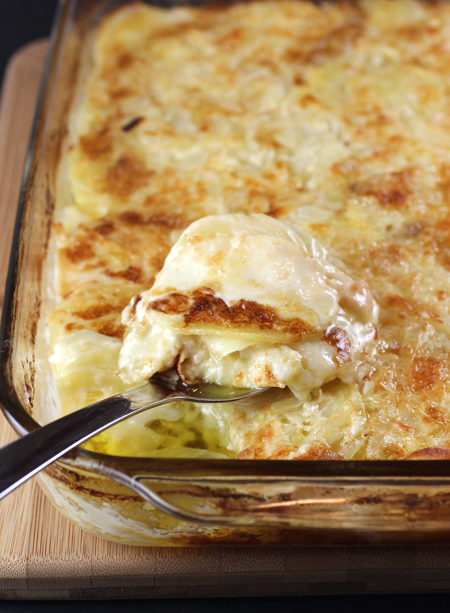 A little goes a long way.

Preheat oven to 350 degrees. Heat a cast-iron skillet or saucepan over medium-high heat. Add butter and olive oil to the pan. When the butter has melted, add the onion and garlic, and saute until soft, about 5 minutes. Season with salt to taste. Take the pan off the heat and add the cream and half of the Parmesan.

Cover the dish with aluminum foil and bake for 45 minutes. Remove the foil and bake until top is browned and bubbly, about 30 minutes. Let the casserole cool for 10 to 20 minutes. Serve while still warm. (This can be made a few days ahead and stored, tightly covered, in the fridge if you like. Reheat, covered, at 350 degrees for about 10 to 15 minutes.) 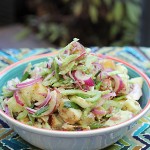 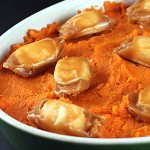 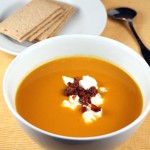 And: Sweet Potato and Cumin Soup with Feta Yogurt 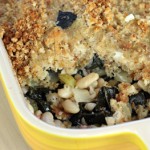