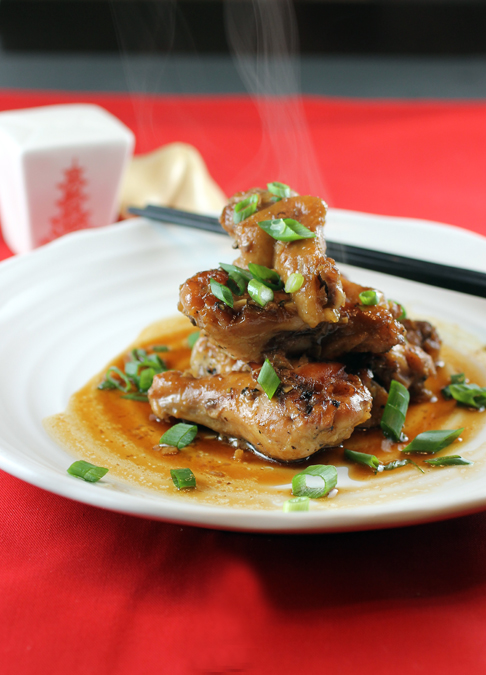 Steaming soy sauce chicken wings — straight out of the oven after a long, gentle bake.

When it comes to cooking, culinary teacher Andrew Schloss wants us to take it low and slow.

Think meatloaf that takes up to eight honors in the oven or a Black-Bottom Banana Custard Pie that bakes for as long as six hours.

Before you scoff, though, consider that all of that is fairly unattended cooking. Slide it into the oven and go about your day. Meantime, all that extended time under gentle heat does its magic by rendering food soft, supple and suffused with flavor.

You’re essentially turning your oven into a giant slow cooker. But unlike a slow cooker, which has a tight-fitting lid, oven-cooking allows for more evaporation. That means flavors get much more concentrated, Schloss says.

I’d have to agree after receiving a review copy of his book, “Cooking Slow: Recipes for Slowing Down and Cooking More” (Chronicle Books). Many of the recipes intrigued, but I decided to try one already familiar to me to get a real sense of what a difference this style of cooking might make.

“Spicy Soy Chicken Wings” reminded me on first glance of the chicken wings found on so many Chinese restaurant menus or in steam trays at Chinese take-out delis. Only this version gets a little kicked up with spice from a dash of cayenne and chili powder.

The recipe couldn’t be easier. You just salt and pepper the chicken wings (I used drummettes), and leave them overnight in the fridge. The next day, bake them in a glaze of soy sauce, brown sugar, sesame oil, garlic and the two hot pepper powders for three hours at 225 degrees. Then, brown them quickly on high-heat for the finishing touch.The recipe neglected to say whether to remove the foil from the pan of chicken when browning them. But I assumed that was necessary, so I took it off. If you have a green onion on hand, you can garnish the wings with slivers of it, as I did just before serving.

How different are these wings? The taste is familiar, but a little sweeter and spicier than standard Chinatown ones. The texture is the true telling point. Pick up a wing with your fingers and take a bite. No gnawing or tugging with your teeth required at all. Instead, the juicy, tender meat pulls off the bone effortlessly as if it were never attached to one.

This way of cooking may not be practical every day of the week. After all, there are times when we’re all in a hurry to eat.

But other times, it’s sure worth it to take it slow.

Combine the chicken wing pieces with a generous amount of salt and pepper in a large zippered plastic bag. Close the bag tightly and refrigerate for at least 12 hours or up to 24 hours.

Preheat the oven to 225 degrees. Transfer the chicken to a baking dish in a single layer without crowding.

In a small saucepan, stir together the soy sauce, brown sugar, sesame oil, cayenne, chili powder, and garlic, and heat to a simmer, stirring to dissolve the sugar. Pour over chicken. Cover the baking dish with aluminum foil and cook until the chicken is nearly falling off the bone, about 3 hours.

Raise the oven temperature to 450 degrees and remove the foil from the pan of chicken. Continue baking until the chicken browns and the sauce thickens into a glaze, about 10 minutes longer. Watch carefully near the end of the cooking time to avoid burning. Toss the wings in the sauce to coat and serve.

Variation for Cooking in A Slow Cooker: Follow the recipe, cooking the chicken in a 6-quart slow cooker on high for 3 to 4 hours, instead of a baking dish in the oven. When the wings are cooked through, transfer to a bowl. Simmer the sauce with the lid of the cooker off until it thickens, about 10 minutes longer. Toss the wings in the thickened sauce and serve.

From “Cooking Slow” by Andrew Schloss 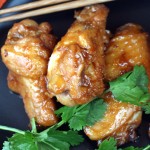