Endive braised with gorgonzola that can top so many different things.

Every winter, when I get a “bouquet” of endive from California Vegetable Specialties,” it’s always a welcome delivery.

That’s because it makes me rediscover how versatile this year-round vegetable is.

Europeans consume as much as 15 pounds per year of endive. But Americans? We partake of a mere ounce a year.

I admit I often don’t do much better than that, myself, reaching for the slender white or red chicory occasionally to spiff up salads for company.

The Rio Vista company is the only producer of endive in the country. And yes, that’s “on-deev,” in the French manner, which are grown in the dark.

But there’s so much more you can do with endive than just separate the leaves to toss into salads.

“Braised Endive with Gorgonzola” is one example. This incredibly simple recipe is from “Vegetable Literacy” (Ten Speed Press), of which I received a review copy. It’s by Deborah Madison, former chef of Greens in San Francisco, and expert on vegetable-based cooking. It includes more than 300 recipes for 12 different plant families. She gives fascinating insight into what vegetables are related to one another, how to use the entire vegetable, and best flavorings to use with each.

This recipe is ready in a mere 10 minutes. Endive heads are chopped, then sauteed in butter with heavy cream and crumbled gorgonzola to create its own luxurious sauce. A squirt of lemon cuts the richness and tames the bitterness of the endive even more. And a sprinkle of fresh herbs adds color. 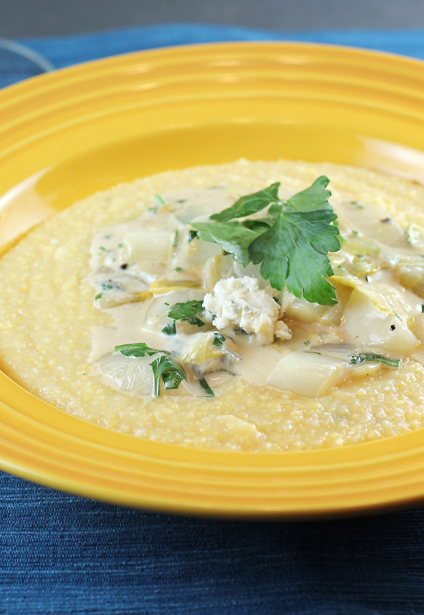 So tasty for being so easy.

The only change I made to the recipe is to double the amount of everything because I thought that two endives for two servings was a little skimpy.

Enjoy this lush combination spooned over polenta, as I did. Or atop crostini. Or increase the recipe amounts even more and toss with warm egg noodles.

The possibilities are endless — much like with endive, itself. 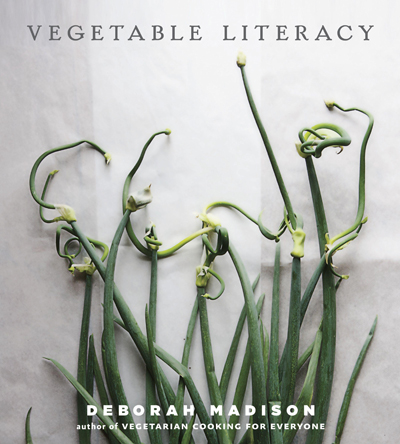 Crumbled Gorgonzola or other blue cheese, a few ounces

Halve the endives lengthwise, then chop them cross-wise into 1-inch pieces. Melt the butter in a skillet over medium heat. Add the endive, season with a few pinches of salt, squeeze over the lemon juice, and cook, turning frequently until softened, 8 to 10 minutes. It’s hard to tell just by looking, so take a taste. Add the half-and-half, let it bubble up over the endive, then simmer for 1 minute. Turn off the heat, crumble the cheese over, and season with pepper, add the herb, and serve. 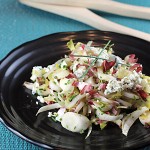 More Endive Goodness: Tangle of Radicchio and Endive with Chives and Maytag Blue 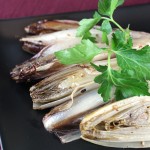 And: Roasted Endive with Sherry Vinegar 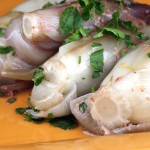 And: Braised Endive in Mustard Vinaigrette

tagged with Deborah Madison recipe, endive recipe, how to cook endive, how to use endive, Vegetable Literacy recipe
Print This Post