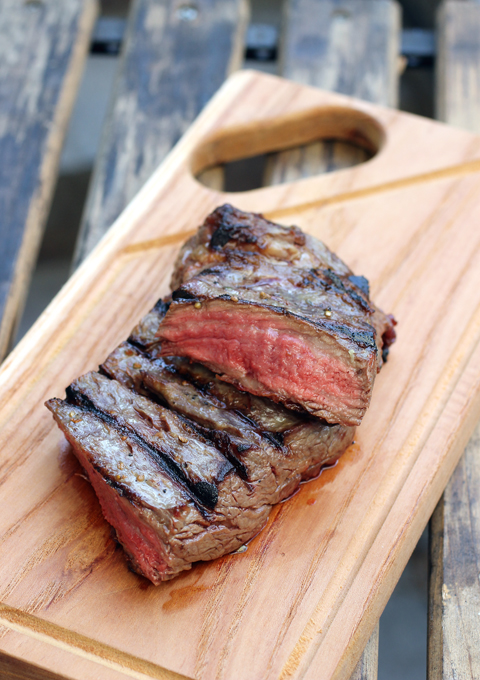 For the past seven years, almost all of Snake River Farms’ entire supply of ribeye cap — its premier cut of American Kobe beef — has gone to one restaurant.

That tells you just how magnificent this cut of beef must be.

Thanks to an uptick in production, though, that same cut is now available to the public, starting this week on the Idaho-based specialty meat company’s Web site.

Yes, you can cook up the same exquisite cut of beef used at one of the finest restaurants in the world.

It won’t come cheap, of course.

That hefty price will get you approximately 1.5 pounds of beef. That’s enough for at least four servings. Just know that a little goes a long way with this meat. Even avowed steak-a-holics will not be able to eat nearly as much they normally would. That’s because of the intense marbling of this beef, which is in a whole ‘nother stratosphere than even Prime, the highest USDA grade. The “Black Level” is streaked profusely with white fat. the “Gold Level” has even more of it, hence the higher price.

I had a chance to try a sample of the “Black Level.” Like all Snake River Farms beef, it’s shipped frozen.

Snake River Farms cuts off the top part of the ribeye, which consists of a fat layer with a slender amount of flesh underneath, to create its ribeye cap. It’s essentially the fatty outer part of a prime rib roast.

Get a a load of the marbling in this meat.

This cut is best served medium-rare at most. You want to get the internal temperature to at least 120-125 degrees so that the intramuscular fat starts to melt. But you don’t want to cook this to well-done because it will toughen, leaving it ruined.

Let the meat come to room temperature for at least half an hour before you cook it. Season with salt and pepper. Cook it either in a very hot cast-iron pan on the stovetop or on a grill. Because it’s thin, it cooks fairly fast. It may need only 2 minutes on each side. After removing it from the grill, let it rest for about 5 minutes before cutting into it.

Then, prepare to experience meat butter.

That’s exactly what it’s like. It’s sublimely tender, juicy, unctuous and seriously coats your entire mouth with fatty goodness. You know how a piece of bread spread liberally with soft butter just fills your mouth with a slick of richness? Imagine if it were beef-flavored butter and you get the gist. A glass of Cab or Malbec with nice tannins is the perfect accompaniment.

It’s not an everyday meal, that’s for sure.

But it is easier to obtain than a reservation at The French Laundry.