A Sauce for Salmon That’s a Pure Taste of Sunshine 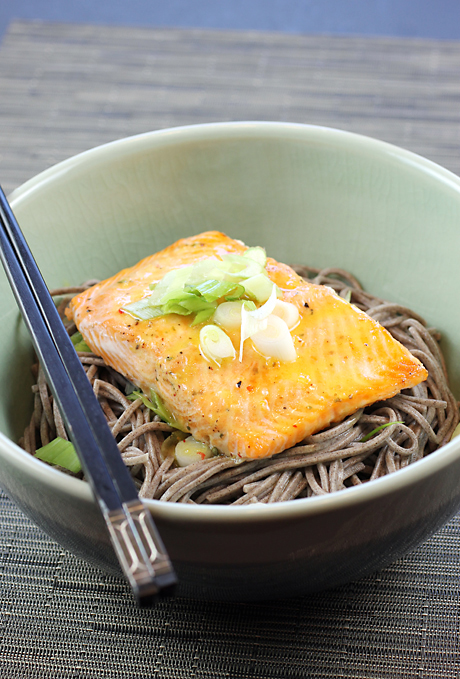 What do you get when you cook down fresh orange juice with lime juice?

The makings for a simple, sublime sauce that’s perfect for most anything.

The recipe for this easy “Citrus Sauce” first appeared in Everyday Food in September 2004. After cooking down the citrus juices, whisk in a little sugar, olive oil and Dijon mustard. That’s it.

You end up with a really bright tasting sauce that’s light yet punchy. I spooned it over grilled wild King salmon laid over a bed of soba noodles and garnished with cucumber and cilantro. The sauce would work just great on grilled shrimp, too, strewn over a bed of crisp greens. Or on grilled vegetables or roasted chicken.

It’s a sauce sure to add a little more oomph to so many things in your repertoire. 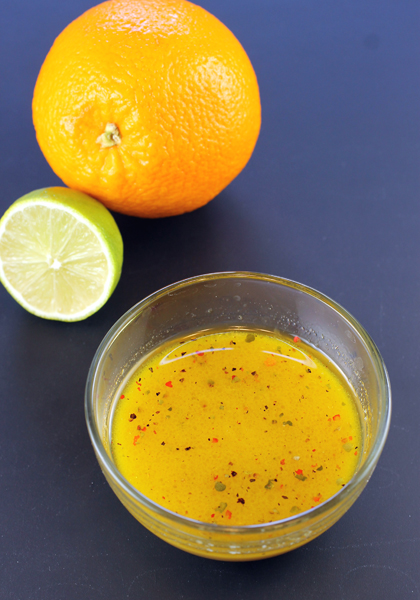 The sauce — with a fresh grind of black, pink and green pepper.

WINNER OF THE FOOD GAL CONTEST: In last week’s Food Gal contest, I asked you to tell me the seasonal item you most look forward to — and why. Best answer wins a $250 gift card from Anderson Seafoods.

Edie, who wrote, “In the Netherlands we celebrated the coming of white asparagus, the queen of veggies as we call it, in April with a lots of festivities. And when they’re almost to an end (on June 24th), we’ve already celebrated the coming of the Dutch herring. Eaten raw, ‘fresh from the knife’ at the fishmonger, you hold the fillet at the tail and eat it standing, while you ‘throw your head in your neck.’ If you get the picture. (Sorry, never thought about writing about it in English..) Some people eat it with fork and knife though…
My Grandmother never ate on the streets, with exception of the Dutch herring! Well, that’s says enough, right?”