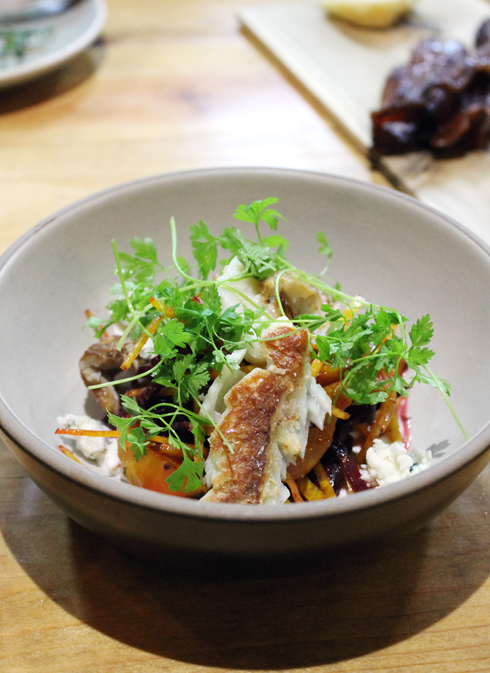 “Beets & Butterfish” — one of the delights on the ever-changing menu at the new Orchard City Kitchen.

It’s been a long two years in coming for Chef Jeffrey Stout.

The former opening chef-partner of Alexander’s Steakhouse in Cupertino, Stout was let go rather unceremoniously back then from that establishment, where he earned a Michelin star and maintained that rating for three years.

He set about to start over — this time with a more casual-style of dining with eclectic small plates that he could really put his own spin on.

The result is the wonderful new Orchard City Kitchen that opened just two months ago in Campbell’s Pruneyard. Last Wednesday night, the lively dining room was packed, a promising sign for a restaurant that has not done any marketing or public relations work. Indeed, Stout says he’s averaging over 200 covers a night already. Chef-Owner Jeffrey Stout in the kitchen.

It’s easy to understand the restaurant’s appeal. It’s a come-as-your-are kind of place with favorite cookbooks and a Japanese Lucky Cat decorating shelves, and bare wood tables with a nifty bracket underneath to slide your wood board-backed menu into when you don’t need it anymore. A glass-fronted walk-in is visible at the back of the restaurant, lined with fresh fruits and veggies for all the world to see and to emphasize Stout’s farm-to-table philosophy. White subway tiles line the large open kitchen that Stout jokes is the “most open open-kitchen” there is because of the fact that the floor-to-ceiling, retractable windows opposite it in the dining room can open up and fold back completely, giving passersby a front-row view of the cooks at work.

My husband and I paid our own tab last week, but Stout sent out a couple of freebies that he especially wanted us to taste. 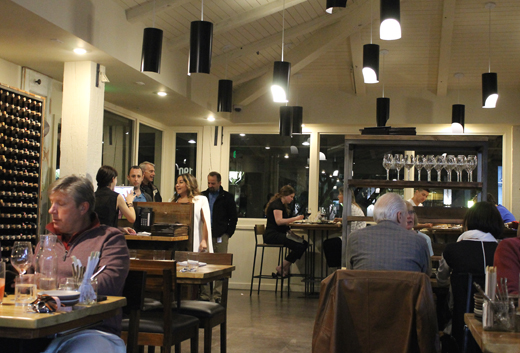 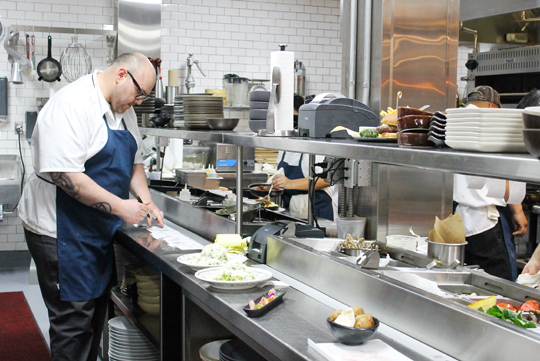 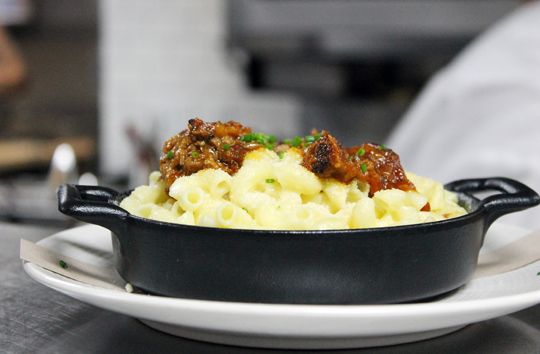 Macaroni and cheese topped with barbecued brisket about to get served.

Do start with a cocktail. Stout has bragged that he’d put Bar Director Perry Hewitt’s creations up against any mixologist in the Bay Area. Those aren’t just fighting words, either. The 5th Element ($12) was a clever blend of rye, kumquat, coriander soda and Royal Tokaji. Hewitt likes to use sweet wines such as the latter and Madeira in place of the usual simple syrup in cocktails to give them a more interesting and complex taste. Mine was big on orange and warm spices, and beautifully balanced. 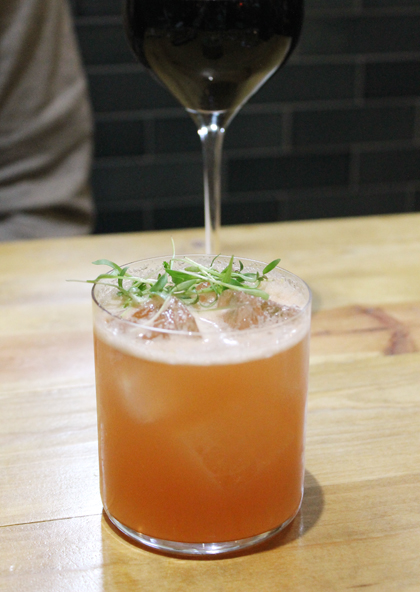 Lava lights at the bar. 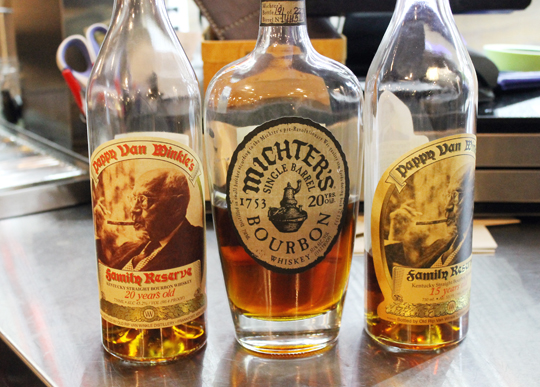 OCK, the nickname acronym that the waitstaff sports on their T-shirt uniforms, even boasts a supply of the elusive Pappy Van Winkle bourbon, not easy to source on a normal basis, but even more so when you are a brand-new restaurant. Stout and Hewitt slyly say they were fortunate enough to have the right connections. Even if you wanted to pony up the big bucks to try it here, though, you are out of luck. The prized bourbon has already been pre-sold to a small group of customers. For consolation, you can at least gaze at the bottle, high up on the top shelf.

Although there are some large plates at OCK, the menu is primarily small plates meant for sharing.

It’s dangerous to sit near the open kitchen — because you get a grand view of all the dishes coming out. No doubt, you’ll end up flagging your server down to add something more to your order as we did when we spied a plate of biscuits ($6) going out. Soft and buttery, they come on a slab with a dab of honey butter. It that wasn’t enough, they also come alongside two thick, very caramelized pieces of bacon. This is breakfast for dinner in the best sense. 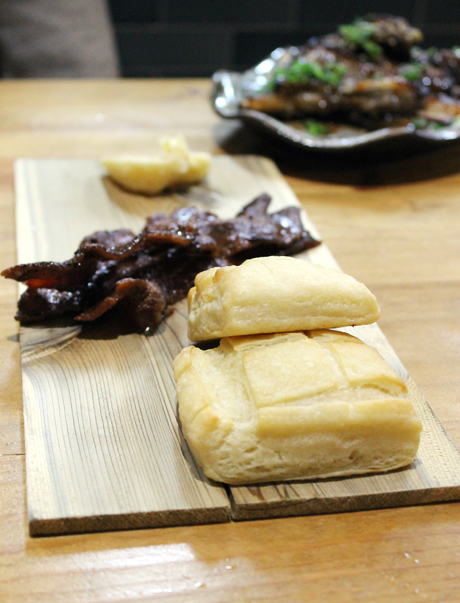 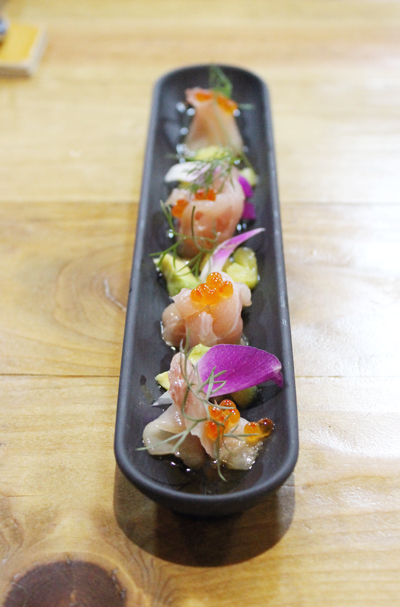 Slivers of raw hamachi ($12) come curled up on a slender, long plate and garnished with grilled pineapple relish and smoked trout roe. At first, the truffled ponzu might seem over the top. but the truffle adds an earthy umami that lends greater depth to the sweet, clean taste of the fish.

I’d come back again and again just for the Korean fried chicken ($11) with shishito peppers and that fiery Korean paste, gochuchong. Boneless, tender pieces of chicken are battered and fried till crisp, before getting coated in a sticky sweet-spicy sauce. If you are a native San Franciscan like myself, eating this chicken may have you reminiscing about the fabled fried chicken at the old Kam’s restaurant. It has similar flavors to that one, which garnered that outer Richmond restaurant a following for years. 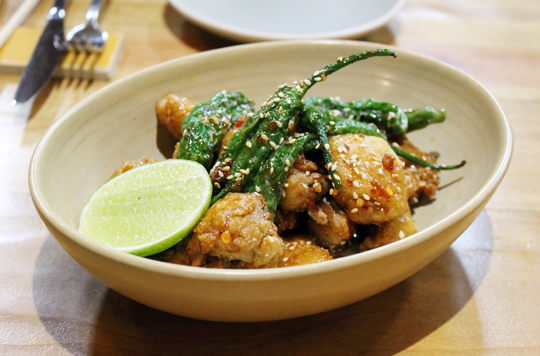 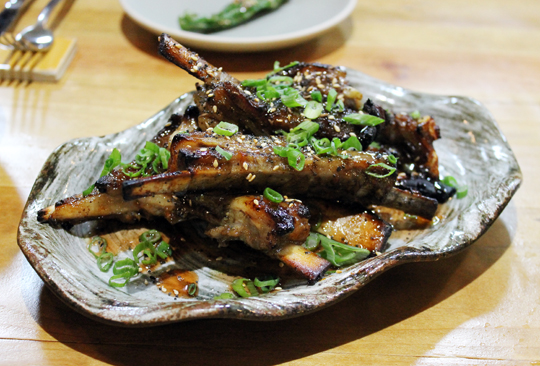 You don’t often see lamb riblets ($17) on a menu, which is a shame because they are so luscious, tender and juicy when cooked properly as they are here at OCK. Pick them up with your fingers and go to town, tearing off the meat that’s glazed with tamarind and a mix of seeds. Stout says it’s his take on an everything bagel — Asian-style.

Roasted beet salad may be everywhere these days, but this version comes with a hit of fresh horseradish to really elevate it. “Beets and Butterfish” ($12) features pieces of smoked black cod over the top, giving this salad a nice smoky edge and more substance. Grilled King Trumpet mushrooms with a tapioca like no other.

Grilled King Trumpet mushrooms ($10) is another of Stout’s dishes that seamlessly blends the whimsy with the sophisticated. Slices of meaty mushroom get grilled with a little chili, then are laid out over a bed of tapioca made to taste like that Cantonese menu staple, West Lake beef soup. You can’t help but smile when you dig into this dish and hit the tiny, chewy tapioca balls that do taste of ginger and beef. It’s clever and way too fun.

The OCK burger ($16) is flavorful and juicy. It’ss dressed with Muenster cheese and grilled onions. Skinny fries, perfectly golden and crisp, are dusted with Shichimi, the Japanese spice mixture, and get a ramekin of Bernaise sauce for dipping into. House-made pickles cut into chunky pieces are super crunchy and fresh tasting. Caneles that aren’t even on the menu.

Stout makes caneles the traditional way — using the laborious method of baking them in copper molds that have to be treated repeatedly with bee’s wax so they not only release easily but provide the perfect texture of intensely dark caramelized exterior and custardy interior. They’re not even on the menu. But he makes them for fun to give out to select guests. We were so lucky that night as to enjoy them, served alongside a dollop of softly whipped vanilla cream and slices of tanquat — a cross between a tangerine and a kumquat. A total treat. 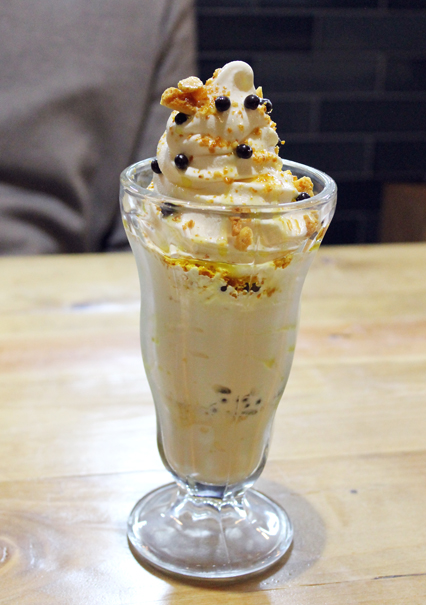 One of the most popular desserts has to be the soft serve ice cream sundae ($6) because I kept seeing them appear all night long at the pass. We couldn’t resist, either. A tall sundae glass is swirled high with mint soft serve. Dig around to find bits of honey brittle, chocolate balls, drizzles of Arbequina olive oil and flakes of fleur de sel. The brittle and balls add crunch to all that creaminess. The olive oil gives a lushness and the sea salt a balance so that this kiddie dessert veers more into adulthood.

The trouble with small-plates restaurants is that the plates start to add up and you often end up spending more than you had planned. But at OCK, that just can’t be helped. You want to try everything on the menu because it all just sounds so good. When you do, you find the food so satisfying, you pay the bill gladly — and start saving up so you can visit again very soon. 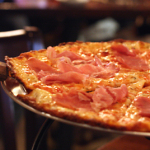 Another Campbell Restaurant to Try: Patxi’s