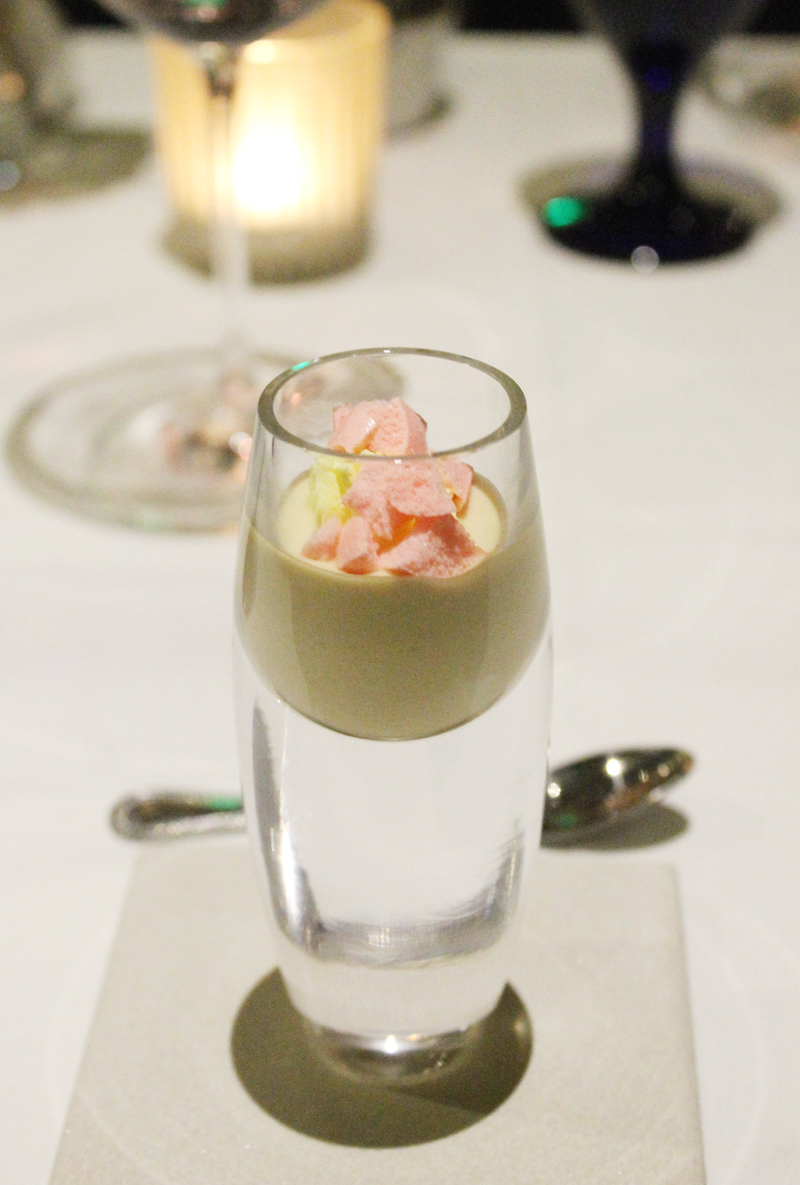 A pre-dessert at Ambience in Los Altos.

Ambience is a hushed restaurant in an even quieter downtown in sleepy Los Altos.

It’s so muted that I hadn’t even heard about the fine-dining restaurant until a few months ago, despite the fact that it’s been open for more than a year.

Chef Morgan Song runs the restaurant with his wife, who handles the front of the house. Song cooked in Sacramento and San Francisco for years, most notably at the acclaimed Kiss.

I was invited in as a guest of the restaurant on a recent Tuesday evening, when my dining companion and I were one of only six diners total in the dim dining room with its comfortable upholstered chairs and smoky glass windows that shield the view of the street outside. But that may owe to the fact that Ambience offers only one tasting menu a night ($149 per person with an additional $95 per person for wine pairings or $135 per person for premium wine pairings). After all, how many people can — or want — to devote three hours to eat in the middle of the week unless it’s for a special occasion? 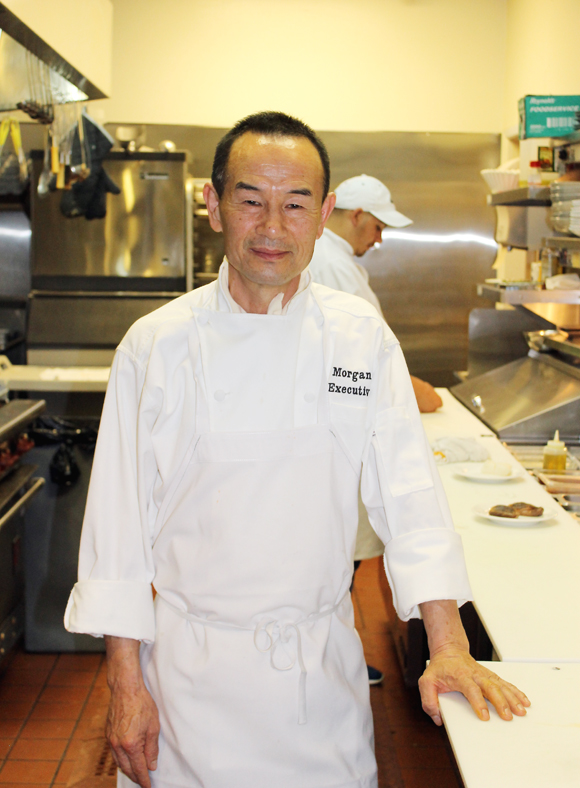 Chef Morgan Song in his kitchen at Ambience.

The tasting menu is officially about 10 courses. But dinner actually encompasses more than that, once the chef sends out a parade of amuses, plus often throws in a “surprise” course along the way.

First came a curl of the silkiest smoked salmon mousse crowned with golden trout roe. That was followed by a just-warm potage of potato truffle fortified with bone marrow. It was a tiny portion, which is plenty when you have a creamy soup this indulgently rich. 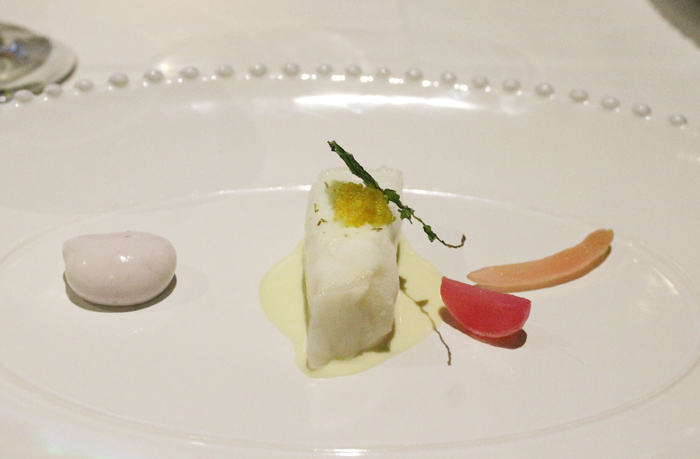 Scallop tataki, seared lightly leaving the interior still raw, was supremely sweet and succulent. It was garnished with the subtle heat of ginger coulis and pickled radish.

You can taste and see the attention to detail in all the dishes. These are not dishes of in-your-face assertiveness but of elegant delicacy. That’s no more evident than in the seared hamachi, served afloat in a deeply umami bonito broth with ponzu-wasabi sauce. After you devour the fish, drink up every last drop of the broth. It’s that heavenly.

Snowy white Chilean sea bass sits on a braised leek puree. Off to the side is what our server described as a “molecular egg.” Made of Japanese yam, the grayish, kidney-shaped “egg” reveals a slightly runny interior when you cut into it. It was one of the few missteps of the night, as it didn’t really add anything to the dish. Creamy, starchy and lacking much flavor, it was a novelty for novelty’s sake.

Tuna tartare with wasabi tobiko was much better. With a crunchy, thin crouton and pickled beets, it was a lovely rendition of a dish that can verge into sloppiness all too often these days at so many restaurants. A terrific tuna tartare — which would have been even prettier had I not started to eat it before taking this photo. 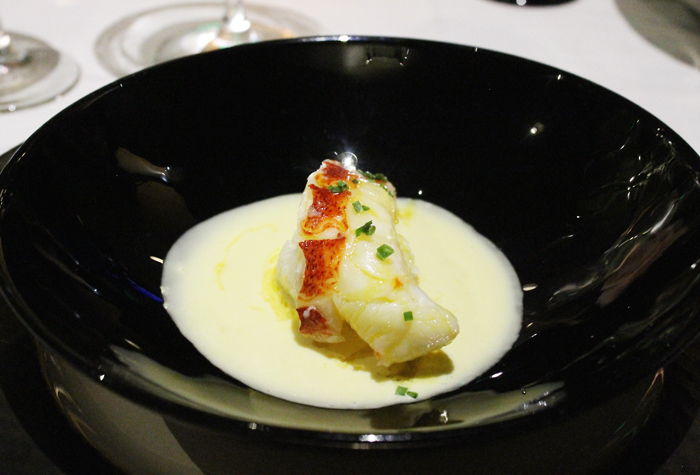 Butter-poached lobster is never a bad thing, not when the lobster meat emerges plump, tender and so luxurious.

That was followed by a fanciful martini glass of a palate cleanser. The puddle of deep fuchsia pomegranate consomme in the center was mixed with tiny pomegranate gelee cubes and tiny shards of ice, leaving it cold and refreshing, and with a range of textures. Speaking of textures, Song has a way with pates. His bonus course of poussin pate has to be one of the most dreamy takes on chicken liver pate I’ve ever had. It was so silky and creamy that it practically melted on the tongue. Pickled poached pear added a burst of acidity to balance it.

With the Kobe beef tartare, texture again played a key role. The tartare was so finely and precisely chopped that it gave the dish even more presence. Asian pear, herb bread crumbs and pine nuts, along with a sliver of black truffle, did this tartare proud. 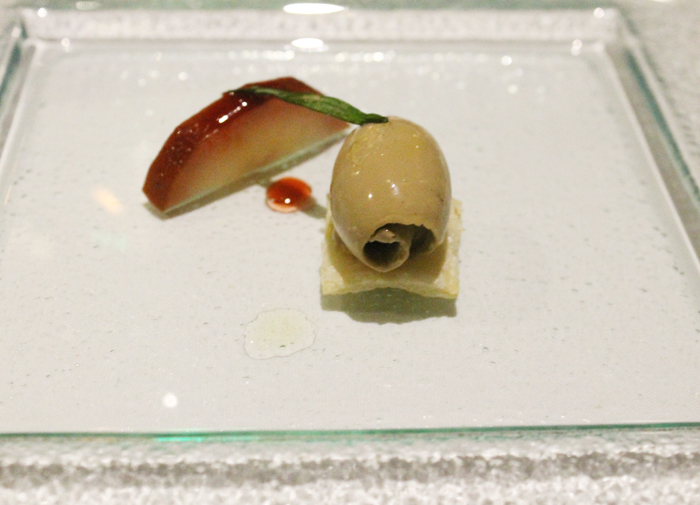 Venison tenderloin was incredibly tender and juicy, with a mushroom ragout that gave a woodsy feel to this dish. 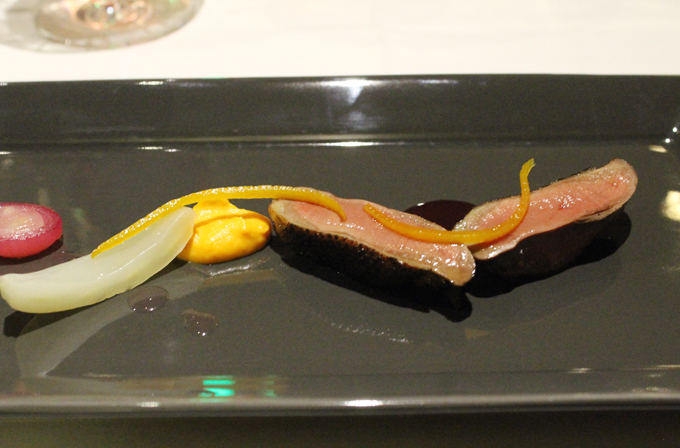 Venison tenderloin to swoon over.

A pretty, slender glass arrives next, cupping an espresso-lemon cream that’s topped with teeny shards of baked strawberry meringue. Creamy and crunchy with that back-note of coffee, it reminded me of a chic berry version of my favorite Blum’s coffee crunch cake from childhood.

Dessert is a play on chocolate. On the plate is a half moon of smooth truffle mousse, chocolate truffles, bright-tasting raspberry coulis, and a fancy red sugar coil. The mousse is airy and creamy, almost like a much, much better version of an U-No candy bar. 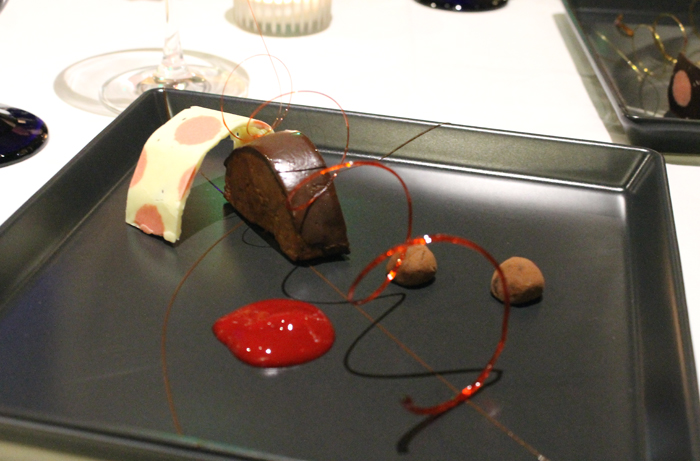 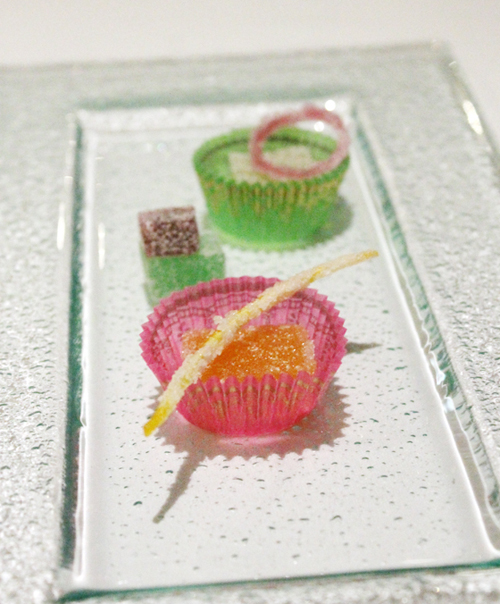 An assortment of pate de fruits.

The last bites come are pate de fruits: peppermint with pomegranate, apricot with orange peel and an uncanny peach with dried candied onion. The onion one was interesting, though, not necessarily memorable. If you ate it with the peach, it rather took over it. Regardless, the pate de fruits were for the most part just too sugary, as if maybe they needed to be coated in finer sugar or less of it, because instead of intense, individual fruit flavors all you tasted was sweet.

At the end of it all, you leave Ambience feeling cared for. So much so, that you can’t help but hope it gains a louder foothold in the future.