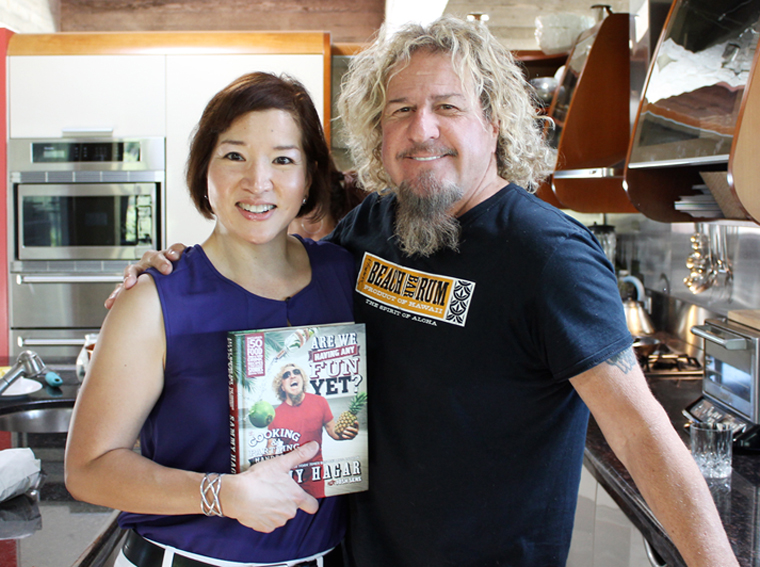 “I always wanted to write a novel, but I didn’t have the time or experience. So, I thought I’d do an autobiography,” he says. “It was a New York Times best-seller. I loved having a No. 1 book. It was life-changing — like getting my first Grammy. It elevated my status. I thought I was washed up, but I ended up on ‘The Late Show with David Letterman’ and in Rolling Stone magazine.

“People wanted another book. The only thing I could pull off was a cookbook….I’ve read so many cookbooks; most are boring. They’re just recipes in an electronic-like voice. I wanted to say it in my own voice. My book will put you in the kitchen quick. It’s things I’ve learned that make me happy.”

This cookbook may have been written with assistance from acclaimed food writer Josh Sens, but it is definitely in Hagar’s own voice. It’s got real recipes for the food he likes to cook and eat, such as “Sammy’s Wabo Shrimp,” “Chorizo and Pork Loin Paella,” and “Papaya-Marinated Chicken.” And it’s laced with its share of racy anecdotes. But hey, what kind of rock star would he be without at least a few of those?

When it came time to try a recipe from his cookbook, I knew immediately which one it had to be: “Sammy’s Veal Osso Bucco,” which he always says he’d pick for his last meal on this planet.

“I like to make it really juicy,” he told me. “It has gooeyness. It’s comfort food. It’s everything to me.”

It’s easy to see why. This one-pot classic braises in the oven for hours until the shank meat gets incredibly tender and the tomato-wine sauce thickens just so.

Hagar recommends serving it over linguini. I used egg noodles instead. If you’re using a can of imported diced tomatoes, you won’t need all of it for the braise. Save the rest as I did to toss with the egg noodles instead, before topping with the shank and some braising liquid. The flourish of fresh lemon zest at the end adds the perfect zing.

Tuck into a bowl of this and you’ll be very content. Don’t forget to scrape out the unctuous marrow in the bones to enjoy, too.

For more on Hagar, read my profile of him in the current Edible Marin-Wine Country. 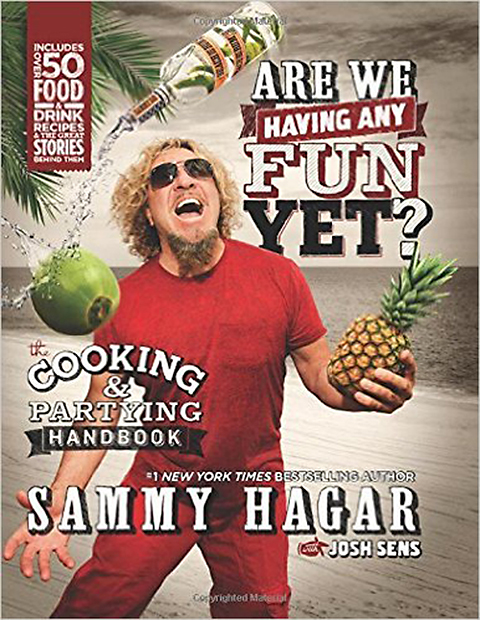 6 veal shanks, about 2 inches thick (I like the center cut, because it has the most marrow)

Preheat the oven to 300 degrees.

In a deep ovenproof pot big enough to hold all of the shanks, heat the olive oil and butter on the stovetop over medium-high heat.

Dredge the shanks in flour, shake off the excess, then brown the shanks on all sides in the oil-and-butter mix, about 5 minutes. When they’re good and brown, stand the shanks in the pan with the narrower side of the bone facing down. (If you put the wide part down, the marrow has a better chance of oozing out, and you don’t want that.)

Add the wine, stock, garlic, tomatoes, carrot, and thyme. The liquid should rise about two-thirds of the way up the shanks. You don’t want the shanks to be submerged. Bring the liquid to a boil, then reduce it to a simmer. Cover and cook in the oven for about 2 hours.

After 2 hours, check the meat. You want it falling off the bone, so if it isn’t, put it back in and keep checking every 15 minutes or so.

Remove the shanks and set them aside on a platter. Set the pot on the stovetop over medium-high heat and reduce the liquid just a bit. I like it just a little thick and sticky, and the flour you dredged the shanks in should help with that.

Garnish with lemon zest and parsley.

Sammy’s Note: With osso bucco, you want a starch. I like linguini. I cook the pasta ’til it’s almost al dente, strain it, then toss it in a pan on the stovetop to finish it, with a healthy coating of that tomatoey-meaty sauce from the osso bucco. Killer. A more traditional one-two punch is osso buco with risotto, and that ain’t half bad, either. Risotto is part of my standard repertoire, too, but it’s so rich, I prefer it as a main course.

It’s not difficult to make, but you’ve to to say with it, stirring it constantly, adding liquid to the rice as it cooks. You have to pay attention. So if you’ve got ADHD, pop a couple of Ritalin before you start.

When I serve osso bucco, I always put white bread on the table. Not a fancy baguette. I’m talking plain old presliced, store-bought white bread. Something bland and starchy. It’s just a delivery system for what’s going on top. First thing I do is spoon some marrow out of the shanks and spread it on the bread, with a squeeze of lemon juice and a sprinkling of parsley.

Then I dig into the rest of the meal.

From “Are We Having Fun Yet? The Cooking & Partying Handbook” by Sammy Hagar