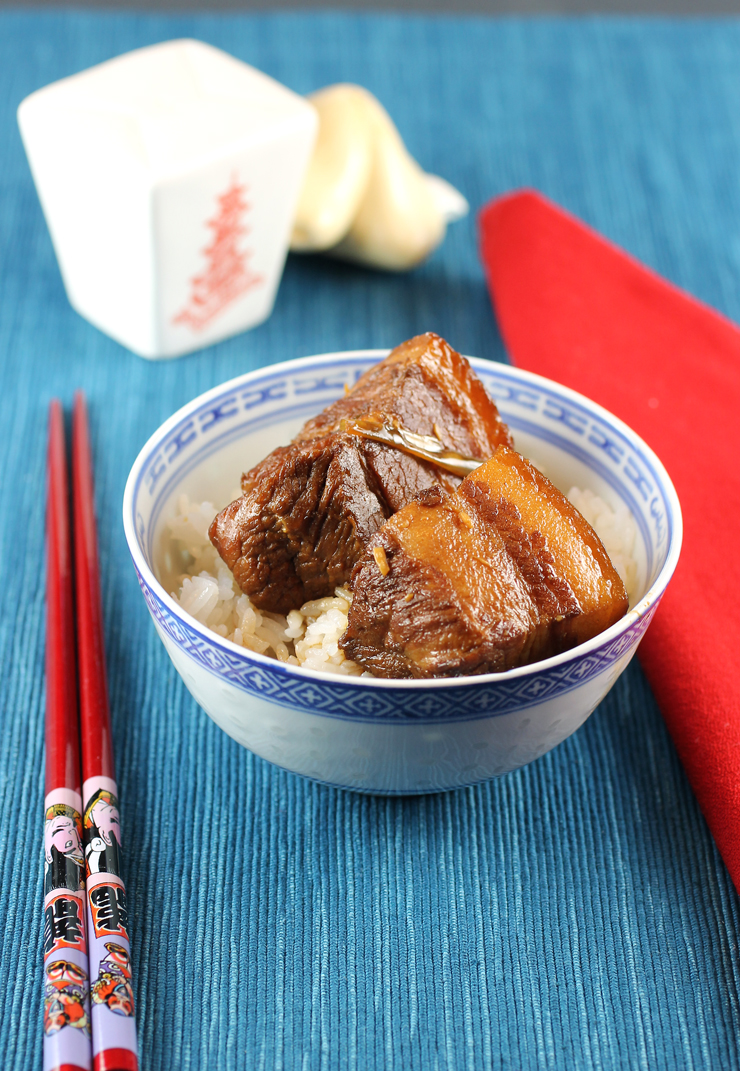 It’s no secret that the Chinese love the color red, which is festive, and symbolizes prosperity.

We also love our pork.

And no cut quite so much as the pig’s luscious belly.

Combine all three and you get “Red-Cooked Pork,” an iconic family-style dish of pork belly that’s cooked in a soy sauce-laced braising liquid that’s not really more brown than red. The “red” in the name, though, comes interestingly enough from the fact that the Chinese language doesn’t really have a character to describe “brown.” So, apparently, they opted for the next best color — red.

So writes Kian Lam Kho in his new cookbook, “Phoenix Claws and Jade Trees” (Clarkson Potter), of which I received a review copy. The comprehensive book just won the prestigious “Julia Child First Book” award from the International Association of Culinary Professionals. The book’s poetic name pays homage to the Chinese characters used as synonyms on Chinese menus for chicken feet and Chinese broccoli. 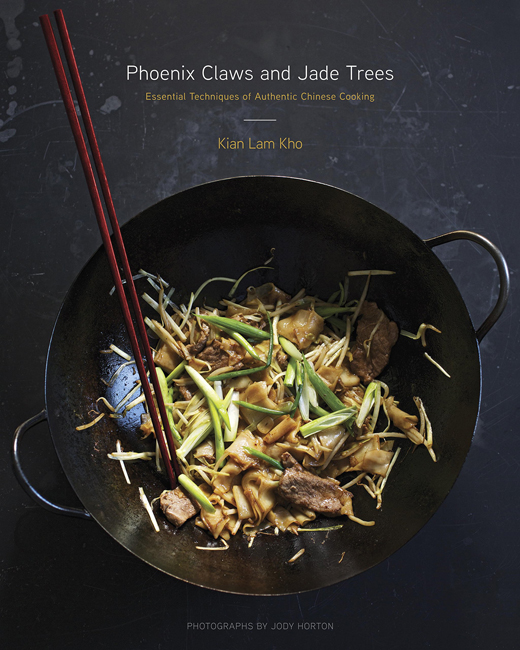 Indeed, if you are interested in learning more about Chinese cooking, this book is a must-have. Kho of New York City is a private chef, culinary instructor, and creator of the blog, RedCook. He’s written a book that deftly explains the fundamental cooking techniques of Chinese cuisine — from pan-frying to light frying, from flash-poaching to oil-poaching, and from simple steaming to flavored steaming.

There are plenty of photos, too, which help illustrate different vegetable cuts, butterflying a fish, and even the step-by-step cooking of a whole Peking duck.

What’s more, if you’ve ever been mystified by a trip to the Asian market, Kho helpfully explains — and shows — many fundamental ingredients, including various dried seafood, jarred pastes and dried spices.

Red-cooked pork is not a dish that I grew up with in my Cantonese-American household. But then again, I don’t think I can recall my Mom ever buying pork belly, either, probably because she was aghast at its preponderance of fat.

This is definitely not a dietetic dish, not when the meat to fat ratio is bordering on 1 to 1. There’s no denying, though, how delicious pork belly is, especially when it’s cooked tender with a cap of soft, melty fat attached.

It’s even better enhanced by the flavor of sweet, caramelized soy sauce laced with the warmth of cinnamon-y licorice notes.

The pork belly is first parboiled in water to remove impurities before it is braised in two types of soy sauce, Chinese cooking wine, and star anise.

I ended up doubling the recipe. If you do, just be aware that it will probably take half an hour longer to cook the pork belly until tender.

Kho likes to serve this brothy dish with steamed buns. I prefer it with a bowl of steamed rice to soak up all that delicious sauce.

With our more health-conscious ways these days, pork belly may not be an ideal everyday meal. But when you can let yourself so indulge — wow, what a treat it is. 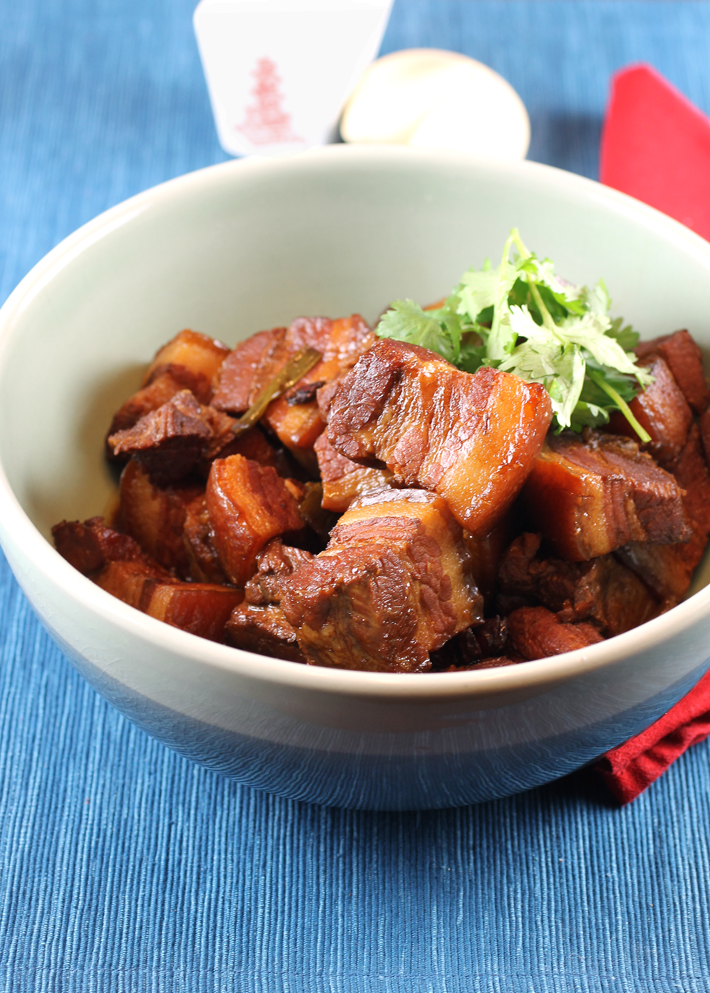 (Serves 4 as an appetizer with steamed buns; or 2 as a main course paired with a vegetable dish)

1 1/2 cups pork stock, the liquid from the parboiling, or water, plus more as needed

Put the entire pork belly in a stockpot and add enough water to cover the meat completely. Bring the water to a boil, then turn down the heat to medium. Parboil the pork belly, uncovered, for 20 minutes, continuously skimming off the scum that forms on the surface. Drain, and let the pork belly cool. Then cut into pieces about 1 1/2 inches square.

Combine the sugar with 3 tablespoons water in a wok over medium heat. Continue heating until the sugar syrup just begins to turn yellow. Add the cubed pork belly to the wok and brown it with the caramelized sugar, stirring the meat regularly to prevent burning. If you like, cover the work with a splatter guard to prevent the fat from splattering.

Add the garlic, scallions, star-anise, both soy sauces, wine, and stock to the wok. Bring the liquid to a boil, then transfer the contents to a clay pot or Dutch oven. (Alternately, this dish can be cooked in a slow cooker.) Simmer, covered, over low heat, stirring the meat every 15 minutes to prevent scorching the pork on the bottom, for 1 hour or until the meat is tender when pierced with a knife. (Note: If you double the recipe, it may take an extra 30 minutes of cooking to get the pork tender.)

Remove the meat and put it in a bowl. Reduce the sauce over medium-high heat until it reaches the desired consistency. Return the meat to the pot and reheat before serving.

From “Phoenix Claws and Jade Trees”  by Kian Lam Kho 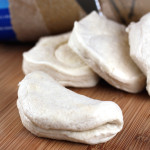 To Serve Alongside: Shortcut Steamed Buns From Biscuit Dough 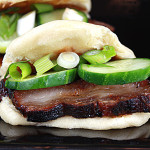