Itani Ramen — Where Noodling Around Is Fun And Delicious A rice bowl with eggs three ways at Itani Ramen.

You have to smile at place where the bathrooms are identified as: “raMEN” and “raWOMEN.”

Itani Ramen takes its food seriously, but everything else with a sense of humor.

The second restaurant by Chef Kyle Itani of Hopscotch in Oakland, Itani Ramen opened a month ago in Oakland’s Uptown neighborhood.

I had a chance to try it two weeks ago when I was invited in as a guest of the restaurant. It happened to be a night when Itani’s good buddy, Chef Daniel Holzman of New York’s The Meatball Shop empire, happened to be helping out, serving dishes and chatting up diners. Holzman also assisted in the kitchen when Hopscotch first opened. And it’s his photographs of colorful street scenes in Japan that grace the walls of Itani Ramen. 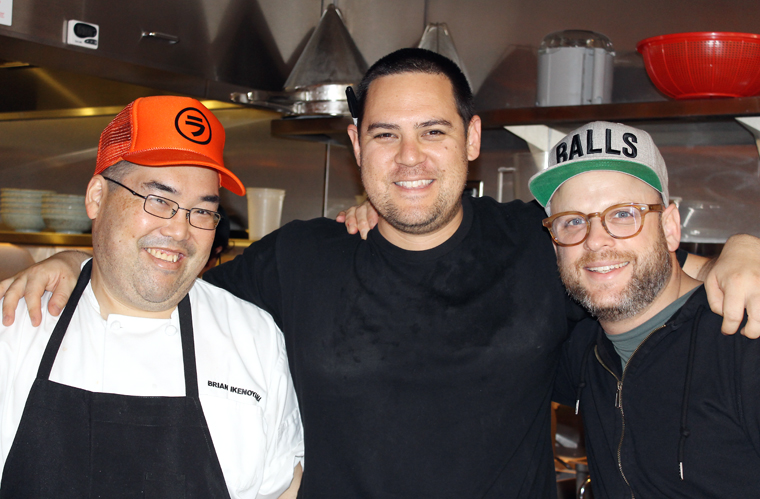 The long restaurant is industrial-zen looking with unfinished wood on the back wall that gives it an almost shoji-screen-like look. Packages of Japanese instant ramen and bottles of sake decorate shelves above the bar and open kitchen.

Chef Brian Ikenoyama oversees the restaurant on a day-to-day basis. It’s a streamlined affair, where you order at the counter right when you walk in. You’re given a number that you prop up on your table, so the server can bring your food when it’s ready. It makes for speedier service, too. The bar and open kitchen. 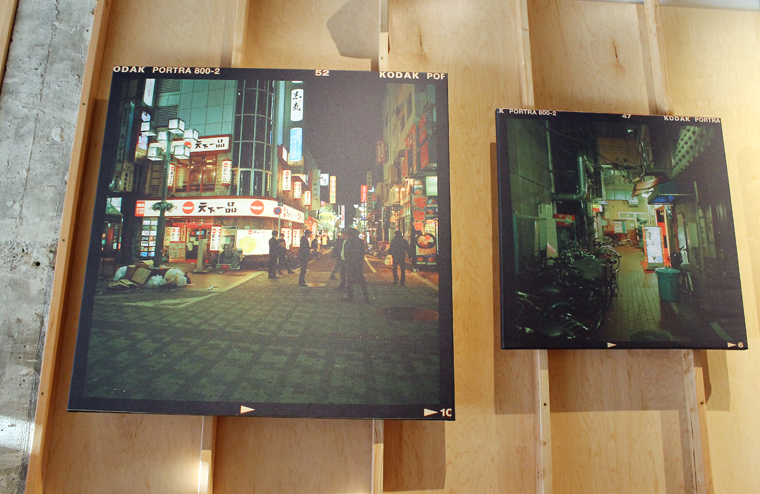 Holzman’s photos of Japan adorn the back wall.

Pork gyoza ($7 for five; $13 for 10) are a must-order. Filled plumply with pork and garlic chives, they arrive deeply golden and crisp on the bottom. At each table, you will find a laminated card instructing you on the best way to mix your condiments for the gyoza. This may seem unnecessary, but as Holzman explained, the goal is that you not go overboard on too much soy sauce or too much vinegar, and that you drizzle on the chile oil separately so it doesn’t get lost in the mix. Point taken. 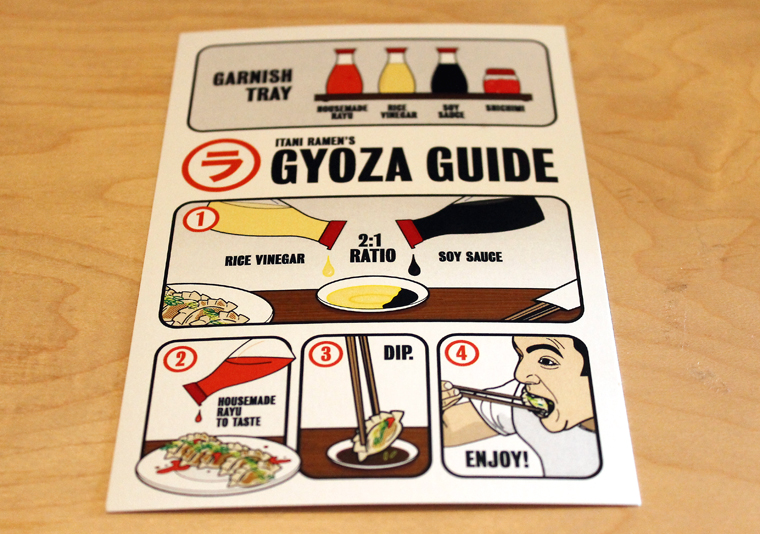 The obasan vegetable pickles ($5) brings a small bowl of delicious sweet-tangy-umami-laced carrots, burdock root and mustard greens that are great to nibble on between bites of other dishes.

The mini rice bowls are great to share as an appetizer or to eat by yourself if you’re seeking lighter fare. The “Egg 3 Way” ($15) tops the plain white rice with uni, salmon roe and a soft boiled egg, its yolk the color of a tropical sunset. Eggs and rice — so simple, yet so satisfying, and made more special with the briny-sweet custardy uni. 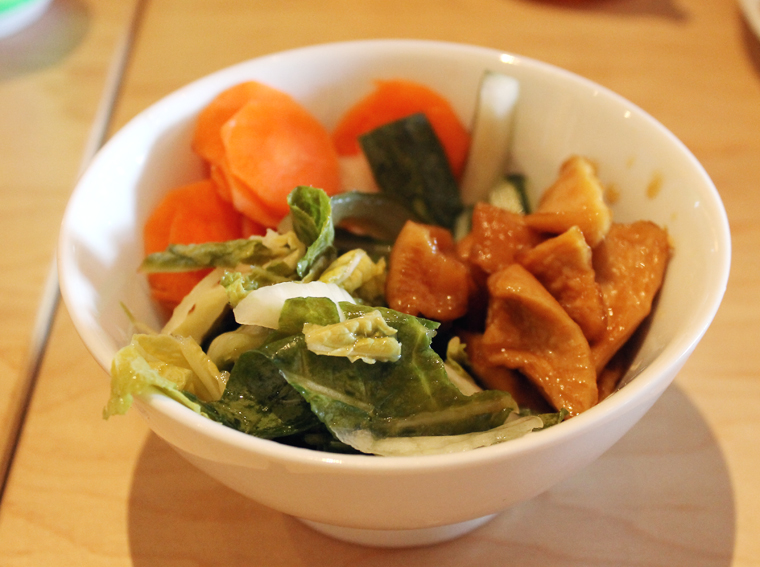 My husband opted for the “Shio (Salt) Spring Ramen” ($13), sporting a cloudy, rich, deeply porky broth. It was garnished with juicy, fatty slices of cha siu pork, bamboo shoots, green onion, and another soft egg half. Itani Ramen ambitiously makes its own noodles fresh every day. You have to give them credit for taking the trouble to do that. The noodles were supple like fresh pasta, but I only wish they had a little more springiness to them like characteristic ramen ones.

“Shoyu (Soy) Spring Ramen” ($12) brought forth a lighter dashi broth that wasn’t overly salty in the least and sported a subtle seafood note. Ground chicken, yu choy, bamboo shoots, green onion and half an egg bobbed in the broth. 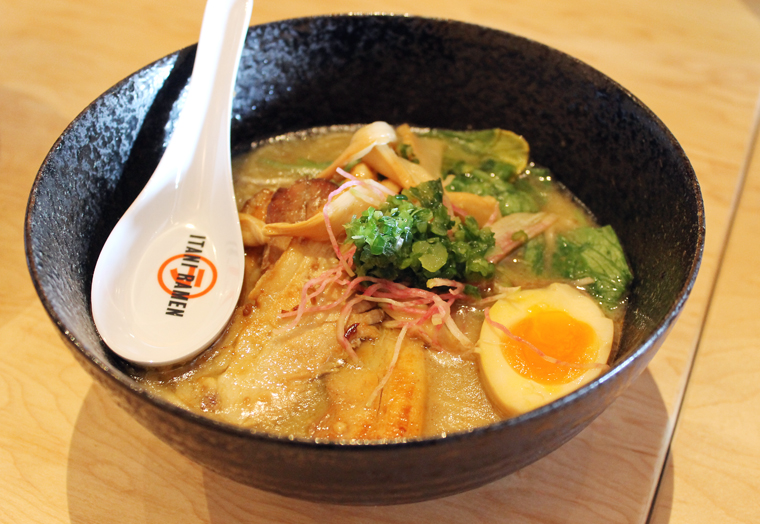 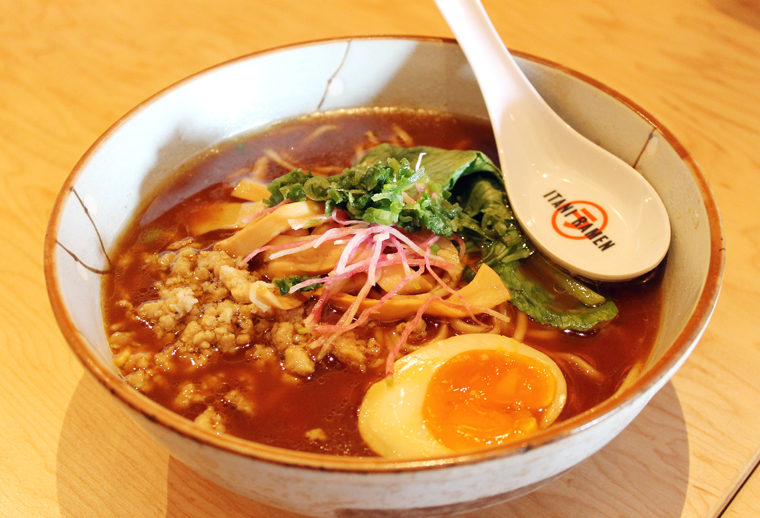 Itani Ramen doesn’t serve dessert — at least not in the conventional sense. Instead, there is a vending machine by the door that’s stocked with Pocky sticks, It’s Its, and assorted Japanese sweets. Feed in your coins, make your selection and take it on your merry way. “This place has been super fun,” says Itani, who is of Japanese and Italian heritages. “We didn’t want it to be too expensive, but to still have a high level of food.”

The next time you’re in Oakland, check out a ramen place with a personality all its own. 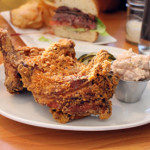