A trio of Tacos at Tacolicious Santana Row.

The newest Tacolicious took the longest to build.

Two years of lease negotiations and permit approvals to be exact.

Owner Joe Hargrave said at times he wasn’t sure it would ever open. But thankfully, it did, joining four others in the Tacolicious mini empire when it debuted last year at San Jose’ Santana Row.

It’s a sliver of a restaurant, once housing an Italian coffee shop. A bar with seats and a narrow kitchen take up most of the space with a few compact tables inside. It’s already proving a popular spot, as I found out when I was invited in as a guest a few weeks ago. Even on a weeknight, every seat was taken, and about half a dozen folks outside were waiting to get in.

Chips and salsa are set down for you to nibble as you look over the compact menu. Of course, a beer or cocktail is just the ticket to go with that. If you’re a horchata fan like I am, try the house-made one stirred up with Siete Leguas Anejo tequila, chocolate bitters and a dash of nutmeg in the “Papa Noel” ($12). There’s a hint of citrus from the nutmeg and an almost coffee-note thanks to the chocolate bitters. It’s creamy with a kick — just what you want on a winter night. Chips and salsa to start. Along with a cocktail blended with house-made horchata.

Of course, one must have tacos at Tacolicious.  My husband and I shared four ($17.95): chicken en mole Colorado, Baja-style Pacific cod, Guajillo-braised beef brisket, and the “Taco of the Week” — crispy fried chicken.

These are substantial tacos, each doubled up on the tortillas, and mounded with 3 ounces of filling. To get an idea of how much that really is, consider the brisket, tender shreds redolent of cinnamon. It was impossible to really fold up and take a bite out of unless you have a Tyrannosaurus Rex-sized mouth. Instead, I took the bottom tortilla, scooped half of the meat onto it, and left my husband the remainder. His taco was still so full of meat, you would have thought I hadn’t helped myself to any of it. Take a seat at the bar or one of the small tables along the side. A view into the kitchen. The colorful back wall.

The chicken mole was saucy and earthy. The fish taco was heaped with cabbage and unexpected cumin crema that really distinguished it. The fried chicken arrived as almost nuggets. Hot sauce aioli gave it all a kick like spicy popcorn chicken.

Albacore tostadas ($13.95) are palm-sized and sturdy enough to pick up with your fingers to eat. Fresh avocado slices and chipotle mayo add a lot of creaminess, but not so much that the fish gets lost in the process. 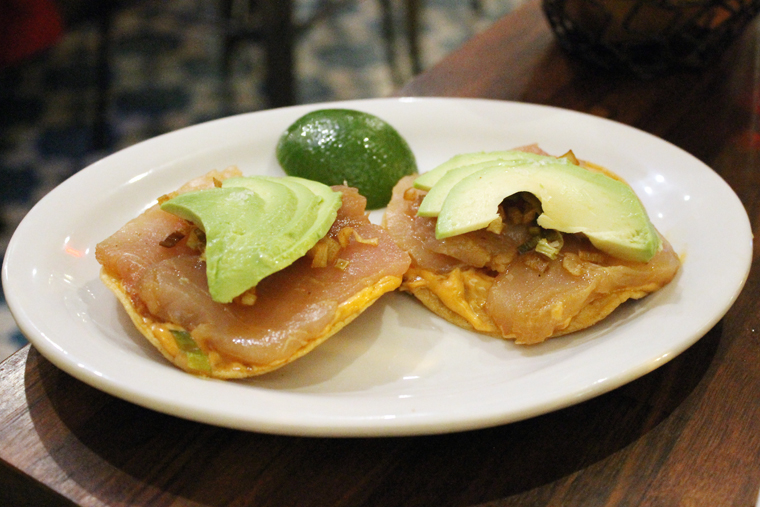 Albacore tostadas. Squirt on the lime and take a bite.

A trio of sauces come with the tacos. But don’t forget to ask for the off-menu “orange sauce.” It’s a take on the famous one at La Victoria Taqueria with locations in San Jose, Santa Clara and San Carlos. It is indeed orange, hitting about medium on the hotness level, with a nice tomato taste, and a smooth creaminess. Three salsas to embellish the tacos. 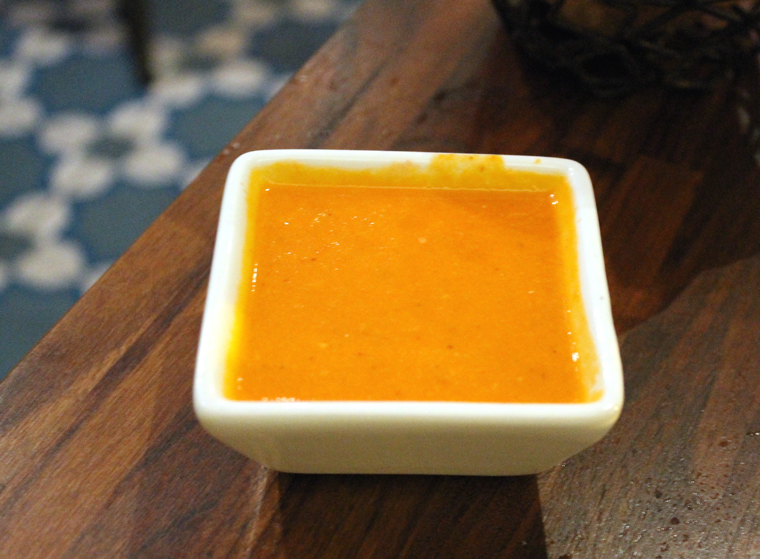 Don’t forget to ask for the orange sauce.

Our server recommended the fried Brussels sprouts ($8), and I’m so glad we took her up on that. These are addictive — crisp, smoky, tangy, and a little sweet. Just try and not devour the entire dish. Impossible.

Fried sweet plaintains ($9.50) come arrayed atop refried beans and more of that wonderful cumin crema. They’re starchy, soft and thick enough to drag through the refried beans for a Mexican take on stuffed potato skins. Brussels sprouts to die for. For dessert, we went with the traditional churros ($8.50), served with a cup of warm chocolate sauce as thick as pudding. The churros were deeply golden on the outside and arrived hot out of the fryer. I only wish they had been left in a little longer as their interiors were underdone, not unlike pancakes that aren’t fully cooked in the center. 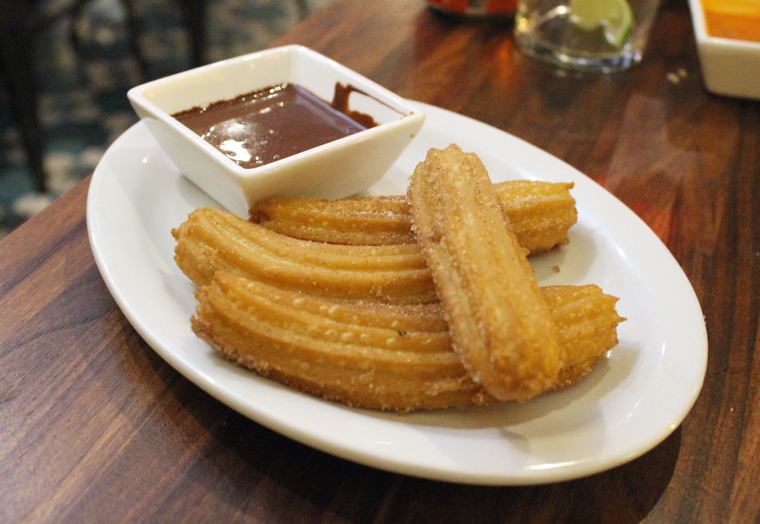 Does San Jose, which is full of taco trucks and taquerias, need another taco joint? I say, the more the merrier, especially when the tacos are this fun and satisfying.